After experiencing a bull run for decades, the price of gold has been on an incessant decline since its high in 2011 - and is down a whopping 40% since then. Given prices plummeted around 5% in the last week alone, this shiny metal is making headlines both in popular and financial press. Is it time to buy? 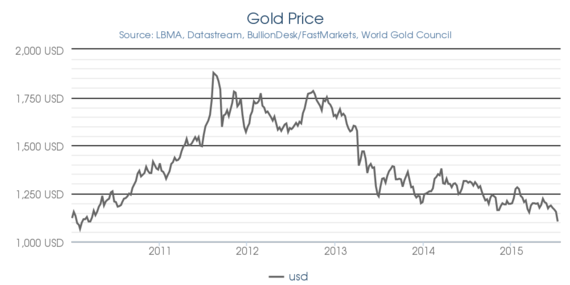 Besides its use in jewelry, gold is used for many purposes around the globe, both in its real form (solid, raw material gold) and in its investment form (contracts that represent holdings of gold). To make a guess at the direction of gold prices, you need to have a view of these drivers. After looking at the evidence and research, I have concluded that if you like gold jewelry (like me), now's not a bad time to pick up some pieces. However, if you are thinking of buying or selling gold as an investment, you better find a high conviction opinion on what's going on in China- and I don't think that is an easy thing to come by.

To understand the pivotal role of China, we need to look at the basics of gold demand overall (supply just hasn't been a big driver). Gold has historically been seen as a store of value, and a universal alternative to holding cash, as it is a rare commodity and widely recognized for its value. In today's environment, physical demand broadly falls into the two categories mentioned above. While the real gold use is dominated by jewelry manufacturing, it is also a component in electronic and other technology as well. Investment demand for gold includes transactions in bars and coins, and in vehicles like Exchange Traded Funds (ETFs). While purchases by central banks are significant and often counted separately, I view them as an investment demand as well. 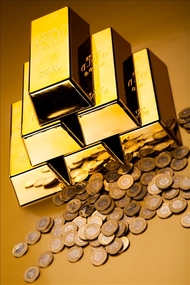 Rather than focus on real demand, most headlines in the financial press attribute the fall in gold prices to the view that inflation fears are low and/or falling. In the past few months, the Federal Reserve Board has stated its intentions to raise interest rates this year. As market participants are worried that they are hiking too soon, and that economic activity will be squashed, inflation will fall again. Why should gold prices move as a result? The belief is based on its store of value property. In inflationary times, the reasoning would suggest more people buy gold and store their wealth in this physical commodity, in order to protect it from the likes of inflationary central banks that print money or that keep interest rates too low. If people aren't worried about inflation, they won't hold as much gold and prices will fall. While that correlation appeared to exist in 1970s -1990s, it has failed ever since. In fact, researchers (click here) have found no significant link between the returns on gold and the movements in inflation. So while the reasoning makes sense, in reality the strategy of buying gold to protect against inflation hasn't worked.

There is more evidence on a country level basis that people tend to buy gold when they are worried about political unrest, or large economic crises that could affect the value of their cash or their ability to get it out of the bank. For example, when the Turkish lira weakened dramatically due to bad monetary policy and election uncertainty, Turkish residents sold massive amounts of their gold holdings in order to generate income. The cash notes in the bank or the mattress just didn't pay the bills. There is plenty of uncertainty in the world today: ISIS, Iran, Europe, Russia, Ukraine, bird flu, Ebola, etc. Yet gold prices have fallen throughout all this time of turmoil.

I believe the clues for low gold prices lie in the marginal buyers and sellers of gold in the world today. We can rule out ETFs as the culprit; while demand has definitely fallen dramatically, the total gold backing these funds is miniscule compared to the rest of the gold market (3%). Central bank purchases are bigger, but have been steady to slightly climbing, and comprise about 10% of world demand - so they aren't the cause of the rout. That leaves jewelry, and bars and coins...and the biggest players are the Asian customers, where India and China have been the heavyweights for years. In the first quarter of 2015, for example, Chinese and Indian consumers accounted for 54% of world jewelry demand, and nearly 40% of bars and coin demand! To forecast where gold prices are going, investors need to know where their demand is coming from and heading to. 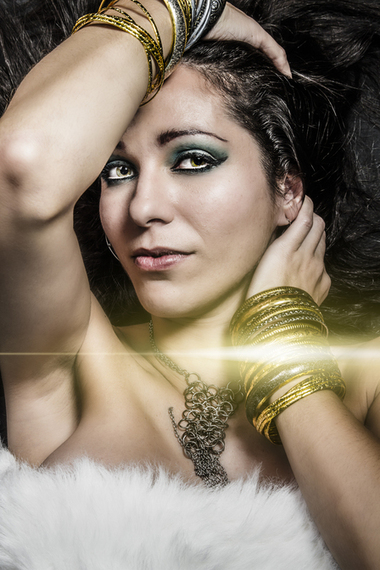 In India, higher gold prices are associated with good times (the wealthier you are, the more of the 24K yellow stuff you buy), but also with political uncertainty. If the government has problems, Indians rush to buy gold to store their wealth. They are very comfortable with stockpiles of bracelets and necklaces. Right now, the country is experiencing relative economic AND political stability, so demand volatility is leveling off, and not likely to push prices significantly in the near future.

That leaves China. As in India's case, when times are good, Chinese buy more luxury items including gold jewelry. Times are definitely not so good now, but the government is working hard to stimulate the economy. It's too early to tell if that will work. Perhaps as importantly, Chinese citizens are active investors - in the stock market and in the gold market, where they tend to be trend/momentum followers. While the equity market was on the rise, money poured into stocks while depressed gold was ignored. Recently the Chinese stock market has plunged, and the government intervened as the mom-and-pop investors were burned badly. Where it ends up is really a guessing game, in my opinion. Since the only obvious trend in town seems to still be lower prices for gold, I don't see the Chinese investors propping up the commodity at this point. So, unless you feel strongly that the Chinese economy is about to take off, or if there is about to be a new gold jewelry fad in Asia, gold is not a clear investment recommendation even at these "cheap" levels.

To read more about the fascinating world of gold, click here.