While myths are fostered in reality, they are constructs manufactured by our own design to grasp abstractions, assuage fears harbored in an unpredictable world, and offer glimmers of hope that something exists beyond the elasticity of mortality. J.T. Burke's debut exhibition Beautiful Again: Perpetuating the Myth of Paradise features 26 artworks, specifically digital collages of jewelry or "bling," as Burke calls them, that the artist collected at swap meets, antique stores and private collections. The second-hand jewels are delicate and handcrafted and appear in the guise of peacocks, hummingbirds, frogs, Faberge eggs, rabbits, flora, wide-eyed owls and even a demonic boy with wings. What were once jewels worn by owners long forgotten are given a new life not for their function as jewelry but for their form as art objects. Furthermore they are vehicles that "perpetuate the myth," because they symbolize an earthly paradise and have been re-born in their re-appropriation in digital collages. Burke explains than when selecting pieces to include in his collages, he prefers to "use old, worn, second-hand pieces because [he] appreciates their interesting patina of wear but also for the notion that of these pieces lived with someone as a part of their life, their own façade of beauty." Burke continues that he "frequently finds these pieces with a few strands of the former owner's hair still on them." 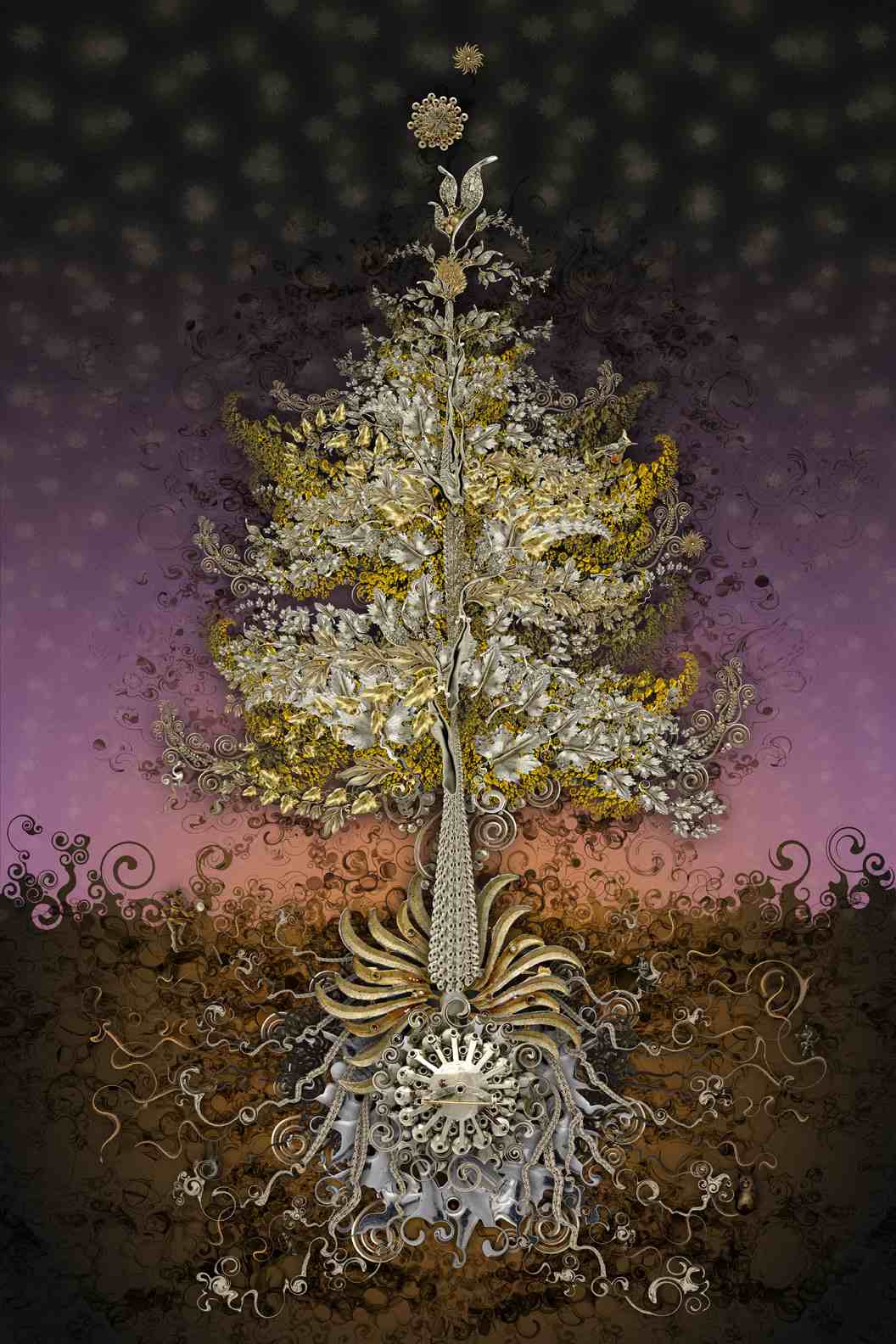 Although Burke considers himself a "rat pack collector of odd things," he was never a jewelry collector, and never knew much about it. He first began using jewelry as a compositional element in his photographs and soon realized that "composing images made entirely of 'bling' offered a stunning visual opportunity." This "opportunity" marked a new chapter in Burke's artistic career. Beginning in 1984 he worked as a commercial photographer, cinematographer, and graphic designer and then adopted digital practices in his studio in 1990. After 20 years of working in the commercial realm, Burke admits that he "discovered a huge gap between personal vision and commercial viability... it's very hard to make personal statements that have an advertising angle to them." Having developed a fluency with cameras and computer software for his commercial practice, Burke has been able to use his sophisticated skill set to create elaborate compositions, and create works that are the opposite of what he created during his commercial years, and are in fact "rebellious actions to [his] past experience." By 2005 Burke and his wife artist Lorraine Angela Triolo decided to sell their studio and stock photo agency and move into the next stage of their careers, re-opening BurkeTriolo Studio as a fine art studio and publishing house in 2006. 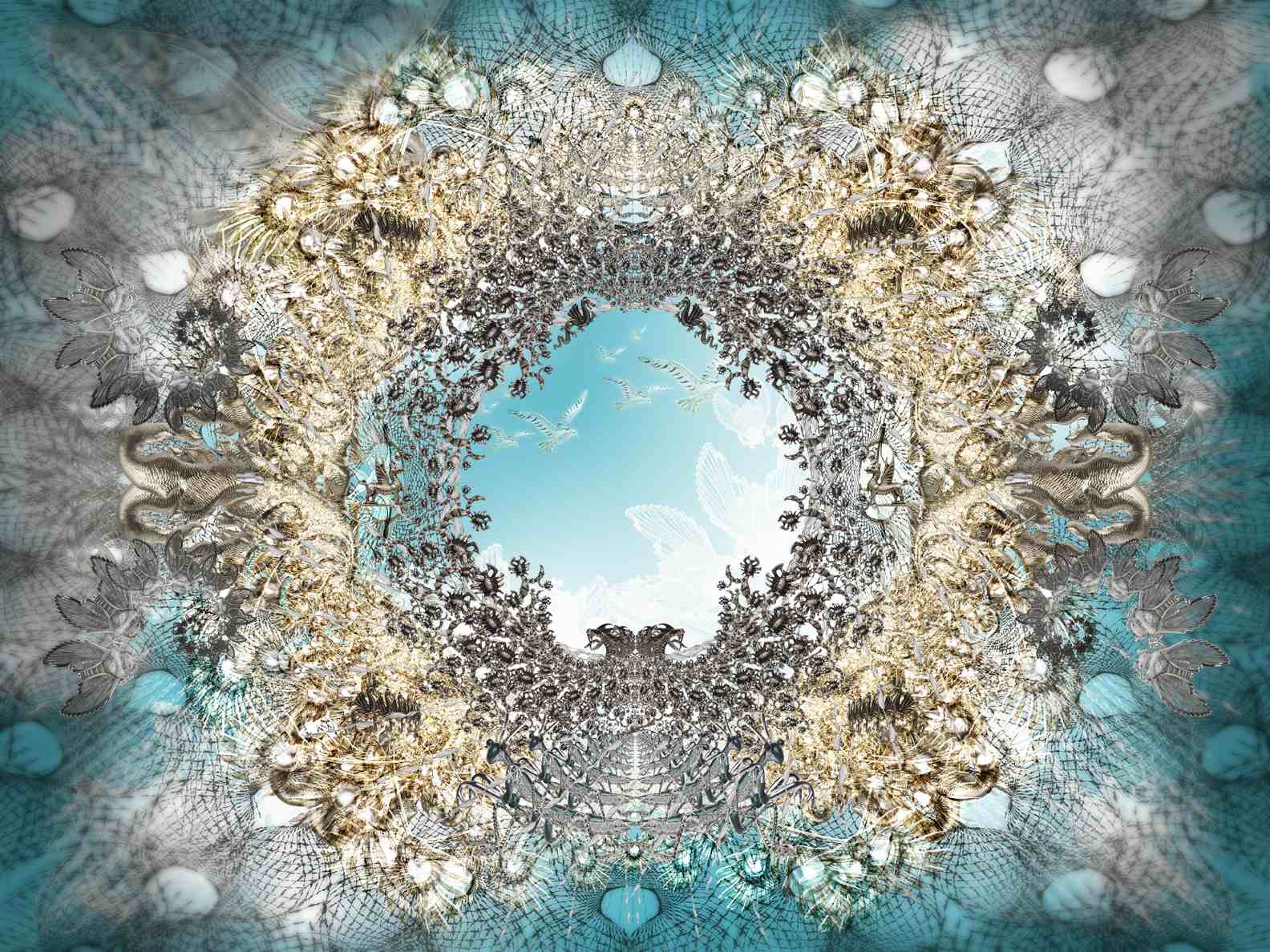 "Portal to a Beautiful Place"

The compositions in "Beautiful Again" are large format digital images influenced by ancient Rome, Renaissance manuscripts, Muslim arabesques and Hindu Tibetan mandalas. The ambitious exhibition travels to three different cities, Santa Barbara, California, Barcelona, Spain and Bristol, England. All the works were created using a digital catalog of 2,000 images of "bling" and counting. Once Burke hunts down pieces, he photographs each piece individually on a white background in his studio and enter the piece into a digital catalog. Then the trial and error process of creating a new composition begins, where many attempts are often abandoned while others endure hours of study and scrutiny. The compositions are then printed in the studio and vary in size and number. His largest and newest piece "A Beautiful Day at the Beach" is 107 x 40'' while many are 36 x 24'' in an edition of eight. With an art practice so deeply connected to technological advancements, Burke explains that he has recently discovered printable latex wallpaper that can be fed through his printed. Experimenting with printing and installing on a 10 x 35' wall image in a building entryway has allowed Burke to display his images in a grander scale and has inspired him to pursue the possibilities of his medium.

Through a digital process that is as complex and magical as the notion of paradise itself, Burke enlivens static objects into characters like the little demonic boy in "Evil Boy and His Minions" (2009), a sterling silver figure who assumes the role of a young Satan in a hell comparable to Bosch's "Garden of Earthly Delight." Surrounded by a whirlwind of serpents, hawks, grasshoppers and a swarm of ferocious bees, the piece references the Bosch's panel of a grueling hell after the fall of Adam and Eve.

A mad hatter rabbit acts as the central figure in "Big Opening Number" (2009) is another one of Burke's favorites. Surrounded in a kaleidoscopic flurry of lavish magenta jeweled exotic birds and glittering flora, the single gaping tooth and wild emerald eyes of the rabbit as he confronts makes evident Burke's ability to transform static objects into multifaceted characters. 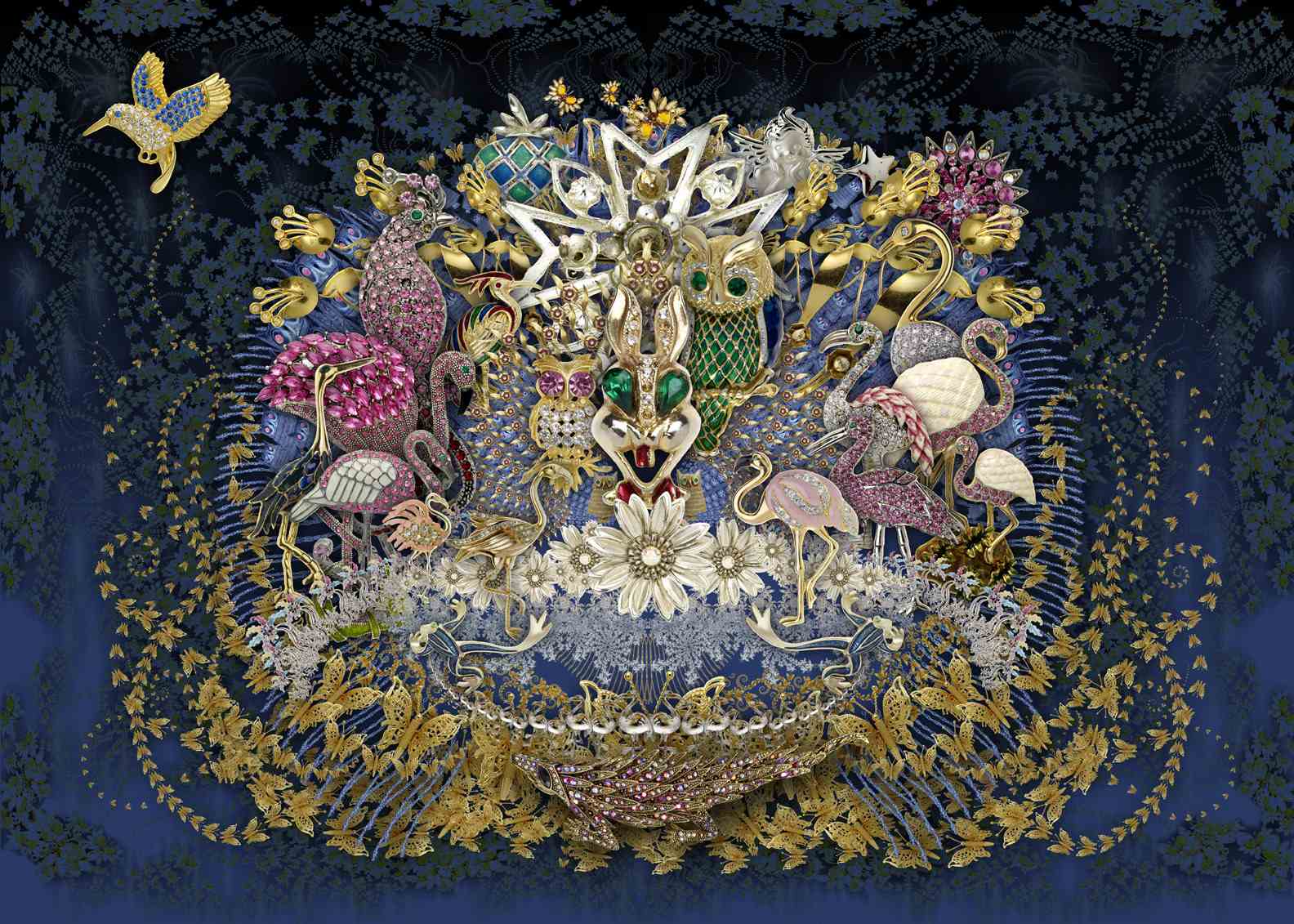 Through digital collage J.T. Burke enlivens second-hand jewelry from the past with a new life, while injecting a mesmerizing sparkle that makes for an optical wonderland. 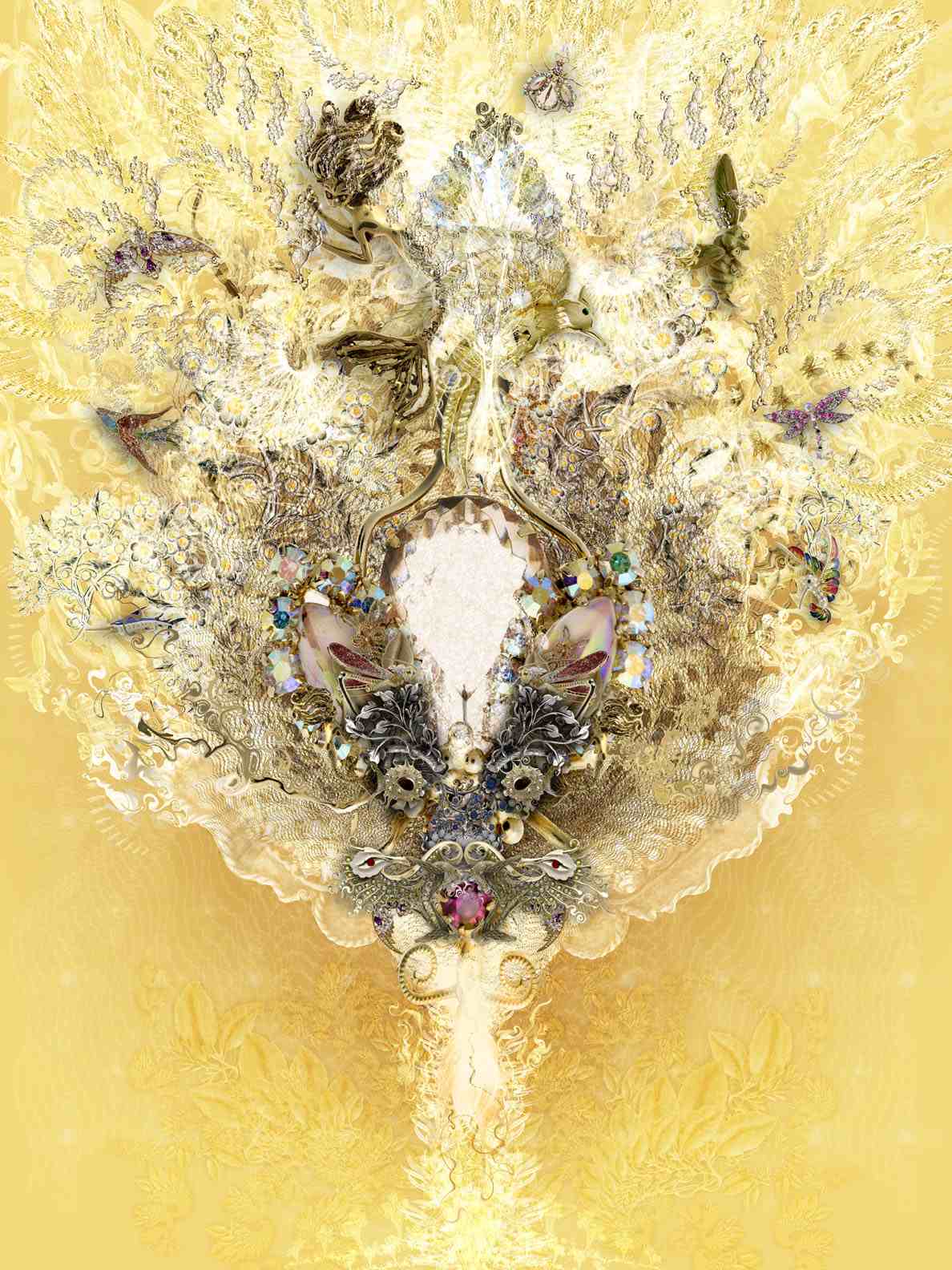