It doesn't matter what state you're from, if you're an American, comfort food almost always equals Southern food. Fried, stewed, slow-roasted, or smoked, these are the dishes that hit you at your core, that wrap you up like a bear hug from mom, that taste, as cliché as it sounds, like home. When I was a kid growing up in Texas, I couldn't get enough of it (Southern cooking, I mean, not hugs from mom -- I was good on those).

I haven't called Houston home since the late '90s, but those cravings -- along with a strange affinity for Garth Brooks -- never left my side, overtaking my body like Mississippi kudzu vines. I spent two summers driving around the South, eating my way through state after state under the guise of shooting my masters thesis film. I'll tell you, one trip to Bojangles' and you're in it for life -- there's a reason it's called soul food.

But how could you ever choose between impossibly tender pulled pork and finger-lickin' fried chicken? Pecan pie and peach cobbler? You don't, because we already did. These 27 classics, judged by popularity, regional importance, taste, texture, and emotional response, represent the best of the best in Southern cooking.

27. Fried okra
When fried whole in generously spiced, eggy batter, okra can make for a respectable side dish. But, more often than not, they're bland, mushy, bite-sized nuggets and not worth the sodium intake. You just can't trust 'em, and when it comes to comfort food, reliability is of the utmost importance.

26. Boiled peanuts
It's clear that boiled peanuts are a thing, but, like, why? They might be a slight upgrade from boring-as-hell ballpark peanuts, but all they really do is fill your mouth with 30-45 seconds of admittedly delicious flavor, get your hands all wet and smelly, and make a huge mess. Apparently the real OGs eat the shells, too -- just try and wrap your head around that one.

25. Chitlins
The thing about chitlins -- or chitterlings, or chittlins, depending on who you ask -- is that, if you think about it, they're pretty gross. But chopped-up hot intestines, fried and/or slow-boiled in a stew, truly speak to the Southern nose-to-tail way of cooking and hold such historic significance for so many families down South that they're a no-brainer for this list, albeit a hold-your-nose-and-suck-it-down one.

24. Pimento cheese
Here's the thing: pimento cheese is insanely delightful. Smearing a zesty scoop on a Ritz cracker or a slice of white bread is straight-up heavenly. At the same time, when you really think about it, it's actually pretty disgusting, like briny, chunky mayo left out in the sun. Some swear by the stuff, others won't touch it, but it will always, always have its place on the picnic table.

23. Fried catfish
The Gulf states produce far more of these freshwater bottom feeders than any other place in the nation, making the region catfish ground zero. They're at their best deep-fried, preferably eaten at an outdoor fish fry with 30 or 40 of your closest friends and family, but their tendency to taste a little, uh, muddy undeniably takes them out of the running for best Southern dish.

22. Deviled eggs
When whipped up well, these little bundles of texture and tang are the highlight of any good backyard barbecue and go down way, way easier than they should considering their substantial calorie count. They may not be God's gift to the waistline, but they're still church food at its finest.

21. Brunswick stew
Northerners are probably scratching their heads at the very notion of Brunswick stew, but that's what makes it great. In reality, it's a fairly basic dish: tomato-based broth, lima beans, corn, okra, other random veggies, and chicken (though some old-timers still swear by opossum, squirrel, or rabbit instead). No matter how you cut it, though, it's smoky, robust, and if you grew up in Southeastern Virginia, as rejuvenating as a Saturday tent revival.

20. Country ham & red-eye gravy
Thick-cut ham slabs dressed in a thin glaze of coffee-spiked, savory red-eye gravy pale in comparison to barbecue or fried chicken. But based on its long history, inoffensive nature, and relatively easy prep, this dinnertime go-to, uninspired as it may be, deserves its due credit for sure.

19. Peach cobbler
Does peach cobbler, with its signature chunks of crumbly, sugary crust and warm, syrupy core, deserve to fall so low on this list? Probably not, but even cobbler diehards will concede that it's not the most exciting dessert on the block. Pound for pound, pie wins out every time. Throw a few fresh peach slices and a scoop of hand-churned vanilla ice cream on there, though, and now we're talking. 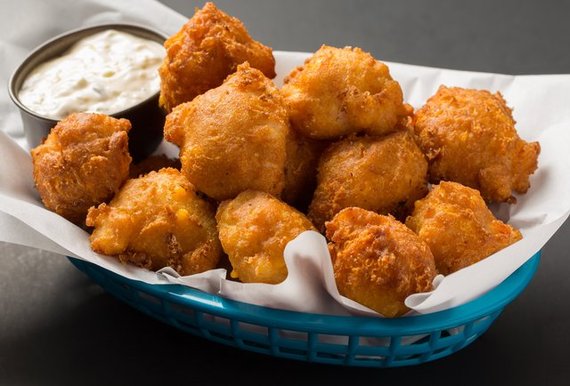 18. Hush puppies
If you know anything about Southerners, you know that they'll fry up just about anything, including something as innocuous as a damn bite of cornbread. But it turns out that hush puppies -- that's cornmeal fritters, not loafers -- make for a pretty decent side dish. They're no buttermilk biscuits, but they'll do in a starch-starved pinch.

17. Red beans and rice
Got a case of the Mondays? Load up on this Creole comfort food, traditionally eaten on the first day of the week to make use of Sunday leftovers. It's stewed for hours with ham hock, vegetables, and white rice, and will surely cure whatever ails you -- even if it can sometimes approximate salt-lick soup.

16. Sweet potato casserole
Throughout most of the country, a Pyrex pan brimming with smooth, luscious sweet potatoes, cloyingly sweet and topped with toasted pecans, is merely a supporting actor in a crowded Thanksgiving pageant. But below the Mason-Dixon, you better believe this dish takes a starring role with plate-scraping showmanship.

15. Chicken and dumplings
A chilly Appalachian night is no match for a massive pot of this soup-stew-casserole hybrid, bubbling away on the stove like a strangely pleasant swamp. It's not an everyday food by any means, but what it lacks in versatility it absolutely makes up for in instant, belly-warming comfort.

14. Hoppin' John
Hoppin' John, a mixture of black-eyed peas, rice, Vidalia onions, bacon, and about half a shaker of Lawry's seasoned salt, is a New Year's Day tradition throughout the South. Down a bowl or two of this stuff on January 1st and you just might come into some serious cash-money over the next 12 months -- either that or some serious bloat for the next 12 hours.

To find out which Southern comfort foods made the top 13, get the full story at Thrillist.com!

Is Ranch Bad on Anything? I Tried It on 18 Weird Foods.

The Best Barbecue Joint in Every State