It's like you can't walk out the front door of your SF flat on a fine, frolicky Bay to Breakers Sunday and not see a dozen wasted, festering kids weeping on the sidewalk, stumbling into parked cars, breaking beer bottles, vomiting into their tassels or bleeding all over their glitter wigs, unsure where they are or how they ever ended up in a giant, furry sparklepig costume in the first place.

It's like you can't make it past about 2 p.m. on day of same without having to actively avoid multiple knots of belching frat guys, lurching tech bros and swivel-headed party girls, all banging into the each other like bumper cars and screaming down the street at someone they think they sort of know.

Still just as true as ever: What starts out as a fun n' freaky footrace celebrating SF's famously free spirit devolves shockingly quickly into a lurching, bombed-out vomitorium of wildly uninteresting twentysomethings staggering drunkenly through the streets, making an easy mockery of the event, the City, themselves.

Fun! But not really. 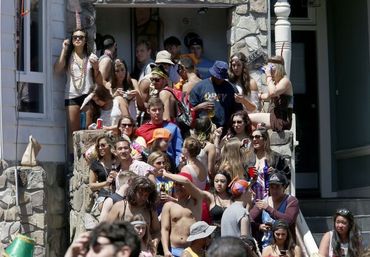 Was it always this way? Maybe it was always this way. Except it wasn't. I've lived here long enough to track the energy and the tone, and B2B has actually become just a little bit worse every year, uglier and drunker -- at least, in the afternoon. I don't know the exact threshold for when famous citywide parties cross over from terrific, sillyfun spectacle to embarrassing vomitfest -- I tried to ask the two guys at the packed bar down in the Marina, but they were too busy beating each other up. In a rage. In toga costumes.

But it's always a depressing shift. One friend told me of the Sunday morning charm of seeing a group of ancient, wheelchair-bound denizens from a retirement home on McAllister, all carefully wheeled outside and parked along the sidewalk to watch SF's historic roving dance party -- the oldest footrace in the country, mind you -- stream by.

To my friend's delight, numerous revelers came up to the old folks, smiling and kind, gently shaking their hands, explaining their costumes, making simple, but wondrous contact with the neglected nonagenarians.

Wonderful, right? In the first part of the day, events like Bay to Breakers are almost always upbeat and inspired, everyone sober enough to realize what a strange, wonderful life this is, and what amazing way to spend a blustery, sunny Sunday in one of the finest cities in the world.

Just a few hours later, it's an entirely different story.

This is when the (apparently) countless thousands of twentysomethings who trekked in from all over the Bay Area and pre-planned to get obnoxiously hammered by Mile Marker Four, succeeded. This is when the tone of the entire event shifted, for the worse. This is when any sense of playful joy you might have been cultivating turns into a sickly shame and embarrassment for your City, for your neighborhood, for all the young, dumb drunks who make locals wince and area businesses shudder.

It's noon. Here is a messy gaggle of already fairly sloshed females in matching "sexy nurse" costumes, passing a giant, 2-liter plastic Sprite bottle filled with nasty-looking pink liquid back and forth; each girl visibly cringes as she forces down another chug of the hateful liquid, as if she was saying to herself, "C'mon, Steph. You have to get wasted. You have to choke this crap down. This is what real partiers do. Blackout or bust!" They looked miserable. Good job, girls.

It's 4:00. Another friend walks out of her apartment and suddenly feels as though a national tragedy must have struck; the streets had that bombed-out feeling, dirty and apocalyptic, and she passes by at least a half dozen young people in various degrees of collapse along the sidewalk -- weeping, moaning, heads between knees, garbling drunkenly into their cellphones, everyone half-lidded and fantastically lost. Fun! Except not even.

Let's not be naïve. Of course this isn't true for everyone who participated. Of course rabid public drunkenness happens at every city-wide party, street fest, music event you can name. Of course entitled twentysomethings have been getting painfully drunk in the streets since the end of Prohibition.

But B2B has a special tang. And because it traverses...