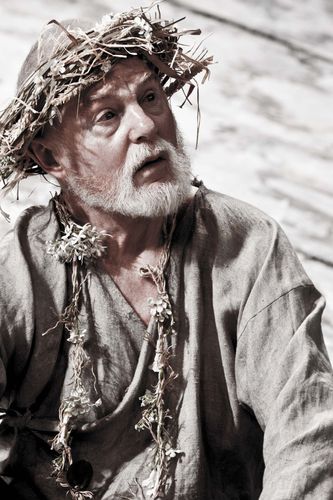 Derek Jacobi as King Lear at the Brooklyn Academy of Music. Photo by Johan Persson

I'll never forget opening my Manhattan apartment window at 3 a.m. and sticking my hand into the front edge of Hurricane Irene. Her center was two hours away, but the ferocity that scissoring wind foretold was sharper than anything I'd felt before. In the end, she didn't meet her promise on this island, luckily, but the memory helps me describe Derek Jacobi's performance of King Lear, last Spring, at the Brooklyn Academy of Music.

Hurricane Jacobi-Lear, storm of mind and soul, left a wide trail. Actor friends in my neighborhood still light up when talking of it. Everyone seems to have been seized by the window Jacobi opened on Lear's horrible lunacy, his gyrating out of control from the start.

I'd never seen the play so fully turned on a bias toward how one error reverberates into every cell of a dominant man's universe. It was like seeing the play for the first time. But I also felt memories of the day a wonderful English teacher named Howard Hintze loaded me and several other students into a station wagon in 1972 and drove us to the Stratford (Ontario) Shakespeare Festival. There, I first saw Lear rage at the storm of his own making. The actor was the renowned Canadian William Hutt, who made Lear a wide-open wound of accessible suffering. Later, in a 2007 obituary, I read of Hutt's recollection of a specific performance that may have been the one I saw: "The audience was filled with high-schoolers, and they were restless."

I remember sitting still, and I've had sitting inside me a conviction I'd never re-experience Shakespeare's world-exploding impact like that again. But I felt a similar, Shakespeare-rediscovering thrill twice in the past few months. The second time came from a writer named John Reed, whose "novel" -- All the World's a Grave -- stayed unread on my shelf for too long.

In a Shakespeare mood, the night after Jacobi's Lear, I reached for it. 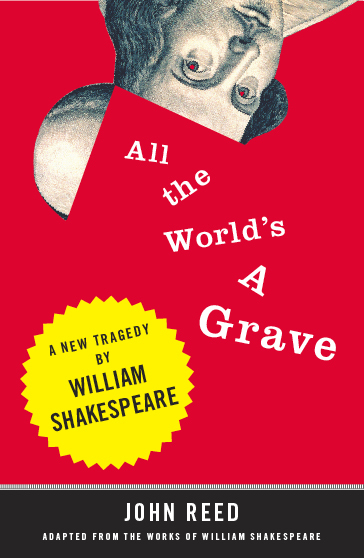 Cover of All the World's a Grave, by John Reed.

Reed's performance (classical post-Modernism, I guess you could call it) turned out to be a fabulously imaginative reinvention of existing Shakespearean plays into a completely new one, like a chemistry experiment re-linking polymers into new fabric. "A New Play by William Shakespeare," the cover announces, though the fine print says: "Adapted from the works of William Shakespeare."

Reed, a proven Thomas Edison type among fiction writers (Tales of Woe, an anti-sentimental stories-plus-graphics collection about awful things that happen to people, was his latest light bulb) turns five tragedies (in play form, with stage directions) into a convincing new five-act tragedy. The woven layers sometimes feel as rich and subtle as a three-dimensional Swiss lace, but it all becomes wonderfully clear, sophisticated fun.

Hamlet has gone to war to win Juliet as his bride, but returns home to find that his mother (a meld of queens from two or three plays, a complex woman in her own right) has murdered his father and wed Macbeth. Reed seems on the edge of too smart. He's going to spoil it, isn't he? Then, diabolical Iago tempts Hamlet with a handkerchief.

We recognize Shakespeare's language, whole speeches sometimes, which keep us feeling sort of stable as Reed mixes, matches, subtracts, elides and even reanimates discreetly in places with his own writing.

Why he says it, I won't reveal. It was one of many times I laughed before returning to the wonder and the dread, the poetic inevitability of fate that is basic Shakespeare and becomes Reed.

Interestingly, if one figure stays a bit cloudy, inadequately pushed to an unfamiliar-familiar clarity, it's Lear, Juliet's father and Hamlet's nemesis. He, of all Shakespeare's characters, may be the hardest to transform. My theory is that the play's worlds-within-worlds of emotion and event end up with such a precise feeling of Learness that, more than Shakespeare's other elemental characters, losing any part of him means a loss of all. At least, I think that's why this Lear feels less convincing than, say, Reed's brilliant Hamlet, whose father-avenging fury and Iago-teased jealousy pile up to make the prince super nuts.

There are lots of such discussions to have with oneself about this book, and Reed's essay at the end offers a guide to how and why he did this. His explaining feels sincere. It's a lucid bonus. But his sheer nerve -- and I'd say it's the aerodynamic force that makes All the World's a Grave fly -- can't really be explained. But it feels as close as writing can come to acting, and makes you wonder what a fully staged performance (or film) of Reed's book would look like. Derek Jacobi may still be resting up from his category four performance, but maybe others could try.

All the World's a Grave includes a concluding essay that claims Reed's unintimidated right to reposition sentences by an Elizabethan as a vow to stay true to his calling as a contemporary reader-writer. He remakes Shakespeare as a first-time author, his debut "a challenge" to "doubters as to the great literature published today."

It's a challenge to embrace authorship as a metaphor for all passionate acts that take the world you're given and remake it as your own.