All These Voices a short film both beautiful and harrowing premieres later this month on April 25 at the Newport Beach Film Festival and proves yet again that the Holocaust will always provide a never-ending supply of singular and provocative stories to be told.

Filmmaker David Henry Gerson spent time with the renowned artist Samuel Bak, a survivor of the Vilna Ghetto whose artistic sensibility, a mixture of haunting realism and surrealist memories informs the film.

The story takes place In the days following the end of World War II, when a young SS officer hides in an abandoned Polish theater. A theater troupe of survivors enters to celebrate the end of the war. As the soldier witnesses the expression of their painful past, he is forced to come to terms with his complicity in their grief.

The avant garde gives voice to the unspeakable. 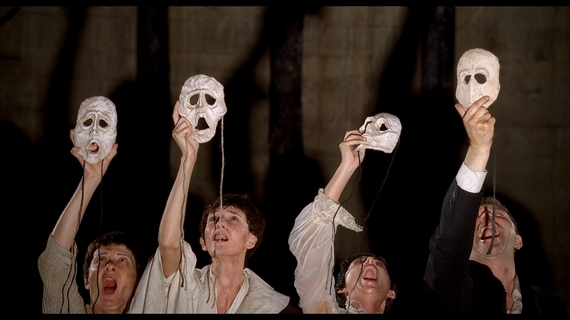 Nancy Doyle Palmer: Talk about your own journey that brought you to this story?

David Henry Gerson: As third generation of a family of Holocaust survivors, I was told my grandmother's stories of surviving the Holocaust - but her stories were filtered to be suitable to my young ears, my young imagination. There were details - of selling a wedding ring for a glass of milk, of getting a piece of bread by a creek from a kind soldier in Siberia - but she omitted the bulk of her traumatic experiences. I saw the pain in her eyes, but her stories quickly grew in my imagination into the epic, the mythical, the fantastic. Somehow, her stories became like wild-west cowboy movie adventures in my mind. That strange, somewhat surreal space between the reality of what happened there and how I imagine those stories passed down generation to generation is troubling to me. Especially as now my grandmother has passed away and every last survivor of my family from that war, as of a month ago, has now passed away, it has become my responsibility to never forget these memories - and how to do that is a challenge that led me to make this film.

I started working on this project almost 10 years ago while at Columbia University, then at the American Film Institute I wanted to re-enter this world I had started imagining years ago. I travelled to Eastern Europe with one of my co-writers, a very talented Slovenian-born screenwriter named Martin Horvat. Martin and I drove from Ljubljana to Auschwitz, and across Poland to my grandparents' hometown of Zamosc, Poland. Along the way we met with experts on theater and music and art to research who were the people in Poland, immediately following the war, that first started commenting with their art on what had happened. My specific chapter of a short film was based in our explorations of what might an avant-garde theater company in Poland's, like Tadeusz Kantor's (which was composed partially of survivors of Auschwitz), first performance after the war be like?

NDP: Art is not only a theme but easily the center of this film - you quote philosopher Theodor Adorno who said "there can be no art after Auschwitz" yet this is exactly what you have done?

DHG: A statement like that is interesting, but clearly false. Humans built Auschwitz. Humans continue to populate this Earth after Auschwitz. Humans continue to try to comprehend and exorcize the pain of Auschwitz. Art is to be a connective tissue amongst humanity, a means to reflect on our collective identity, actions, self, and ideally to grow together, to better understand ourselves. As long as humans exist, there must be art, and as long as humans commit atrocities, there especially must be art to reflect upon our inner demons as a human race.

NDP: Why make a Nazi the main character - perhaps an unusual choice for a young American Jew?

DHG: My father's parents created a monument to those who died in their town, in New Jersey, where they are now buried. On that monument it reads "We will Never Forget, and Never Forgive." The stone goes on to list more of the brutality and atrocities committed.

Forgiveness is tricky, it's something I often wonder about. Can I forgive Germany? But I know so many Germans today - were they responsible? Three generations later? No. I mean, I am half German. So am I half responsible? The point of "Never Forget", of telling and retelling the story of the Holocaust, just as we retell the story of the Jews' Exodus from Egypt every Passover, is to keep us from repeating it, but is also to keep any aspect of ourselves from committing crimes against humanity.

Why a Nazi character? Because he has the most to learn from hearing this story, otherwise, forgive me, but it might just be preaching to the choir. Moreso, I chose to make the main character a Nazi because this was not a problem of just Germany. I look at what we, as mankind did in World War Two not as a national or regional dilemma, but as a human problem. So in a sense then we were all Nazis, we are all in some small part Nazis, and until we face the Nazi hidden within ourselves my great fear is that we let that Nazi live on in hiding, waiting to rear its horrific head again in the future. But if we force that part of ourselves to see itself, then perhaps we might begin to grow as a species.

Plus, it just makes a better movie to watch a Nazi's nightmare than to watch a Jewish existential nightmare -- Woody Allen does that far better than I ever could.