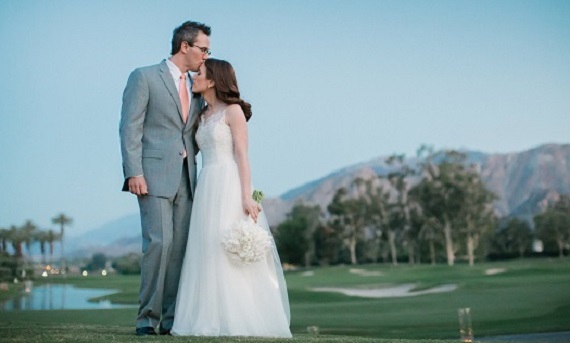 Which band do we want? What color should the groomsmen wear? Can our rehearsal dinner video montage be made to resemble A-Ha's "Take on Me"? For my fiancée, Emily, and me, the planning process for our wedding was routine.

Until 32 days before "I do," when a new entry was Sharpie'd onto our to-do list:

These stories all start the same. April 7, 2015 dawned like any other Tuesday. Emily was at the ophthalmologist because she'd been experiencing blurriness, which turned out to be caused by, surprisingly, inadequate blinking. Toward the end of her exam, her doctor said three words you never want to hear consecutively: What is that?

Driving to meet her, I realized that moments before, my biggest worry was finding time to watch that weekend's Masters.

The next six hours were spent in the dark. Sitting in a dim room to accommodate dilated eyes, we waited and wondered, unsure of what was coming next. Every so often they'd grab Emily for another test, but that only heightened tensions. Something was wrong, we just didn't know what.

Finally, an audience with the doctor. Though the conversation's details never registered, words like "malignant" and "melanoma" did lodge in my temporal lobe. Our "In sickness..." vow would be tested before we ever made it.

Uveal melanoma is a rare cancer of the eye. There are roughly 1,200 to 1,800 cases per year in the U.S., mainly affecting patients who are Caucasian; with light-colored eyes; and in their 60s or older. Emily matches just one criterion, but as I like to tease her, her pale complexion makes her really Caucasian.

What was the best of times was now shrouded in confusion. But after multiple discussions and a second opinion, clarity emerged. Yes, the first doctor was the right doctor. No, there shouldn't be long-term fallout. Yes, treatment could wait until after the wedding.

And with that, we celebrated. Emily and I made it down the aisle without tripping and through our vows without sobbing. We laughed, we danced, we ate cake.

Outside of a select few, we didn't tell anyone about the diagnosis. What was the point? It would've hung over the weekend like a cloud. If every guest mentioned it just once, that'd still be 150 conversations we'd have to endure.

I didn't want to think about cancer, and mercifully, I didn't. Maybe it was compartmentalization, or maybe it was knowing there was a plan, and doing anything beyond that was a dance with what-if.

The future was unknown, but I was happy I'd be confronting it as Emily's husband.

Treatment consisted of two surgeries. In the first, a radiation-dispensing plaque was placed inside Emily's eye. (Don't ask... I didn't.) A week later, it was removed. During those seven days, she was radioactive. Literally. Beyond administering basic care, nobody was allowed within arm's length of her.

I'd been a spouse less than a month, meaning I'd never been a spouse with primary caregiver responsibilities. I had no clue what to do, no experience upon which to draw, and I was petrified of doing something blatantly off-base. Thankfully, Emily's parents were there and provided immeasurable support. But their presence also upped the ante. What if I did something to make them regret giving their daughter away to me?

Following the first surgery, I was so eager to prove myself that I walked up to Emily, kissed her forehead and started massaging her shoulders -- forgetting that she personified a nuclear warhead. With my body bathing in radiation, my mother-in-law gently reminded me of the requisite buffer, as my no-screw-up streak disintegrated on the recovery room floor.

There was plenty to be afraid of. There were the obvious fears of the cancer spreading, and the idiosyncratic ones, like how helping Emily to the restroom would forever alter our relationship.

But the fear that haunted me most was the fear of the big picture. Corny as it sounds, Emily and I are a team; everything we do falls under the umbrella of "together." For years, that's something I resisted, but that changed with my proposal. I wasn't just committing to Emily; I was committing to a different life, a life rooted in connection and partnership.

Yet before we started, cancer was threatening that plan. This new life was built for two, and if I didn't have Emily, how could I make it alone?

Thankfully, that's a question for another time. Both surgeries went flawlessly, and indicators show the treatment to be working. Every piece of news we've gotten has been positive -- aside from the initial diagnosis. And even that entailed an aspect of good fortune. Because she has 20/20 vision, Emily hadn't had her eyes examined in 20 years, and if it wasn't for an unrelated issue, she wouldn't have had them examined for 20 more. By then...

My brother, a rabbi, told me he hears stories like this every so often. A person sees the doctor for one thing, only to have a more serious condition discovered. On one hand, these stories lend comfort, evoking images of guardian angels. On the other, though, they inspire fear of what could be lurking in the shadows.

How are we to reconcile this?

I have no idea. But based on this experience, whether it's weddings or well-being, it's clear there's so much that's out of our control. We can stay prepared, and we can do what's right, but that's the extent of it. Best laid plans only take us so far. Whatever's around the next corner is around the next corner, and until we encounter it, what choice do we have but to laugh, dance and eat cake?