It is appropriate that journalist and memoirist Allegra Huston conducts regular writing workshops called "The Imaginative Storm." If the name Huston sounds familiar, yes, she is from THAT Huston family; half sister to actress Anjelica and daughter of director John Huston. We caught up with her in Savannah, Georgia at the Savannah Book Festival. Huston was at the helm of a writing workshop which provided pure immersion in the creative process--let the imagination flow, don't censor it, and you just might come up with something. Since 2004 Huston has teamed up with slam poet James Nave in developing a unique format to unleash the creative muse. Originally called the "Writing Salon," the concept flowed from work Nave was doing with Julia Cameron, best selling author of The Artist's Way. 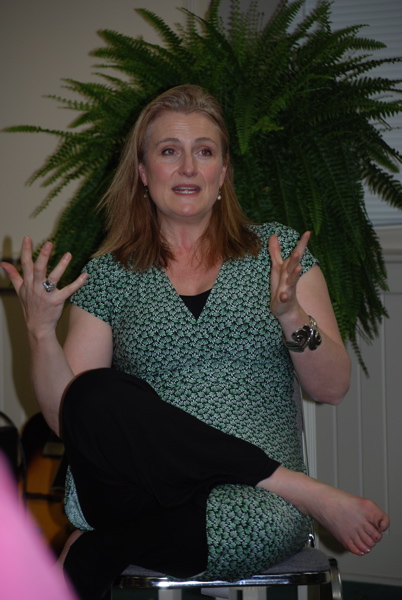 After six years, "The Imaginative Storm" has morphed into an improvisational party populated with words--a chaotic captivation designed to stimulate the writer's imagination. Writers really have no chance for a passive absorption of technique if they brave Huston and Nave's workshop. Hide in the back row and you will be called upon to read, to write five sentences, to do something. I know. I tried to lay low and did not get away with it. The mantra of the process is to "look for energy and not perfection." 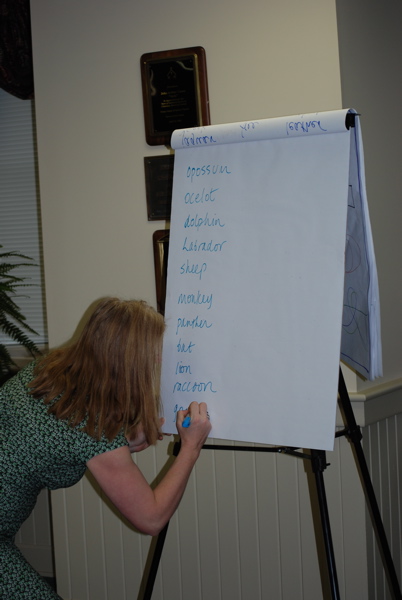 Something happened to Huston along the way as she was teaching the workshops with Nave. For one thing, she wrote an acclaimed memoir, Love Child (2009 Simon & Schuster). Film and cultural critic Caryn James did the review for the Huffington Post.

Huston now calls herself "the poster child" for the imaginative storm technique. Love Child explores Huston's early life, which was tragic by any measurement of childhood. Her mother, ballerina Ricki Soma, died in a car accident when Huston was 4 years old. The identity of Huston's biological father was a mystery, but Tony and Anjelica Huston were her half siblings and director John Huston, Soma's estranged husband, eventually raised Allegra.

"Some of my favorite passages in the book are almost word-for-word what the "Imaginative Storm" threw my way," Huston says.

She did not want to write a "poor me"' account of the loss of her mother and resulting search for her birth father. The story "had to have a happy ending" or she would not have written it, Huston says. As a result, for years she resisted requests to write a memoir. There is apparently no room for narcissism in Huston's lexicon. The truly creative mind takes experience and fashions it into possibility. A lazy mind resorts to whining and moaning about life, ignoring potential. In 2009 Huston went back and revisited early memories with Irish Television as part of an RTE documentary. Life has not passed her by--nor has she been a passive observer. She is not hiding in the back row.

But here is where it really gets interesting. Huston put that unfettered imagination and desire for happy endings to work and came up with a hurricane of an idea. The result is a script for a short film based on the urban legend that Neil Armstrong said more than "One small step for man, one giant leap for mankind," when he walked on the moon. After all, he was up there for four hours. He probably said a lot of other things.

One of the things Armstrong allegedly said was "Good luck Mr. Gorski." Or did he? If he did, who in the heck was Mr. Gorski? This was the height of the cold war. Did the United States accidentally send a Russian spy to the moon? The legend has played out over the Internet in the "fact" that 25 years after his moonwalk, Armstrong told a reporter in Florida that Mr. Gorski was his next-door neighbor when he was a boy. One night, he sneaked into the Gorski's back yard to get his baseball. What he overheard through the open bedroom window was a very upset Mrs. Gorski saying, "You want oral sex? You'll get oral sex the day the kid next door walks on the moon!"

Of course Armstrong would remember the incident. It may have scarred him for life. Or did it?

Well, that is the way Huston is pitching a short film that tells the whole truth and nothing but the truth--or does it? What flows from the imagination can be more compelling than memoir, and therein lays the message of the creative storm technique. Don't censor; let thoughts flow and be amazed with what lies beneath the surface of an idea, a word, or a phrase.

"Some of the truest stories are fictional," Huston says. "Don't you wonder what happened in the Gorskis' house the day the kid next door walked on the moon?"

Huston was determined to find out--and tell us.

Here is Huston's account of the set up and the pitch for Good Luck, Mr. Gorski.

The Gorskis' marriage started freezing to death that night, long ago. They sleep in separate bedrooms now. They communicate in set routines. They care for each other out of duty and habit. They're living a dead life.

Mr. Gorski has forgotten that night, but Mrs. Gorski hasn't--it's seared on her memory. She takes it personally that the kid next door is the first man to walk on the moon. She's tormented by the thought of what she said so casually, because she has always prided herself that she is a woman of her word.

And then, they hear Neil Armstrong say the words, "Good luck, Mr. Gorski." Mr Gorski doesn't think for a second he could mean them - but Mrs. Gorski knows he does, and the shame of that long-ago night floods back.

And find their love for each other again.

But will the film industry love the Gorskis?

The world of the artist, whether it be in music, writing, or in this case, film, is certainly fraught with frustration. The independent artist, especially, is forced to be creative in the business world as well as the artistic arena. Huston wrote Good Luck Mr. Gorski, twelve years ago and has come close to being financed three times. Short films, like Indie Music, don't make money. They are popular for a niche audience at festivals, but private funding sometimes is the only way to breathe life into the project. So, Huston brainstormed with six girlfriends at a dinner one night and came up with a plan. Facebook and social networking provided the launch platform.

After being turned down by the New Mexico state film office program for a $20,000 funding request, I came up with this idea: 1,000 people at $20 each. That night I was having dinner with six girlfriends and I tried the idea out on them, and they encouraged me to go for it. They're now on my webpage as "Mission Control, Taos". That was December 14. I opened a dedicated bank account the following day, got a webpage up a few days later, and launched the Facebook group on the 19th. Weird timing, right before the holidays, but that's just how it worked out.

These are tough financial times and expendable income is at a premium for most people, but for $20, Huston thinks of it as "the cost of lunch." Anyone who is not expecting anything back except the satisfaction of supporting a project in the smallest of ways, can help Huston's personal imaginative storm make landfall.


When Obama was raising money, I never felt I could afford to give him $50 or $100, but I gave $25 again and again and again. That's why I pitched this at $20 - it's the cost of lunch, it's the kind of money you can spend on amusement and not expect to get something back. Some people have contributed more - and not just family! People are really enjoying being a part of this, and the wonderful thing about it is how many people I've never met are contributing to the project, and trusting that I'm for real.

Huston is hoping to begin filming in late summer 2010. Challenges are many. The production team needs to create a house from 1969, flashback to the 1940s, and simulate Mission Control. Huston says she is willing to settle for a corridor in the building.

Huston cannot afford to make this movie on her own, and is not afraid or embarrassed to say so.

Many people assume that because I'm a Huston I must be rich. My standard response is that Dad did make a lot of money, but he spent it too, and I'm glad he did. If I was rich, I would have made the film by now! Basically, I've given up waiting for an angel, or waiting for somebody else to finance it for me, so I'm attempting to do it myself, to find and inspire my own angels.

People can read the script

Mission Control listen up. Hurricane Allegra is heading your way this summer. She has her eye set on your building. Watch her trajectory on her Facebook page, Good Luck Mr. Gorski.