Like most Americans, I have been hurt by the tragedy in Boston. We all were touched by these horrific events.

I say that to show you what popped up on the corner of my Facebook feed this morning: 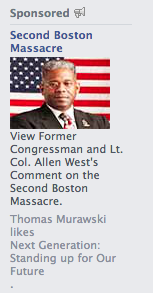 Former Florida Congressman and Tea Party leader, Allen West paid money to the social media giant to run a self-promoting ad campaign to get his heartfelt opinion of the tragedy out... naah, who are we kidding, it's to build an audience and make money!

People will argue that there is altruism here and he truly cares about what happened, and I'm sure he does, but capitalizing on a tragedy to build an audience for yourself is just plain wrong.

Remember when the GOP made such a big deal of President Obama's 'taking advantage' of Hurricane Sandy to 'look like a hero,' right before the election? Where would taking advantage of a terrorist attack to build an audience rank for them?

To be fair, this ad comes from the Next Generation: Standing Up for Our Future campaign which West is a part of... so the blame can probably be shifted around... which with enough bad press it will be.

Oh, did I mention that I'm a Republican? I'm disgusted by organizations like this who are willing to capitalize on tragedy to build a name and voice in the public. Every person who has clicked like to them on Facebook or donated to them should reconsider their actions.

If you want a next generation of Republican, someone who stands up for America's future, maybe you should start by not taking advantage of it's incredible loss.