I see that Representative Allen West (R-Fla.) has taken exception to President Barack Obama in an email to supporters, saying that the president "does not fathom" the concept of economic mobility. Here's how West puts it:

I truly believe President Barack Obama does not comprehend American exceptionalism. He does not fathom that in America the station of your birth does not determine the station of your outcome. America is not about class or caste, it is about rewarding individuals for their drive and determination, for their hard work and ideas.

I suspect this won't be the last time I have the occasion to say this about Allen West: "Whiff!"

As it turns out, the reality of upward social mobility is something that none other than 2012 also-ran Rick Santorum brought into the political discussion during this week's debate. There, Santorum said, "I just read a recent study that actually income mobility from the bottom two quintiles up into the -- up into the middle income is actually greater, the mobility in Europe than it is in America today." As Jonathan Chait rightly points out, Santorum brought this up "as an indictment of Obama" -- just as West does.

I've no idea if Santorum was referring to the Pew Charitable Trust's Economic Mobility Project, but Brad Plumer suspects that this may be the case. And, as it turns out, Pew has something very specific to say about the impact of hereditary luck on mobility: 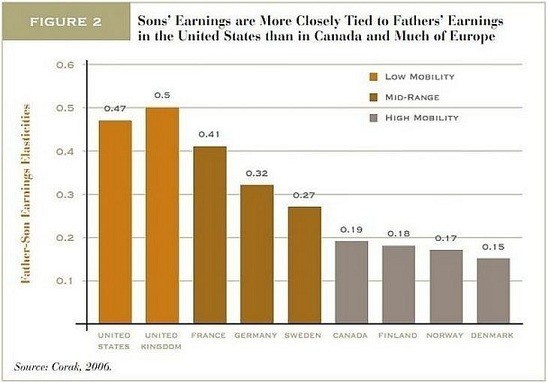 As Plumer points out: "The effect, as Santorum mentioned, is particularly pronounced at the bottom: '[M]en born into the poorest fifth of families in the United States in 1958 had a higher likelihood of ending up in the bottom fifth of the earnings distribution than did males similarly positioned in five Northern European countries -- 42 percent in the United States, compared to 25 to 30 percent in the other countries.'”

A 2010 report from the Organization for Economic Co-Operation and Development (OECD) makes the same observation. As HuffPost's own Dan Froomkin reported:

The report finds the U.S. ranking well below Denmark, Australia, Norway, Finland, Canada, Sweden, Germany and Spain in terms of how freely citizens move up or down the social ladder. Only in Italy and Great Britain is the intensity of the relationship between individual and parental earnings even greater.

It's pretty to think that these structural impediments could be surmounted just through the force of will and a healthy dose of Allen West's magical thinking, but as Henry Blodget pointed out yesterday, here in the real world, "social mobility [in America] is at an all-time low." How can this be alleviated? As Froomkin points out, one could fund early childhood education, maintain a dynamic "social mix" of diverse economic backgrounds among student bodies and promote "progressive tax systems and social programs" that "help reduce income inequalities." Unfortunately, I'm pretty sure that Allen West is not a member of the party that wants to do those things.

Nice try all the same, Allen.