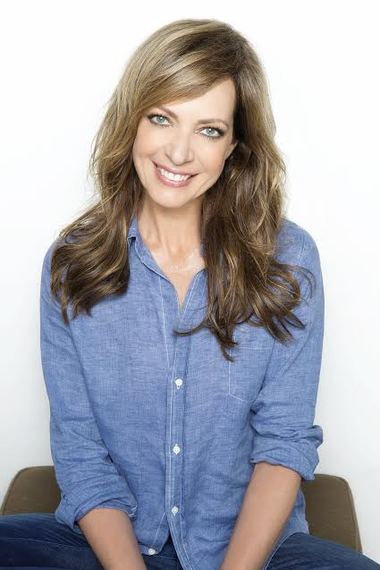 You know her best for playing C.J. Cregg, the press secretary on The West Wing, in addition to being in a slew of films not limited to, but including Drop Dead Gorgeous, The Help, and more recently The Way Way Back.

Allison Janney is an acting marvel who plays a wide range of roles and has an impeccable comedic timing.

You can now see that comedic timing on the new hit CBS sitcom Mom. Recently, Allison made our eyes fill with tears via her complex portrayal as the housewife of a closeted gay university provost in Masters of Sex on Showtime; the show will be returning for a second season this year.

Allison and I sat down and had a wildly fun conversation about her career, life, her love for her craft, and how truly ready she is for love.

Hi, Allison. Thanks for taking the time to converse with me today.

When I heard that you were going to be on TV again, I was elated.

I was excited too. I had been looking for a vehicle like this for quite some time. After The West Wing, which is one of my favorite things I've ever done, I lost quite a bit of my personal life doing that show because the hours were so demanding. I had always heard that a multi-camera scenario is a great way to be an actress and have a personal life.

A single-camera show can be really time-consuming. It's almost like shooting a movie every week. So, how do you like it so far? It seems like you're having a blast.

I just love the whole process from start to finish, from the first read on into rehearsals. The playground in this type of show needs you to be so fast, think on your feet, and you get to rehearse. I love to rehearse; you don't really get the chance to do that when doing TV or film. You get to make suggestions -- it's so fun, creative, and rewarding.

So, would you say it's a lot like theater acting?

Yes, it is. I came from the theater -- we get to shoot in front of a live audience on Fridays, it's great. I love shooting in front of an audience, it's very comfortable for me. I feel very grateful for this job. I'm glad that they ordered the back nine and I hope that they'll give us another season.

The show is getting a pretty good reception from the audiences and that's what's important. I think the show is fantastic; you and the cast are doing a phenomenal job.

Thank you, Bryan, that's sweet of you to say. I just try not to get ahead of myself with these kinds of things. I just try to do what's inside me and leave those worries to the powers that be.

I will concede that it is kind of scary how quickly television can change. One second you can be a hit, and then the next second you're on the bubble.

I know, it's terrifying. Like I said, I just try not to worry about it. Back when we were doing The West Wing, this little show called The Bachelor started -- it was the advent of reality TV and it killed us. It pissed me off; I couldn't understand why people want to watch these stupid reality shows, which I still hate.

It was when the writers' strike happened that these shows started to come out. It's this huge profitable engine for this extremely small group of people. Meanwhile, the brains of reality TV viewers are being skillet-fried.

Right, and I think that's what's taking away from actors, directors, and writers. I have friends who work in reality TV and they know how I feel about it. It's like rubbernecking during a train wreck.

(Laughs) It's like that bad carton of milk in the fridge -- you know it's bad, but you have to smell it anyway before you throw it out.

I don't know. Maybe it's that thought that things are funny if they happen to other people.

Oh, happy belated birthday! I almost forgot. Did you get to do anything fun to celebrate?

Thank you! A friend of mine that lives on my street has the same birthday as I do. I just didn't feel like dealing with mine this year, so she threw a party and I went to her birthday party instead. I usually do a big thing like go to Vegas or make everyone wear wigs and go to a dance club -- I usually do something outrageous, but this year I wasn't feeling it. I had a nice lunch with Anna Farris and there were a lot of people around who knew it was my birthday and sent over desserts.

I'm glad you had a good time; you deserve it. I just want to get on another show that I am in love with -- Masters of Sex; it's an incredible show.

I'm so f****** lucky to be part of that show. They hadn't even written the episodes yet when Michelle Ashford called me and asked me if I wanted to come on board and play this character. She told me that there might be some nudity and some sex scenes. I was like, "you do know how old I am, right?" Okay, so we'll work around that. Of course, I want to be brave and fortunately, I gave up pasta six months prior. I had stopped eating it for a while so that I could see what that would do to my body.

(Laughs) That's really hard to give up.

(Laughs) So, I lost a dramatic amount of weight, started working out, and decided that at this moment I don't feel particularly awful about my body. So, I said if I was going to do it, then now is the time. I was brave and decided to do it.

You have to be brave to do that.

Then, I started to get the scripts and was blown away -- I didn't know what was going to happen from one moment to the next. It was such rich material. I love the character because she's so strong in the face of this terrible tragedy, she refuses to be the victim and she keeps trying to make it work. I also love the vulnerability - especially with the moment where the Teddy Sears character is about to break up with her, she lets him off the hook to save face at this extreme humiliating moment. It's incredibly emotional and complex.

This is the kind of stuff I was trained to do, just like in the theater -- going from Noel Coward to Arthur Miller. It's an actor's dream to be able to [do] two totally different characters at the same time.

I remember Cynthia Nixon was doing two different plays on Broadway at the same time. I just remember how cool and how remarkable it was -- I feel like I'm doing that same thing on television.

I can imagine how much like theatre that would be. Especially on Mom, where I would imagine that you are doing quite a bit of improv.

Every once in a while, I might throw something in. I think with my physicality I'm able to do a little improv.

I could see how that would come into it with your height. See, Allison, I am one of those guys that has a thing for tall women.

Really? How tall are you, Bryan?

I love that you love tall women. All of the guys that I've dated have been shorter than me.

Do you look for guys that are taller than you?

No, I can't say that I have looked specifically for a particular height -- I gotta say, Bryan, at this point, it's whoever knocks at my door.

(Laughs) You're stunning, Allison. There is no reason that I should be hearing you say whoever knocks on your door.

Do you get out and about and meet people?

That's the thing, Bryan -- I don't like to go out. I'm not really a Hollywood party kind of person. I hate parties; I like to have people over to my house for small dinners and game nights or a movie.

I'm the same way -- get me in a game of Monopoly or Taboo and I can go all night.

I know I'm not going to meet that person sitting in my house, so I have to get out of my comfort zone and get out and meet people.

You're this big star, and you're highly visible so it's not like you can get out there and start online dating. Can you imagine what would happen if you did that? 'C.J. is looking for love online!' That's what they would say and they won't even call you Allison.

I know. I would be this novelty date for everyone. I don't know, I might have to go to a professional matchmaker.

Well, what am I going to do, Bryan?

I've always wondered that though -- how do you date in Hollywood? That has to be a challenging thing.

I don't know at this point in my life. I've had many long-term relationships, but I've never been married. I'm wondering how I'm going to make that part of my life work.

I don't necessarily have to have someone in the business, it might be better if I had someone who isn't. I'm open to any profession as long as they understand and have an appreciation for what I do. I wouldn't be able to imagine being with someone who didn't get what I do -- that wouldn't be so great.

If it was someone in showbiz, who would it be? Who would be top five showbiz guys that would just make you say 'that's the guy?'

There are a few men that I've worked with that I would have considered, but they're married so since it wouldn't happen I'm not going to say their names. I wouldn't want their wives to come after me.

There isn't anybody? Not even one, maybe?

No, they're all married -- it's so frustrating. The ones that aren't married are either gay, or they are not age appropriate.

Wait a minute -- back up a second! Age appropriate? You can transform into cougar mode and snatch that up, right? (Laughs)

Don't you worry about me, Bryan -- I've been in cougar mode before. That's not real, I can't do that. I couldn't do it. I'm too insecure for that.

How is that different from there being a height difference though?

I would be way more comfortable dating a 5-feet tall guy than I would be dating a 23-year-old guy.

Wouldn't you have to lift him up to kiss him though?

Everything evens out when you lie down. (Laughs)

(Laughs) That is very true.

Be sure to check out "Mom" on CBS, Mondays at 9:30/8:30c and watch for the season two premiere of "Masters of Sex" on Showtime.