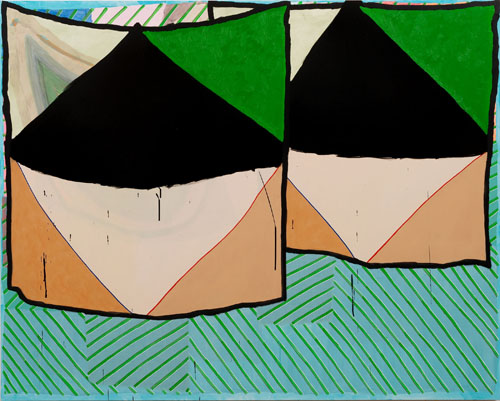 Allison Miller lives and works in Los Angeles. She received her BFA from the Rhode Island School of Design and her MFA from the University of California, Los Angeles. She has had solo exhibitions at Susan Inglett, New York and ACME., Los Angeles. Group exhibitions include the forthcoming "Made in L.A. 2012," Hammer Museum, Los Angeles; the forthcoming "Stone Gravy," curated by David Pagel, Ameringer/McEnery/Yohe, New York; "California Abstract Painting - 1952-2011," curated by James Hayward, Woodbury University, Los Angeles, New Art for a New Century, Orange County Museum of Art, Newport Beach; "Meet Me Inside," Gagosian Gallery, Los Angeles; "Tables and Chairs," D'Amelio Terras, New York; "Something About Mary," Orange County Museum of Art; and "LA Now," at the Las Vegas Museum of Art. Miller's work has been reviewed in Flash Art, Artforum, Frieze, Modern Painters and the Los Angeles Times. Her work was also included in Painting Abstraction: New Elements In Abstract Painting by Bob Nickas, published by Phaidon Press.

Why do you use these particular materials?

I've never felt any particular attachment to or romance about the materials I use. I think about pushing them to achieve different effects -- mimic different behaviors -- in order to build the paintings, but beyond that I don't obsess over the materials themselves. Most of the paintings I've made have been a combination of oil and acrylic paint, sometimes pencil, and more recently, dirt. I was struck by the absurdity that the addition of dirt mixed into the paint lent to late Braque paintings. My use of dirt is more selective but still absurd, in my mind, usually pushing the tangibility and weight of a certain area or form within a painting, or mimicking concrete or rock. This is a ham-fisted and direct way of achieving a kind of realness within a painting which sits in contrast to a line or form made of, say pencil, which is so self-consciously affect-less that it can ground a painting in its materiality -- sometimes counter-acting what the dirt has done. The same is true of the differences in the opacity and thickness of the paint layers; they can keep the boundaries and space within a painting in flux. I want these kinds of contentious relationships in the paintings.

Name an artist you'd like to be compared to.

Hmm, I don't think there's one specific artist that I'd like to be compared to, but I can think of a long list of names of people whose work I would love to be in conversation with -- a few that come to mind are Milton Avery, William Baziotes, Florine Stettheimer, Giorgio de Chirico, Chris Martin, Alex Hubbard and Garry Shandling.

What can't you live without?

Always I would say a lot of time spent painting, and at this moment I would add Griffith Park, a long list of movies and loud, droning but epic music.

What jobs have you done other than being an artist?

In the last few years I've taught painting at a few different universities and, while I'm relatively new to it, teaching has already affected my life and work. Watching students making paintings, often for the first time, constantly makes me reevaluate what a painting can do. I also learn from the decisions students make -- every student in every class has, at least once, blown me away with a decision she or he has made in a painting.

Before teaching, I worked for a painting conservator for about six years. Doing conservation meant that every day I was relating to paintings that normally I would have only seen in books or museums as objects to be fixed, plain and simple. Sometimes it felt like seeing a Hollywood starlet first thing in the morning -- no makeup or gold frame, no air-brushed publicity photos or art historical pedestals. It was also surprising what would happen after spending months in a room with them. A white, egg-shaped Fontana, for example, ended up blowing away a whole room of larger, more aggressive, heavy-hitter paintings. Those experiences, like teaching, changed how I relate to paintings in general and to my own work.

Before these jobs, let's see, I was fired from a pharmacy for talking too much, I worked in a flower shop for a woman that had been struck by lightning twice; I was a landscaper and garbage collector at my undergraduate college; I worked in a clothing store; I catered in a tuxedo; I was a prep-cook in a restaurant; and I waited tables, of course.

What forms first in your mind, a concept or a skill you want to explore?

I heard Laura Owens say in a recent lecture that she thinks that there are artists that have a hard time getting started on a piece and artists that have a hard time finishing a piece. I am absolutely in the latter category. When I start a painting there are no parameters, except perhaps the dimensions of the canvas itself, and I have nothing to lose. It feels like the energy at the beginning of a painting is looser and more frenetic and it gets calmer and slower as the painting gets built, until I think I've finished it, but I'm usually wrong. Nowadays, I seem to finish paintings two or three times over the course of a few months, slowly making more and more extreme "final" decisions as I go.

Does where you live influence your work?

The light, space, flora and ridiculousness of Los Angeles definitely put the zap on my head when I moved out here over a decade ago, and I would say the zap is still on. Having said that, I want to add that while everyone's environment effects what she or he produces to some extent, the idea of work being "Californian" in nature is ridiculous. I'm not entirely sure what is meant when people say that, but we are not just mellow optimists out here, and we are not simply responding to the weather.

Is there any kind of media that affects the way you approach your work (i.e. film, TV, radio, social networking, print)?

Collectively, movies were the big brother or sister I never had. Every cliché you can think of about a child growing up through film is true for me, the difference being that I never wanted to make them -- I wanted them to be reality.

In a strange way I think I approach my work now, even though it is always a static, two-dimensional object, with the same hopes and expectations that I have of a film. I'm constantly aware of things being "on camera" and "off camera" and of the idea of protagonists and narratives being concealed or shifted in relevance and priority. The humor in and perversity of applying these expectations to abstraction is a big part of my work.

There is also a similarity between how I want a viewer to circulate within and through a painting and the headspace I enter when I'm watching or listening to a film (I listen to films in studio quite a bit), especially if I've seen it before and know the plot, which means that I have the luxury of entering the film experientially, outside of the narrative.

What's the most important career break you ever got?

I'd been out of grad school for a few years and a fellow painter, Bart Exposito, came to my living room-studio to see what I'd been working on. That day he made the generous offer to clear the walls of his own beautiful studio in order to put my new work up for a Sunday afternoon viewing. Another friend, the artist Katie Grinnan, came to that "show" and sent ACME Gallery an email about my work. I had my first solo show there a few months later. I bought Bart and Katie champagne.

What are the fundamental beliefs that drive the way you work?

I think I'm a pragmatic person trying to carve out a grey area that is just as concrete as daily life (however concrete that is) and can be seen, proven, by the paintings I make.

The way I've figured to go about doing this through objects is to always try to surprise myself, decision by decision, as I build each painting with the hope that the viewing experience mimics this process, meaning that I hope that the painting unfolds, collapses, comes back together and unfolds again in a different way as the viewer navigates through it. I like making objects that seem to fail to achieve one goal and inadvertently succeed in achieving another, unanticipated goal.

I use the term "build" when I talk and think about making the paintings because that's the best way of describing how it feels to make them. Things are tacked-on, pushed back, covered-up and layered as if I were building an object. I picture some elements sitting in real space where gravity and physical properties come to bear on them or, conversely, where those properties are defied. This is true to the point that I consider a lot of the paintings to be portraits of sculptures, since, if they were to sit in real space, I don't know what else they would be.

What comes first in your work, pleasure or pain?

There is a kind of mild masochism that exists in my work in a sense because I want to stay uncomfortable with each painting until it's finished, that's how I stay in conversation with it. But really, there is no pain involved in my practice.

This reminds me of a joke:

Not Dead Yet: 10 Questions for Allison Miller