Allison Schulnik's artworks depict a cast of mangled outsiders that exist somewhere between the circus and the cemetery. If the sugary story lines of bedtime tales morphed into twisted nightmares overnight, we imagine the result would resemble Schulnik's visceral concoctions.

Through paintings, sculptures and animated films, Schulnik creates alternate worlds where skeletons appear to be built of frosting and worn flesh drips off the bone like overcooked meat. Hobos, wizards and questionable clowns are as suspicious as they are pathetic. Yet the leading character in most of Schulnik's works is the material itself, paint layered on in so much excess it acquires a life of its own. Whether the gobs of paint brings Schulnik's subjects to life or devours them whole remains in question, yet it's nearly impossible to imagine Schulnik's hopeless creatures in any state besides this slow-moving goop.

For her first museum exhibition "ex•pose," Schulnik presents a selection of her most disarming works along with her three animated films "Hobo Clown" (2008), "Forest" (2009) and "Mound" (2011). In anticipation of the exhibition we reached out to Schulnik to learn more about her process and life outside her work. Scroll down for an image slideshow. 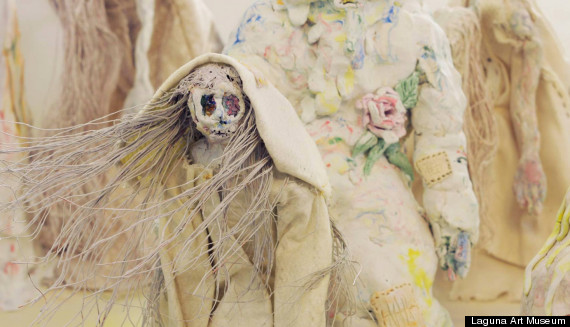 Huffington Post: How has growing up and working in California affected your work? Would you consider living somewhere else?

Allison Schulnik: I love California. I always wanted to move around more. I love traveling and exploring new places. I just never really found anywhere better to live. It's really the perfect place for me to work and be. Los Angeles in particular has the perfect blend of solitude, space and community and I love it here.

HP: Many of your characters recall rotting childhood figures, from clowns to mermaids to kittens. Were these repeated subjects present in your childhood imagination?

AS: Yes, probably like most children. I don't know if anything is rotting, but I guess there's some decomposition of some kind. Maybe a little festering sometimes, a little tarring and feathering other times. However, I am unashamedly sentimental and hope to be celebrating them at the same time. I try to provide hope and understanding for the characters I'm working with. Yes, I'm probably a little stunted in my development. I like fantasy and make-believe, but I guess because I am no longer a child, I've been told, some reality seeps in. Interview continues after the slideshow.

HP: What are you obsessing over outside of work?

AS: Gardening. I love planting stuff, but then I have trouble with the upkeep. I planted a big garden recently. Someone (you know who you are) told me it looked like a plant monster barfed everywhere. Okay, so it's a little frantic and overwhelming. Just a bunch of plants that don't really go well together I crammed in, not taking into account their contrasting watering needs and soil requirements. Now with the addition of a mountain of weeds from the rain, hundreds of mushrooms that grew out of nowhere, thousands of leaves from the big, now naked fig tree, it's a big obsessive heap of horticulture. They'll probably all just die. I tend to overdo it sometimes.

HP: You've mentioned your short attention span. What is your advice for artists who over-procrastinate?

AS: If you're not working enough, then work more. If you're working too much, then take a break. Surround yourself with inspiring people who care about you. Cycle between stuff. And realize sometimes procrastination is good and necessary.

Schulnik's "ex•pose" will show at the Laguna Art Museum until April 28. For past coverage of Schulnik's works see our reviews here and here.