Mark Moore Gallery describes Allison Schulnik's paintings as "distinctively textured," which may be the understatement of the year. Schulnik's painted outcasts are more stuff than substance, their insides oozing out and dripping all over like a melting ice cream cone. Yet even through the heavily slathered paint the dark psychology and pure(ish) hearts of her lovable losers shine through.

Her last exhibition gave dignity and depth to hobo clowns, and now Schulnik is setting her sights seaward. "Salty Air" draws upon the story of "The Little Mermaid," both the Disney version and the darker Hans Christian Anderson counterpart. (If you aren't familiar with the original fairy tale, Eric and Ariel do not end up wed happily ever after. Instead Ariel, heartbroken, throws herself into the sea and her body dissolves into foam.) 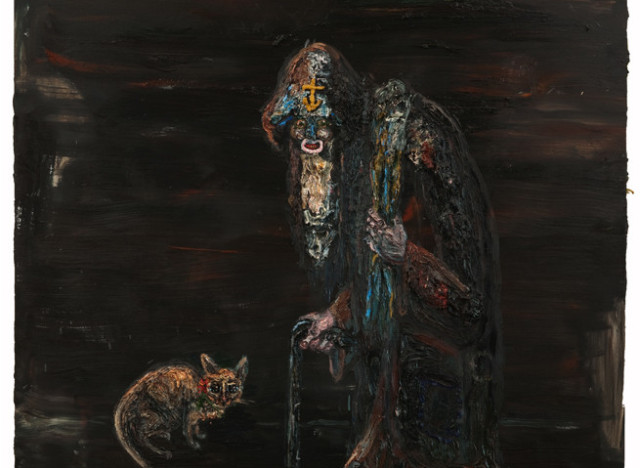 If the story wasn't already horrifying, Schulnik takes it there no problem. Sebastian, Disney's friendly French lobster, looks like a demonic ringleader in disguise, and if you don't recognize Flounder you may find him by his alternate title, "fish head." The captain and crew appear smothered in darkness and crawling with stray cats. Tattered jeans and skeletal toes are far less haggardly than their faces, eroding with neon wrinkles. These sailors don't look all that different from last year's hobo clowns, making us wonder if there really ever was a boat at all...

Yet most frightening of all may be Ariel herself, who is given legs by an evil queen in exchange for her tongue. Some of the paintings depict Ariel's nude human body, legs spread wide, against an ornamental backdrop. Yet her splayed-open genitals are a far more comforting, less shocking sight than her mutilated face, reminiscent of a screaming voodoo doll.

The crew of crusty scallywags and doomed heroines offer the perfect opportunity for Schulnik to do her thing, making the strange stranger. Yet in the end Ariel's narrative gets lost in Schulnik's gobs of pigment; rather than telling their tale it is as if the is keeping the characters hostage. More than creating her own style, Schulnik has created her own medium. And that is why she is one of the most promising artists to watch today.