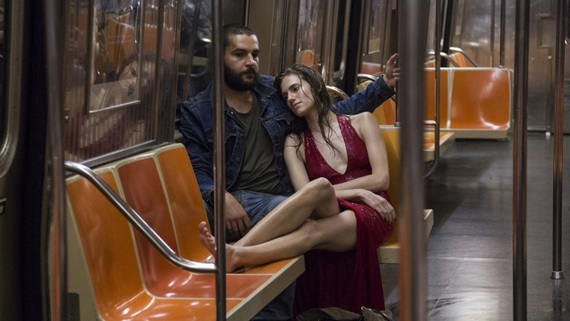 HBO television has been known to offer quality programming from its conception, raising the bar of television with cinema-worthy shows such as Oz and The Sopranos. If anyone thought Girls might not have belonged in their esteemed line-up, they were proven dead wrong this past season. Better than ever, Girls delivered both comedy and drama in spades with such gut-wrenching gravitas that it showed why audiences were drawn to it in the first place -- and no episode showcased that more than the sixth of the season, "Panic In Central Park." Loosely based on the Al Pacino film Panic In Needle Park, this stand alone episode takes on an in media res format and focuses on Allison Williams' often cringe-worthy and entitled character Marnie Michaels as she reunites for a night with her ex-boyfriend that abandoned her.

Girls' willingness to embrace the entitlement of millennials has always received its fair share of anger from audiences, particularly millennials themselves, and Williams' Marnie has received a large brunt of the criticism. Whereas the other characters tend to be more colorful and self-deprecating, Marnie's desperation to be perfect is only that much more infuriating in her entitlement. She is beautiful, skinny, and comes from money- and since she is usually the most grounded, most uptight, least colorfully zany and most relatable, millennial audiences have a very hard time watching Marnie show their truths and make their mistakes- and Williams does it so perfectly that it makes it that much harder.

Another common complaint of the show that only adds to the frustration of the notion of privilege is the idea that all the actresses come from famous, or well-connected parents (Williams is the daughter of NBC news anchor, Brian Williams) and their success is based on pure nepotism. Fans often don't realize that the willingness to parade the worst traits of the Y generation is extraordinarily brave, and it downright enrages them to think that four millennial girls just wanted a hit show to celebrate how spoiled and selfish they could be and then simply got their wish. This silly thinking shows the naiveté of viewers and lack of understanding of the toughest business in the world -- to think that think any parent, no matter how powerful, could make a show sky-rocket to success on HBO for their child. And even if they could wield that magic wand, they can't bless their child with talent. As much as it might irk people to face it, Williams, Dunham and co. got to the top all on their own -- and this episode is living proof of that fact.

"Panic In Central Park" is not just episodic television -- it is an amazing, timeless short film that embraces New York, youth and the quarter-life crisis. It shows off that Dunham is well worth all her praise as a writer, and the same way Girls found one of the best actors of this generation in Adam Driver, it proves that Williams and episode co-star Christopher Abbott are major acting forces to be reckoned with and will totally change the game. The episode was, without any exaggeration, the best piece of work on television this year, and Williams carried it fearlessly and flawlessly.

Here, the unbelievably gracious and modest Allison Williams shows just how little her work ethic resembles her character as she sits down to talk about the fantastic episode, how she enjoys challenging herself as an actress, and what's next for Marnie.

Talk about how "Panic In Central Park" came about.

This was really Lena [Dunham] doing what Lena does best. The episode reminded me a lot of my favorite episode of Girls, "One Man's Trash," another stand alone episode that was also directed by Richard Shepard -- so that made me even more excited. The idea was proposed and then tossed around for a while, and we didn't even know if Chris [Abbott] was willing to do it or not. Then, finally he came on board and I realized it was happening, so I finally I let myself get excited because it really was such an amazing script, and I truly I think Lena truly did such a wonderful job and I was just so excited to work with Richard, so I was really glad it came to fruition.

Talk about how grueling this episode was for you -- walking all around New York in bare feet, wet and in the freezing cold...

I didn't mind any of that. As an actor, I actually seek that out and want to be put in positions that are challenging. The bare feet part really didn't matter to me at all, as weird as that might sound, because I go barefoot all the time and I'm really comfortable barefoot. I never filmed anything underwater before, so that was something new and certainly a challenge -- but another one I gladly embraced. One of the most challenging parts actually was how on display I was. When we first started shooting Girls, it was funny because people would come up to us in New York and ask us all the time on set: "Is anyone here?" And I knew what they were saying, like, "Is anyone important here that we would care about?" And I would always answer truthfully like, "No, Sarah Jessica Parker isn't here." [Giggles sweetly] And as time went on and the paparazzi has focused on our show more, we have gotten more publicity -- so it made me a lot more vulnerable to be walking around like that, wet and in that classic red dress -- but I think it helped me get to Marnie's place of vulnerability.

How was reuniting with Christopher Abbott, who you hadn't worked with since season 2?
It was very definitely very meta, because like Marnie, I hadn't even seen Chris since the last time we filmed, so it was very much like reuniting with an ex. And we are very different in the way we do things, and our processes, but the second you are back around a person it's like all those little things come right back. All the little jokes resurface -- like the joke Charlie makes about Marnie's uncle. Chris is a really great actor and I was really thrilled to get a chance work with him again on this.

Marnie has been through a lot. Her boyfriend randomly abandoned her, her career has ups and downs, she got stuck in an emotionally abusive relationship, and audiences rarely cut her any slack. This episode more than ever shows a very human side of Marnie and that shows she deserves love. Describe this.

A lot of fans have told me this, that they are sort of angered by Marnie -- and I've been very thankful that for the most part they've been able to separate me from her when they do so. But there is something about Marnie and her desperation to be perfect that just bothers people -- it could be that she thinks she's better than everyone, or she thinks she's pretty, or that she thinks the world owes her something. I think audiences do like to see Marnie punished for her bad decisions. Even myself, at times I feel like just shaking Marnie to sort of wake her up a bit, and in this episode people get their wish because they got to see her drown quite literally for a minute and in that moment really she really found a level of self awareness that had been missing and it humanized her and made her let her guard down while being caught up in that storm, which fans of the show had wanted to see for so long.

Girls really nails the Y generation and it's entitlement issues. Do you think that's why audiences have struggled with the show at times, and particularly with Marnie -- because the truth hurts so bad, and they see so much of themselves and their mistakes in it?

Yeah, there's definitely something uncomfortable about Marnie for audiences to watch. It's definitely not comforting to watch a character who represents traits that a person can find unpleasant in others and certainly not themselves. But, there is a plus side that makes it so relatable because it is just so real and Lena's writing is so honest. So many fans come up to me and tell me how much they appreciate the show, and Marnie -- especially after "Panic in Central Park" -- which is really amazing to hear as an actor.

What can we expect for Marnie as the show comes into its final season?
I think this is where the Marnie inside of me has kept constantly coming out. For years now I keep asking Lena how it will end, and expecting or hoping that Marnie will be wrapped up in a sweet little bow -- but I'm really grateful that Lena keeps reminding me that this kind of thinking isn't exactly real life. In real life, people usually take one step forward and two steps back -- and that's certainly been the case with Marnie, and Girls tries keep it as close to real life as possible -- which is something I've really grown to appreciate. That said, as an actor, I can say that we are nearing a place that will bring Marnie to an ending that is satisfying, and I hope fans can see the beauty in this ending and trajectory as well.

What can we expect from you coming up?
I have a horror film that I just shot called Get Out, directed by Jordan Peele that deals with racial issues -- and I just thought that was a great way to talk about such a relevant issue like that, using horror to talk about racial issues? I really thought that was brilliant. I would also really like to do more musicals and maybe even focus on more singing, but I would absolutely hate to annoying people with that -- because I know how people can get about actors who sing...[It quickly becomes abundantly clear that the sweetly modest Williams, who should strive to do anything her heart desires, is a far cry from her on-screen persona], and then of course there is the sixth season of Girls!

Hopefully, what we can expect coming up for Williams is an Emmy for her hard-hitting work this year on Girls. Not because she's entitled to it, but because she earned it.
Girls returns on HBO in the spring.