A smaller cousin of the Tyrannosaurus rex, called Allosaurus, may have fed on its prey in a fashion similar to modern-day falcons, a new study finds.

Researchers at Ohio University in Athens found that while a T. rex whips its head from side to side to gorge on its victims, the Allosaurus — a theropod that lived about 150 million years ago in the late Jurassic period — may have been a more dexterous hunter, using its neck and body to tug flesh from carcasses, the same way a falcon does. 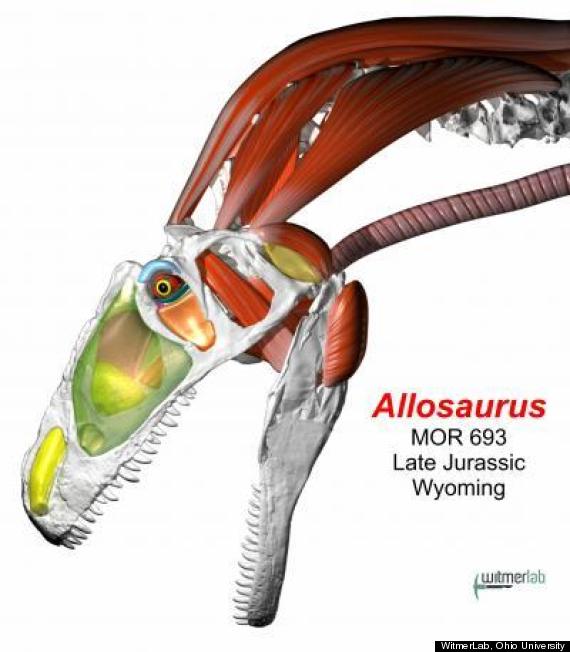 This illustration shows skeleton and soft tissues in the head and neck of the predatory dinosaur Allosaurus.

"Apparently one size doesn't fit all when it comes to dinosaur feeding styles," Eric Snively, a paleontologist at Ohio University and lead author of the new study, said in a statement. "Many people think of Allosaurus as a smaller and earlier version of T. rex, but our engineering analyses show that they were very different predators." [Image Gallery: The Life of T. Rex]

The study's findings were published online today (May 21) in the journal Palaeontologia Electronica.

To study the dinosaur's feeding technique, Snively and his colleagues ran sophisticated computer simulations of an Allosaurus' head and neck movements using a high-resolution cast of the dinosaur's skull and neck, plus CT scans of its bones. By combining dinosaur anatomy with mechanical engineering and computer visualization, the researchers were able to experiment with how the Allosaurus attacked prey, fed, or simply looked around.

"The engineering approach combines all the biological data — things like where the muscle forces attach and where the joints stop motion — into a single model," study co-author John Cotton, a mechanical engineer and assistant professor in the Russ College of Engineering and Technology at Ohio University, said in a statement. "We can then simulate the physics and predict what Allosaurus was actually capable of doing."

The researchers worked with anatomists to "re-flesh" their 3D Allosaurus computer model. In the process of building these neck and jaw muscles, air sinuses, and other soft tissues, the researchers found an unusually placed neck muscle, called longissimus capitis superficialis.

In most other predatory dinosaurs, including the T. rex, this neck muscle stretches from the side of the neck to a bony structure on the back outer corners of the skull, the researchers said.

"This neck muscle acts like a rider pulling on the reins of a horse's bridle," Snively explained. "If the muscle on one side contracts, it would turn the head in that direction, but if the muscles on both sides pull, it pulls the head straight back."

A different kind of predator

With the Allosaurus, however, the researchers found that the longissimus muscle was attached much lower on the skull, which would have equipped the dinosaur with a different set of head and neck movements.

"Allosaurus was uniquely equipped to drive its head down into prey, hold it there, and then pull the head straight up and back with the neck and body, tearing flesh from the carcass … kind of like how a power shovel or backhoe rips into the ground," Snively said.

In today's modern world, this same feeding technique is seen with small falcons, the researchers said.

The scientists also found that the Allosaurus had a relatively light skull, which likely made it a more dexterous predator, compared with T. rex, with its massive, toothy skull.

"Allosaurus, with its lighter head and neck, was like a skater who starts spinning with her arms tucked in, whereas T. rex, with its massive head and neck and heavy teeth out front, was more like the skater with her arms fully extended … and holding bowling balls in her hand," Snively said. "She and the T. rex need a lot more muscle force to get going."