When people try to put human faces on the those affected by World War II, they often focus on Nazi rallies, the Holocaust, the Luftwaffe's bombing of London, and the Japanese who survived the nuclear bombings of Hiroshima and Nagasaki.

In its dual capacities of documentary and narrative films, cinema has captured many historical moments (as well as producing some fine dramas set during World War II). Whether composing music for the 1952-1953 television series entitled Victory at Sea or the Broadway stage (South Pacific, The Sound of Music), Richard Rodgers made indelible contributions to how the effects of war were framed in people's minds. His musical theme entitled "Beneath the Southern Cross" reappeared in Me and Juliet (which opened on Broadway on May 28, 1953 and ran for 358 performances). The show's hit song, "No Other Love," uses the same music.

Now that 70 years have passed since the end of World War II, it's interesting to look at it from new perspectives. Although I doubt there was any collaboration between the two San Francisco summer festivals that did so, the results were fascinating.

One of the documentaries featured in the 35th annual San Francisco Jewish Film Festival focused on the cinematic propaganda machine created by the United States Office of War Information. The agency's efforts aimed at domestic audiences were obviously intended to support the war effort.

Newsreels and short films created for foreign markets (especially after the war's end) were crafted to give the war's battered survivors a more favorable impression of Americans and counter any prevailing negative stereotypes.

What most people don't know is that the OWI's newsreels were produced under the leadership of screenwriter Robert Riskin (who won an Oscar in 1935 for It Happened One Night) and was a frequent collaborator with director Frank Capra. Riskin was also married to Fay Wray (the star of 1933's King Kong). Among the many talents that worked for the OWI were Aaron Copland, Alan Cranston, Lee Falk, Archibald MacLeish, Gordon Parks, James Reston, Arthur M. Schlesinger, Jr., Robert Sherwood, and Josef von Sternberg, Without a doubt, the favorite OWI film shown around the world was 1943's The Autobiography of a Jeep.

In retrospect, some of the OWI's films may seem a bit campy to today's audiences. Many, however, were translated into 20 languages and screened around the world. Narrated by John Lithgow, Peter Miller's documentary, Projections of America, pays tribute to the work of Riskin and the OWI's secret film unit. 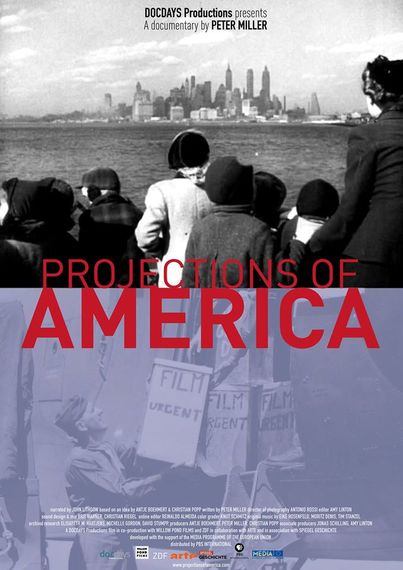 Poster art for Projections of America

Because of the film's dual narrative (covering Riskin's marriage as well as the demands of his work for the government), Projections of America is a oddly compelling documentary which packs a lot of history into 52 minutes. Here's the trailer:

Stock footage from World War II (such as the material included in the following clip) plays a major role in the design and dramatic exposition of Two Women, a new opera by Marco Tutino (with lyrics by Tutino and Fabio Ceresa) which received its world premiere from the San Francisco Opera in June. Directed by Francesca Zambello (whose integration of film into the San Francisco Opera's recent production of Der Ring des Nibelungen was a major factor in its dramatic strength), Two Women's use of archival film -- combined with S. Katy Tucker's projections -- created a stunning solution to shaping a story about the brutalities of war and the misery of those who suffer through them.

A co-production with the Teatro Regio in Turin, the new opera is an adaptation of Vittoria De Sica's 1960 film starring Sophia Loren, Jean-Paul Belmondo, Eleonora Brown, and Raf Vallone. Because the Music Critics Association of North America was in town for the world premiere, a great deal of copy was generated debating whether Tutino's score should be called neo-Verismo, faux-Puccini, or mildly derivative. 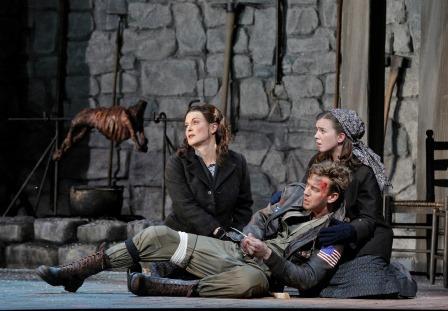 Fuck that shit. Having attended far too many operatic premieres (which were not just musical duds, but crashing bores as well), I was thrilled to be fully engaged with a new piece of opera/musical theatre whose score positively yearns to be sung. Tutino's orchestral interludes have a near-cinematic sweep. Even with a full orchestra, I never had the feeling that his writing overwhelmed (or ignored) the singers -- an extremely rare achievement for a contemporary composer. This is passionate, theatrical, and highly accessible music free from the curse of academia. 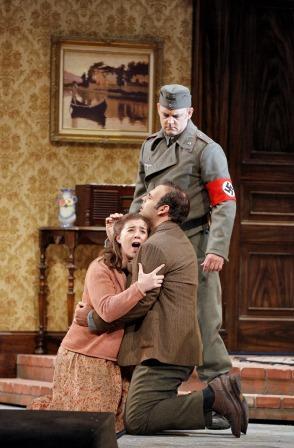 "I am enthusiastic about composer Marco Tutino's creation. This opera was born out of a conversation we had years ago, one evening in my house in Tuscany. I asked Marco, 'You know which opera is missing today? La Ciociara (Two Women)!" Operatic elements were present already both in the novel and film. And why? Because of the presence of a heroine, Cesira, that comes from the people. Famous characters don't need to have their stories told -- history tells their stories. A popolana, a woman from the people, doesn't have the same privilege. Cesira's story is incredibly touching, but it would not have ended up on the front pages of the newspapers because it was nothing compared to the bombed cities and concentration camps of World War II. Yet, on stage, with the right music, the humblest stories become eternal. Cesira's story becomes about us, about deeply understanding the personal suffering experienced during the war." 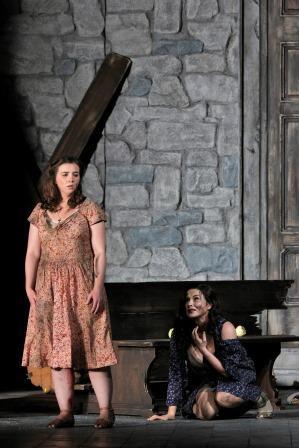 Rosetta (Sarah Shafer) and her mother, Cesira
(Anna Caterina Antonacci), are in a state of shock
after being raped in Two Women
(Photo by: Cory Weaver)

"It is important in our time to write stories and music to which everybody can feel connected. I consider this to be an invitation to all artists: 'Write the present while looking at the past to navigate the future,' as Verdi said. For example, Marco's music is rhythmically and harmonically complex, but at the same time, it is connected to bel canto. In his score, there are harmonic explosions in which you recognize yourself and say, 'This is the music that belongs to me and speaks to what I am feeling!' When Cesira sings a lullaby to her daughter after they are raped, she sings a song of how profoundly she feels the tragedy of their situation, and how much her daughter needs to sleep, and to forget -- even just for half an hour." 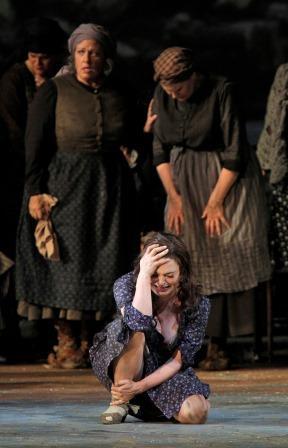 Traumatized by her rape, Cesira (Anna Caterina
Antonacci) cries before the villagers in Two Women
(Photo by: Cory Weaver)

From a musical standpoint, the evening was a triumph for the singers as well as for the musicians in the pit. As Cesira, Anna Caterina Antonacci delivered a heartbreaking performance as the mother who leaves Rome, hoping to find a safer life for her child back in her home town, only to end up getting raped alongside her 16-year-old daughter. Sarah Shafer's Rosetta was tenderly sung when her character was sane as well as subsequently, when she appeared to be mentally defeated and sexually starved following her rape. 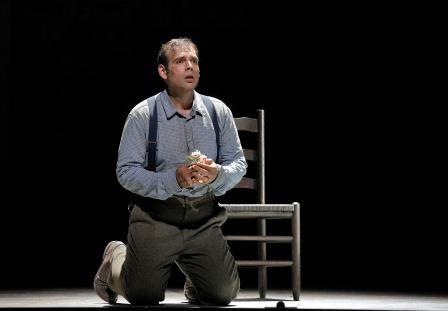 Dimitri Pittas made a smashing debut as Michele, the schoolteacher and tender-hearted intellectual whose concern for Cesira and Rosetta was a far cry from the brutish behavior of Giovanni. With a powerful tenor voice (which one hopes to hear more of in future seasons), Pittas commanded the audience's attention whenever he was onstage. As Giovanni, Mark Delavan pretty much recycled his portrayal of Scarpia (the loathsome and similarly amoral villain from Puccini's Tosca). 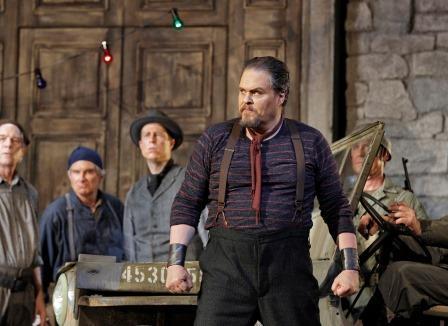 Peter Davison's sets worked well as a framework for the stage action as well as the filmed projections with Jess Goldstein's costumes adding plenty of local color. At the risk of spouting heresy, I have to admit that I was much more drawn to Tutino's passionate writing for Two Women than I was to Hector Berlioz's mammoth score for The Trojans. Here are some highlights from Tutino's new opera: