ATACAMA DESERT, CHILE -- Astronomers from around the world gathered here today for the long-awaited inauguration of the Atacama Large Millimeter/Submillimeter Array (ALMA), a powerful new radio telescope that some are calling the best ground-based observatory in the world.

Decades in the making, the $1.3-billion telescope is the result of a partnership between the U.S., Chile, and more than a dozen other nations in North America, Europe, and East Asia.

It’s designed to detect faint radio signals from deepest space, affording an unprecedented look at the universe’s oldest galaxies and giving astronomers a powerful new tool for studying the birth and evolution of stars and planets. 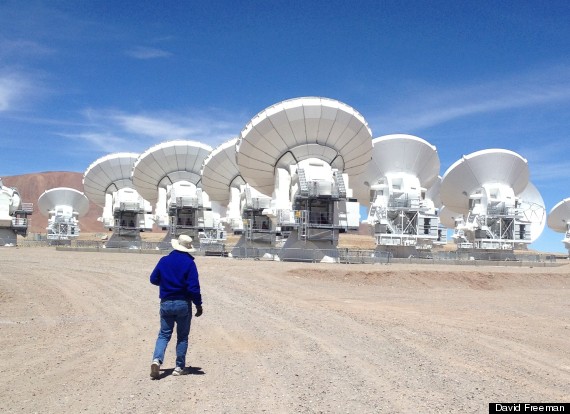 Another focus of ALMA will be astrochemistry—specifically, the formation and distribution of complex molecules, including the organics that are the building blocks of life. So while ALMA wasn’t built expressly to aid the search for extraterrestrial beings, astronomers believe it may provide important clues.

"ALMA was designed to be an incredibly powerful tool for discovery, not for just the current grand challenges in astronomy and physics, but also for new mysteries we have yet to encounter," Tony Beasley, director of the U.S. National Radio Astronomy Observatory (NRAO), said in a written statement. NRAO oversees the North American portion of the project.

Among the speakers at today’s ceremony were President Sebastian Piñera of Chile and Dr. Subra Suresh, director of the National Science Foundation, which provided the $499 million contributed to the project by the U.S.

There was also a video shout-out from astronauts Tom Marshburn and Chris Hadfield, who are currently orbiting the Earth aboard the International Space Station.

The centerpiece of ALMA is an array of 66 massive 12- and 7-meter dish antennas on a plateau 5,000 meters (16,500 feet) above sea level in the Atacama Desert, one of the driest places on Earth.

The extreme elevation and low humidity at the site help minimize the interference caused by water vapor in Earth’s atmosphere.

But what’s good for signal detection makes things hard for ALMA’s scientists and technicians. To make them more comfortable in the thin air—and to reduce the risk of altitude sickness--regulations require people who work at or even visit the “high site” to undergo medical screening and are encouraged to breathe supplemental oxygen.

Fifty-four of the 100-ton dishes, including 23 of the 25 that ultimately will be contributed by the U.S., are now in place at the high site. They’ll be joined in the coming months by the remaining 12 dishes, which are now being readied at a second ALMA facility, located nearby at a more hospitable elevation of 3,000 meters.

The dish antennas are the most precise ever made, capable of maintaining their parabolic shape to within half the diameter of a human hair across their full spans, according to materials provided by NRAO. They can be remotely “steered” to zoom in on almost any part of the night sky. And with the help of a pair of giant 28-wheeled transport vehicles, the dishes can be picked up and repositioned across a 16-kilometer swath of the plateau—in effect, giving ALMA the observing oomph of a single telescope 16 kilometers wide.

For all its technological virtuosity, though, the telescope’s greatest promise may lie in the powerful emotions it stirs.

“We used to be able to see only five or 10 feet in front of us, when we discovered fire,” Dr. Paul Ho, director of Taiwan’s Institute of Astronomy and Astrophysics and a member of ALMA’s board of directors, said in a press conference after the ceremony. “Then the light bulb was invented, and then a better light bulb. Now we can look all the way to the edge of the universe. That is an exciting thing. This is a very exciting moment.”