Ever challenging, provocative, and fun, The Garage Theatre celebrates its venerable first decade with a production of Ethan Coen's Almost An Evening. Directed by Kristal Greenlea and Eric Hamme, the three pieces, "Waiting," "Four Benches," and "Debate" address and then skewer our picayune attitude about Big Picture matters. Providing an hilarious middle ground between theatre that teaches and theatre that entertains, the well-acted, nicely-directed production raises ingenious what-if questions about subjects that may have seemed serious to us in third grade though, as we got older and wiser, most certainly are not.

Characterized by diverting scenarios and staging that is as minimal as the direction is invisible, the scene-lets are slight but funny, appetizers, not main courses. We laugh at them the way we laugh at early Woody Allen movies -- they suggest that serious inquiries into the afterlife, into duty toward one's country, are the province of madmen and saints, not of the majority of mankind.

What if, for instance, purgatory is simply an occasion for the bureaucrats of hell to goof on a hapless and hopeless soul who thinks the passage of a few hundred, no, make that a few hundred thousand years, in a windowless waiting room is no big deal if means ascension to and eternal residence in heaven? That's what happens to Nelson (Jason Weissbrod), all duded up and eager, anticipating passage through the Pearly Gates. Little does he know that this purgatory, attended to by a receptionist (Jessica Variz), who endlessly types on a portable typewriter, and two ineffectual paper pushers, Sebatacheck (Joe Howells) and McMartin (Matthew Anderson) is not just like a Monday morning at the DMV but one big, fat cosmic joke?

What if a British secret agent, Man One (Paul Knox), doing all sorts of nasty, off-the-grid stuff for God, Queen, and Country, tries to leave the service after Earl (Anderson), a Texas tourist, gets killed by accident in a New York sauna (thus making him a spy in a sauna that wants to come in from the cold)?

Finally, what if we could choose our God as we choose our presidents, based on a debate? The two candidates, the Old Testament God Who Judges (Knox) squares off against the New Testament God Who Loves (Anderson). Except that it's not a real debate but a staged one and one of the actors and two of the audience members (in character) afterward comment on everything but the issues the debate raised.

It's the performances, not the storylines, that illuminate the evening. In vignette one, Variz's staid secretary was a perfect match for Weissbrod's Jack Lemon-esque, increasingly exasperated Nowhere Man. Her face emotionless, his beet-red, contorted with anguish; her posture ramrod rectilinear, his twisted. In vignette two, Knox's derby-wearing, proper and polite undercover secret agent serves as a nice foil to Anderson's easygoing Texan on a visit to the Big Apple. In the third, Knox's F-Bomb-tossing, George Carlin-like screed against our unworthiness versus Anderson's mellifluous, velvety affirmation of our intrinsic goodness. 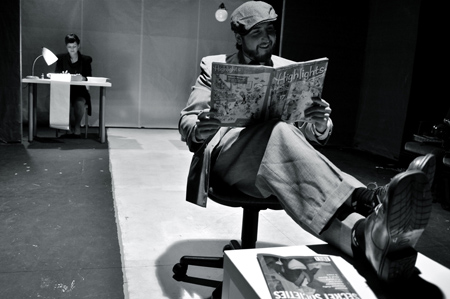