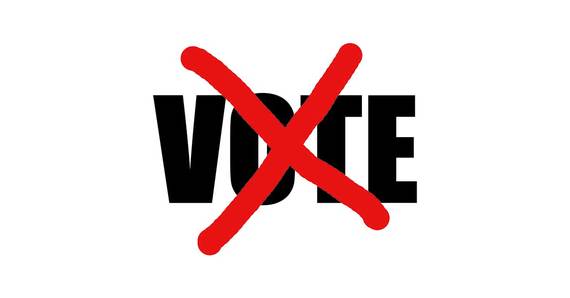 Today was a long day. I almost lost my vote. I had a feeling of disenfranchisement running through my entire body.

New York State (NYS) is a closed primary, which means you have to belong to a "party" in order to vote within that party. So if I want to vote for Bernie Sanders, I have to be registered as a Democrat, even though I'm independent.

Sounds simple. Except, in NYS, you have to change your party affiliation 25 days prior to the previous year's (2015) general election in order to be eligible to vote in the Democratic primary in the current year (2016). For example, to vote as a Democrat in the NYS primary on April 19th, 2016 you had to have changed your party affiliation by October 9th, 2015. Dizzy yet? You better sit down.

I followed the rules. I mailed out my and my ex's (who at the time was my gf) change of party registration forms prior to the October 9th deadline last year. However, a couple of weeks ago I looked up my registration through NYS Board of Elections (BOE) and I noticed that, even though my address was updated, my party was still listed as not affiliated, but my ex's party affiliation was correctly updated. I sent both forms out the same day, so there must've been an issue. Instead of freaking out I thought I'd re-register again through the DMV's online registration portal. I knew it was past the deadline, but I had to update my address again anyway and it was worth a try. I checked the BOE site today. No bueno. My voter record showed that my new address was updated, but under party it still said not affiliated. Even worse, my eyes were straining while browsing the BOE search site because the design looked like it was created by a 12 year old in the 1900s. Where the hell are my taxes going NYS?

I called up the BOE and explained my registration situation to a clerk who insisted that I didn't send a voter registration. We went back and forth as I explained that just because they don't have a form from me, it doesn't mean I didn't send it. He explained that he could not change my affiliation since the deadline had passed. I had screenshots of what had occurred, as well as a Time Machine backup that showed I had filled out a NYS voter registration form in September 2015 and I offered to e-mail him the information. The clerk explained that the chances of me being able to update my party affiliation was slim. I said that I would go down to the BOE office to speak to a supervisor because my vote was very important to me. So I got my ass up, in a fiery rage, and headed down there wearing my #Bernie2016 t-shirt. ¡Viva la Político Revolución ✊!

I've been volunteering for #Bernie2016 for almost a year now; he was only 3% in the polls and most people didn't even know he only owned one pair of underwear 😝. I've been really active for our movement. I wear my #Bernie2016 t-shirt once a week. I'm informing people about the issues. I'm phonebanking and facebanking. I'm registering voters. I've donated almost a $1,000 and I have $2,700, the max allowed, budgeted for the entire campaign. So being told I won't be able to vote for him, I felt what many people that have been disenfranchised due to "insufficient identification" must have felt: suppressed.

When I reached the BOE office my body was shaking. I've had to deal with retail stores refusing to take a return, restaurants screwing up my food, and other first world problems and I've handled those situations amicably. This, however, was my vote, my voice, I was fighting for. This felt like a third world problem. I was livid. Yes, using the word disenfranchised or to claim this is a third world problem may seem dramatic, but these types of situations are occurring all over the country. Whether it be voter ID laws (a.k.a. poll tax), registration cut-offs, or having to join a corrupt party, they are making us work like dogs in an agility competition to earn our right to vote.

After a frustrating debate with the clerk and his associate, I was able to convince them to issue a correction ballot, which is allowed by NYS law. Though, they keep this a secret because, well, you don't want people changing parties last minute to vote against the party's Hillary interest 🙄. It's not like NYS politicians are corrupt, or that over 40 elected officials in NYS have been accused of wrongdoing since 2003. With one of New York's own running for President while under investigation by the FBI.

I can understand why many Americans have given up on the process. I'm a highly informed and active voter myself. I've been very involved in the process and luckily I knew about the deadlines and I double checked my registration. I had the ability to go down to the BOE because my career gives me flexibility. Can you imagine how many people are going to show up at the polls in NYS on primary day and be told they can't vote because there was a clerical error, or because they didn't register by March 25th, 2016, or because they didn't change party affiliation by the ludicrous deadline of 6 months prior to a primary election. How many Republican/independent voters would've even known that they would have to register as a Democrat 6 months prior, if they wanted to vote for Bernie. People probably hadn't even made up their minds about what they were doing for Thanksgiving, let alone who they wanted to vote for half a year later.

Luckily, some states have moved towards same day registration as well as a semi/fully open primaries. So you can register the day of and vote in one of the parties of your choice. A couple of states have even passed laws to automatically register it's citizens. Like Vermont. You know Vermont? While we're discussing improvements. It's 2016. Can we start voting online or what? Or at least a national day off to vote? Pretty please?

This is why the political revolution is so important. We don't want to be part of a system that prevents us from participating. We want a government of the people, by the people, for the people and this hunger will only keep us burning 🔥.

Have you ever been disenfranchised? What's your story? Add your experiences to the comments.

For more articles, videos, and show information, check out my website at SadiqSamani.com.