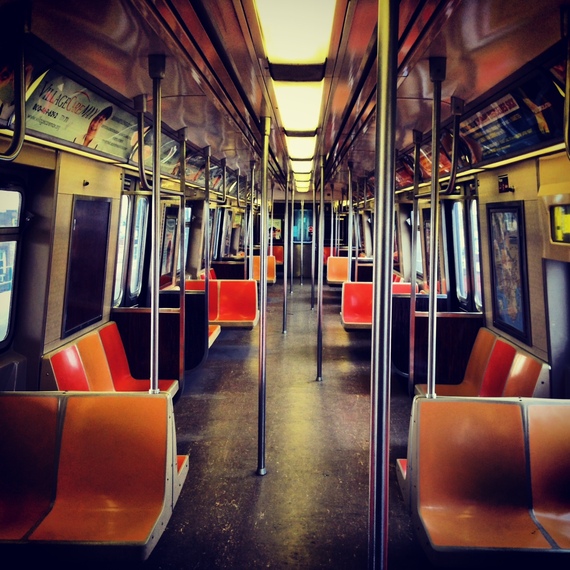 On any given Saturday night around midnight, New York City is on full display beneath the streets inside the bi-level concrete and steel subway platforms at the West 4th Street- Washington Square station. Opened in 1932 it's basically a hub where the A, C, E trains stop on the upper level tracks, and the D,B, M and F trains down below.

At that hour a lively assortment of service industry types and village revelers headed back home wait together while a coterie of pop, rock, soul and classical musicians capitalize on the infrastructural acoustics.

One recent Saturday when an A train pulled in after about a 25 minute wait, the cars were packed. No seats. Ladies and gentlemen laughing, babies crying, people wall to wall, and thus for me began what felt like sort of jovial yet annoying Monday morning rush hour flashback, as the normally express train ran local all the way to Harlem.

Regardless of the reasons, a standing room only Saturday night A train tells us that mass transit in New York City is popular. And, one might think the mothership agency that oversees it all, the Metropolitan Transit Authority should be meeting that demand with more frequent train service.

The subway system is literally a major component of this city's lifeline. It gives back more money to the city and state's economy than what its leaders allocate to it. It was the subway that allowed New York City to grow in the directions it did -- and does. Developers and real estate professionals will tell you that property values increase when a building or lot is located near high traffic train stations.

For better or worse, access to dependable subway service made parts of Brooklyn, Queens appealing to thousands of city newcomers and former sworn Manhattanites who got priced off the island. Without a strong L train, it's not likely the current hipster nation known as Williamsburg would be as 'hip' as it is now.

Taking it one step further, some might say the subway makes everything else in New York City possible -- or at least almost.

"Everything in New York emanates from our ability get around efficiently at a reasonable cost," said Andrew Albert, chair of the New York City Transit Riders Council.

Adding and or improving subway service costs money. Ultimately, the MTA would need more dedicated funding resources for its operating budget, and for the long haul improvements, it would need to better manage its more cash and perhaps focus greater effort in speeding up the ongoing multi-billion dollar construction and technology improvements that will enable trains to move more efficient and frequently.

Right now, just to keep the system in a state of good repair costs $1.5 billion annually. The improvements cost extra.

Improvements include new technology, such as Communications-Based Train Control, already in use on the L line, provides the ability to run more trains each hour, In fact, thanks to CBTC, New York City Transit was able to add 98 weekly round trips to the L train schedule.

A week after that particular late night train ride back to Harlem, I read news reports that the state had taken $30 million from tax revenue dedicated to help the Metropolitan Transportation Authority pay down debt, and instead put that money into the state's general fund.

As Capital New York's Dana Rubenstein put it in her report that day, the move is 'an avoidable diversion of scarce resources from a financially fragile agency that will, if anything, serve only to increase the burden on mass transit users who are already suffering faster-than-inflation fare hikes.'

Analysis by transit advocate groups like Riders Alliance and New York Public Interest Research Group's Straphangers Campaign, said that $30 million could have been used to restore mid-day, nighttime and weekend service on the 1, 7, A, F, J, L and M lines.

Each of those subway lines saw service cuts back in 2010 when the MTA faced a budget crisis after real estate values went down during the recession. The MTA budget is very dependent on dedicated taxes that comes from real estate, so, it's subject to market turns.

But an MTA a spokesperson disputed the activist's claims saying the money wouldn't have allowed any service restorations this year.

Instead, he said in an email message that the MTA has in hand the amount needed for the service increases it budgeted for for this year and is at the level it expected to be able to keep the 2015 fare increase at the level anticipated last December.

The MTA budget includes $18 million in service increases, and the agency said it reduced the upcoming fare increase by about half.

"The money in question wouldn't have been able to be used for service increases this year," the spokesman said.

But, according to the budget the MTA board adopted in July the service improvements don't have that much impact on subway service anyway. It looks like the only trains' slated for any sort of improvement are the M train, which will get service to the Delancey Street-Essex Street station from the Myrtle Avenue station on weekends, and better G train service between 3 pm and 9 pm.

No matter how you spin or shake it, the MTA budget clearly treads water. And anytime the state takes money from the MTA, ultimately, it's a bad thing for subway riders.

This latest MTA funding cut comes after the legislature approved Governor Cuomo's plan to cut tolls for Staten Islanders who cross the Verrazano Narrows Bridge in a car. To pay for that December decision, the MTA will be kicking in $7 million for those toll cuts.

Meanwhile, Andrew Albert says the increased ridership on the New York subway system is a testament to the subway's status as as a monumental New York City success story. But he also said that means, the need for increased dedicated MTA funds is more pronounced than it ever.

"Those of us that would like to see more service restorations from the disastrous service cuts of 2010, are set back by the state's latest move," said Albert, who's also a board member of the Permanent Citizens Advisory Committee to the MTA.

He said it's as if the state is penalizing the MTA for the success of attracting more riders.

Put grandly yet simple, to be a well functioning and civilized city, urban experts have often said, the three fundamental services are police, fire and sanitation. Albert believes transit should be among those three, which makes four, at least in New York City.

There's no doubt that New Yorkers have a love hate relationship with the subway -- as they often do with the city itself and I count myself among them.

It stands to reason, that as more New Yorkers begin to better understand how the MTA gets and spends its money, how it raises fares yet doesn't increase service for thousands each day, how it takes years to install new technology that would bring the system literally up to speed with the modern world, more and more New Yorkers will likely become increasingly engaged and politicized about transit.

"Most New Yorkers may not fully understand the various and complicated city, state and federal sources the MTA gets its money from," explained Albert.

With that, Albert made sure to point out the visible improvements, the newer cars, the L train's CBTC technology as well the eventual CBTC installation on the 7 train, and absolutely no one can deny the amazingness of new capital projects such as the 7 train extension and of course, the 2nd Avenue subway .

But, he agrees that rider frustration over subway service, here today, right now, is measurable.

"All commuters know is that they saw massive service cuts in recent years, and at the same time massive fare hikes. New York City transit users want something for their money," he said.