Day 12 on the Nico Vega national tour - we're in Pomona, headed toward LA. If you missed my previous Almost Famous: On the Road with Nico Vega posts, you can find Part 1 HERE and Part 2 HERE.

I can hardly remember where we were last night, or the day before that...or what we did a week ago. All of the days and cities and hotel rooms blend together - being on the road is a total mind game. I do remember landing in Houston at some point...staying with guitar player Rich's family, taking a salt water hot tub at night and drinking fresh coffee by the pool in the morning. 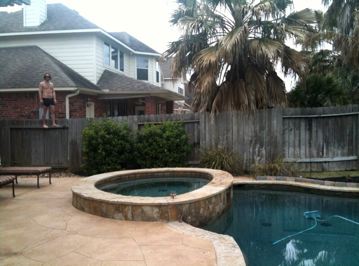 I also remember piling into a van at 2am after the Austin show with some of the guys from Soundtrack of our Lives (the band we're touring with). We ended up on a random residential street with a big bouncy house - inside of which people were jumping around naked and drunk. I also remember braving a blizzard in the middle of the night on the drive from Dallas to El Paso. This all happened in the last 6 days, and do trust that I'm leaving out a lot of juiciness.

It's amazing I even have enough brain power to put together a post. But as I recall, in Part 2 - The Greenroom - we left off with Nico Vega right before performance time. So it would only be appropriate that the next place we hit be The Stage. I could absolutely flood you with words right now about the Nico Vega live show. But instead, first, I'm going to urge you to watch this video.

Now that you have some sense of the live show, here goes my attempt to put it into words: electrifying, thunderous, transcendent, rhythmic, sweat, rise up, head banging, swaying, black eyeliner, chemistry, HitPunchStompSmack, sequins, hard, seductive, scream, tear, convulsing...get the gist? It's a wild, all encompassing sensory experience. Want me to break it down by each sense? Fine here goes:

SEE: Everybody in this band is sexy and they've all got an impeccable sense of style. 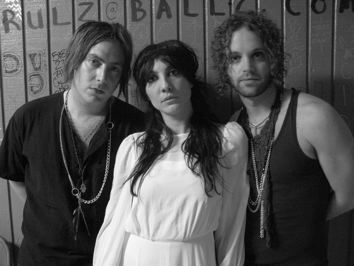 * Rich (guitar, right) is way too rock n roll for his own good - his skinny jeans might as well be leggings, he's usually showing some kind of chest and/or nipple via a skimpy tanktop. He glides back and forth across the stage, but he mostly stays on the left side by his pedal board. He can sometimes be seen looking mellow and focused. Other times he becomes possessed - his eyes rolling back into his head, and his body convulsing uncontrollably.

* Silhouette-wise, Dan (drums, left) trends toward the more hippie/western side of rock. With his hair hanging in his face, he is usually donning skinny jeans, some kind of loose/flowy shirt, and a worn-in pair of pointy toed boots (which he exchanges for sneakers when he plays). For a drummer, Dan is out of his seat a remarkable amount of the time. He alternates between standing and sitting, yelling and HitPunchStompSmacking. He's abusing and making love to the drums at the same time - it's a scary/beautiful thing.

* Singer Aja's stage gear has evolved into an affinity for robes and long ethereal dresses. Sequins, hanging sleeves, wrap arounds, layers...the more elaborate and unique the better. She always performs barefoot. Aja's movement is never predictable - you can find her anywhere from jumping atop the drum set to laying flat on the floor. She is fluid yet jerky, rhythmic yet erratic. Kind of like the musical equivalent of one of those mechanical bulls.

HEAR: It's rock, it's blues, it's country, metal, funk, and folk. It's old and it's innovative, it's romantic and it's political. Rich's guitar riffs each carry a personality and soul guaranteed to appeal to a sense of pleasure and/or nostalgia in each person. Dan's beats make standing still impossible. Even the stiffest stiffs are bound to do a little head-bobbing at the very least. Aja's voice is as thunderous and screaming as it is husky and seductive.

SMELL: Each of these people smell fairly decent. But at the show you'll probably smell a fair amount of crowd sweat. People get down at their shows - a lot of jumping results in quite a bit of BO.

TOUCH: Trust me, you'll want to touch these people (yeah that's right, I get to do that whenever I want). Get in the front row and you just might.

Want more? Their new video just dropped for one of my favorite songs, Gravity. I had nothing to do with it, but I'd like to do a little visual bragging about it by posting it here: