The term alpha female originated in my field of animal behavior, but has acquired new meaning. It refers to women who are in charge, for example, by flirting and dating on their own terms. It is also used maliciously for a loud-mouthed, controlling woman who has no patience with deviating opinions. The original meaning of "alpha female," however, is exactly the same as that of "alpha male": being the highest ranking member of one's sex.

Since this nation is seriously playing with the idea of electing an alpha female -- and quite apprehensive about it -- it may be informative to look at the many top females that I have known, both monkeys and apes.

Every primate group, including those dominated by males, has one. The ranks of both alphas are often linked. For example, I knew a group of rhesus monkeys with an alpha male named Spickles, who was so old and arthritic that younger and healthier males could run circles around him. They never seriously challenged the old male, though, because the alpha female, named Orange, always stood by Spickles' side if things got rough. Even though Orange herself deferred to Spickles, she apparently preferred to defer to him than to one of those snotty-nosed upstarts, who would take his place if she'd drop the old male. With Orange's support, Spickles ruled far beyond his prime.

This is Primatology 101: things are not always what they seem. We tend to think that high rank is based on being the strongest and nastiest, but much of the time it means being the best-connected. This also applied to Orange herself. The reason no male wanted to risk her wrath is that an alpha female often has massive support. A dozen or more females might come to her defense, and females are not nearly as reluctant to use their teeth on males than vice versa.

But the most impressive alpha females I have known were not monkeys, but apes [1]. In our group of chimpanzees, which lives under my office window at the Yerkes Primate Center near Atlanta, Georgia, we didn't know for about one year after the death of the previous alpha female who was going to be the new one. Normally, it's one of the oldest females, so our bets were on three females ranging between 30 and 35 years of age. Unlike males, females rarely show open rivalry over the top spot, which is decided by a combination of age and personality, both of which are non-negotiable [2].

One day, I watched as a small scuffle grew into something that sounded extremely serious. The chimpanzees were screaming so loudly, and the males moving so fast, that I feared a bloody ending. Suddenly all commotion stopped. The males sat down, panting heavily, while several females hung around them. The atmosphere was extremely tense, and it was clear that nothing had been settled. Then I saw who was our alpha female.

Peony, who had been resting in a corner got up, and literally all eyes turned towards her. Some youngsters approached her, some adults grunted softly the way they do to alert others, while Peony slowly and deliberately walked towards the center of the scene followed by everyone who had remained on the fringes. It looked almost like a procession, as if the queen arrived to mingle with the commoners. All that Peony did was groom one of the two males who had been central to the fight, and soon other individuals followed her example, grooming each other. The second male joined the grooming clique as well. Calm returned. It was as if no one dared to start things up again after Peony had so gently put a period behind it.

Peony, whom we informally call our "grooming machine," because she spends so much time grooming, solves all problems by being sweet and calm and reassuring, which may explain why I hadn't notice her status. Subsequently, I've seen other incidents that confirmed her absolutely central position, very much like Mama at the Arnhem Zoo, but without the latter's iron fist.

Mama is the most imposing alpha female I have known, one who in my book was more powerful than the males. In chimpanzees, males physically dominate females. There's just no way for a female, even several females, to stop a charging male, who is all muscles and might. Getting out of the way is the only option. But physical dominance is not the same as power, and Mama had all the females on her side. Some females were reluctant, but she knew how to handle them. If they ever took sides in an important dispute before Mama had made clear where she stood, for example, there would be repercussions. Later in the day, Mama would teach that other female a lesson she'd never forget. The renegade would have something to think about while licking her wounds.

I gave "Mama" her name because of her matriarchal position. All females obeyed her and all males saw her as the final broker in political disputes. If tensions escalated to a point at which an actual fight became inevitable, arguing males would rush to her, sit in her arms, each on one side, screaming at each other. She also sometimes brought males together after a fight, if they were hesitant to reconcile: she'd tug at the arm of one until he sat next to the other. She seemed to care about harmony within the colony. 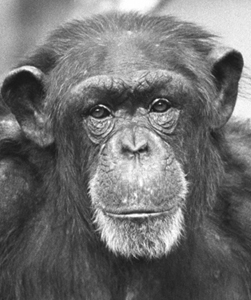 1 - Age helps a female more than a male. Since physical strength and stamina are largely irrelevant in the female hierarchy, getting older, more experienced, and better connected offers females an advantage. I have never seen a middle-aged female at the top of a hierarchy if older females are present (even though middle-aged females tend to be in better physical shape). Younger females arouse competition among males, which interferes with effective leadership. In human politics, too, the typical alpha female is post-reproductive: Golda Meir, Indira Gandhi, Margaret Thatcher, Angela Merkel, etcetera.

2 - Female solidarity is the key to female leadership. Since males respect power better than age and personality, the alpha female must be heading a large coalition to effectively deal with males. Tight control over her own political party might provide this in human politics, but it seems unlikely to me that any female could have a stable top position without massive support from members of her own sex. The only way to secure this support is by being sexually non-threatening, and to be perceived as a champion of female causes. Mama was great in this regard, always siding with females against males, never the other way around. The same colony included another high-ranking female who tended to join males against her own sex: she was despised and distrusted by all females.

3 - An alpha female needs to be able to rise above the parties. This is hard for females. Older female primates often head large families and have a natural tendency to be extremely loyal and committed to every member. This bias may be fine in relation to kin, but if extended to friends and politics, it becomes a problem. The effective alpha female needs to be able to reach out beyond her inner circle, build bridges, groom rivals, all of which comes harder to females than males, who lead more opportunistic political lives, with shorter memories for perceived slights. Impartiality may be the greatest challenge for any female politician, although I must admit that the Bush years have reduced my confidence that men are so much better at it.

4 - While high-status males enjoy great sex appeal, the relation between power and sex is different for females. Designer, Donatella Versace advised Hillary Clinton to tap into her feminine side by wearing dresses and skirts instead of pants, but being attractive and feminine only gives sexual power - a flimsy basis for political power. In order to build a broad coalition that includes her own gender, a female should not be overly attractive (see above). High status also won't increase her attractiveness as it is a turn-off for most men. A prominent French politician compared power to pastry - she loved it, but knew it wasn't good for her. [3]

[1] Apes are no monkeys. Bonobos are apes about which we know less than about chimps, except that the alpha female usually dominates not only females, but also males. The reason for this is not that males are smaller or weaker (they are more muscular than females), but that male bonobos lack effective coalitions, whereas the females cooperate readily. Alpha females of this species are interesting, therefore, especially since bonobos are genetically just as close to us as chimpanzees. We don't know much about how bonobo females achieve alpha status, except that in their case, too, age works in their favor.

[2]At zoos, stranger apes are sometimes introduced to each other. With males this often leads to a fight, either immediately or with some delay, which then determines who will be dominant. In females, in contrast, the dominance relation is often decided at first glance, without any physical contest. One female walks up to the other, the other defers, and things are settled for the rest of their life. Because of these extremely rapid decisions, personality and temperament are thought to be the deciding factor.

[3] Males can increase their reproduction by mating with many females, whereas mating with many males obviously doesn't increase a female's reproduction. The rules of the evolutionary game are entirely different for males and females, therefore, because reproductive success is what drives evolution. Genetic traits that help males compete for access to females -- such as power striving -- will be passed on to their sons. This process has been going on for millions of years, and the human male has inherited this tendency. In modern society, there are plenty of reminders of the connection between male power and sex. Sometimes, such as during the Monica Lewinsky scandal, this connection is exposed with great fanfare and hypocrisy. This is an American/British peculiarity, though. Most other nations are more realistic about the sex-appeal of male leaders.