Altagracia Guzman, 81, walked slowly but purposefully from northern Manhattan to the financial district, virtually the entire length of the island, in an Occupy Wall Street demonstration intended to introduce more Latinos and blacks to the cause.

"When I came here 45 years ago there was inequality and racism, and still to this day the same is happening, and some of it has even gotten worse," Guzman, a native of the Dominican Republic, said in Spanish.

Answering criticism that the burgeoning Occupy Wall Street movement has remained largely white and young, hundreds of black and Latino residents of all ages joined local elected officials Monday in an 11-mile march from the tenements of Upper Manhattan to the high-rises of the financial district.

Marching to the beat of drums and horns, black and Latino community activists, labor leaders and ordinary New Yorkers kicked off their procession in Washington Heights, one of New York's most racially diverse neighborhoods. They dubbed Monday's march the "End to End for 99 percent," a reference to its path from one end of the Manhattan to the other.

Guzman, like many other protesters, seemed to break the mold of the typical Occupiers -- who critics say are mostly white and young.

Living her own version of the American dream, Guzman became an actress 10 years ago after working as a seamstress most of her life. She was cast as the grandmother in the movie "Raising Victor Vargas." She subsequently appeared in a handful of other films, such as "I Heart Huckabees" in 2004 and "Fighting" in 2009.

But despite Guzman's success in Hollywood, she said she identifies deeply with the hardworking immigrants in her neighborhood and thinks things have only gotten harder for them in recent years. She carried a sign that read in Spanish, "La inigualdad nos ENFERMA," and in English, "Inequalities make us SICK." 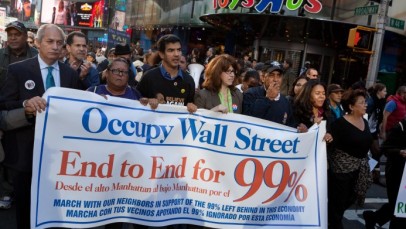 Ydanis Rodriguez, a New York City Councilman who represents the communities of Washington Heights, Inwood, and Marble Hill, said he helped organize the march because of the high unemployment that disproportionately affects his community.

"I am marching today because even as a member of the City Council, I am part of the 99%," he said. "This fight is important for Latinos, for the African American community, but more than any group, this is important for the working class and the middle class."

As Occupy Wall Street has spread to cities across the country and the world, the movement has been criticized for remaining largely white. In recent weeks, various minority groups have organized events in solidarity with the movement. At a Harlem church last week, more than 100 people gathered for the first general meeting of Occupy Harlem. And on October 21, over 30 people, including the activist scholar Cornel West, were arrested in Harlem while protesting against the NYPD's stop-and-frisk policy. Community leaders said the practice unfairly targets blacks and Latinos.

Guzman was cheered on and supported by the many young people who marched with her, with one young man offering her a ride back home once they reached the park.

A young Latino rap artist and longtime Washington Heights resident who calls himself Oveous also participated in Monday's march. The rapper said the gap between rich and poor was more apparent than ever

As the march approached Zuccotti park, Guzman trailed two blocks behind most of the protesters. Insistent on completing, but weary of answering reporters' questions, she pleaded, "Listen, I'm sorry Mami, I'm tired. I've got to keep marching now."

WATCH: Altagarcia Guzman Stopped By A Fan On The Street