Climate change is forcing cities around the world to rethink transportation. Indeed, cities across the Global South are increasingly seeing the repercussions of car-focused development and are beginning to experiment with integrating sustainable options into city plans, from bike lanes to better sidewalks to cycle-sharing programs. Commuters are stuck in traffic jams at peak hours, accidents are more and more numerous, and air contamination is becoming a serious issue. Alternative modes of transportation could be part of the solution. This article presents examples in four cities where new or old alternative transport systems are being promoted.

Shaima Abulhajj talks about Cairo, a city characterized by long delays and enormous traffic jams. In 1962, the government started to think outside of the box in order to address the newly forming congestion problem in Cairo by using another means to transport people and, at the same time, use the fact that people enjoy the Nile and the view from the river. It started to operate the River Bus. The River Bus is a way to avoid traffic and enjoy fresh air en route to the city. It has two main stations, and there are two types: the open roof and the closed roof bus. Experts believe that if the River Bus is well maintained and well managed, it can really help solve the traffic crisis in Cairo. But, the River Bus is still suffering from many issues and people are complaining about the service's current shortfalls (lack of security and safety, dirtiness etc.) 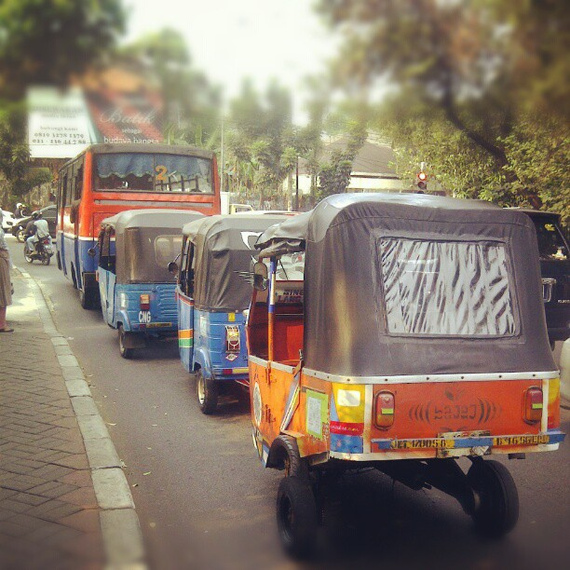 For Widya Anggraini, Bajaj is one of Jakarta's iconic vehicles. With its three wheels and relatively small size, bajaj has become a favorite for Jakarta residents to brave the bustling traffic. Yet, it is also one of the biggest contributors of air pollution. Because of its importance and the number of clients carried, the government decided to renew bajaj as a transportation means by switching to gas fuel. This program was executed by providing credit privileges to previous bajaj owners that are willing to make the switch. Pemprov DKI (Jakarta Provincial Government) partnered with Bank DKI to issue credit assistance. As of right now, there are 6,000 blue bajaj units spread throughout Jakarta. On top of that, promotion of bajaj as an alternative to short-distance public transportation is driven by its new online application. Similar to Gojek and Grabbike, the BajajApp omits the bargaining process, and customers only need to enter their pickup and drop off locations.

Biking in Medellin is a new but growing phenomenon. The creation of a bicycle-sharing system called "EnCicla" has triggered a shift in transport modes and cycling in the city is increasing. In 2011, three engineering students teamed up with the government to create a six-month-long pilot program to gauge if Medellín's residents would be receptive to a bicycle-sharing system. As the pilot program was wildly successful, the system has gradually expanded to other areas of the city. It already has 35,000 users, 52 bike stations and 1,500 bikes. Lou D'Angelo highlights one reason why the program has been so successful: it is entirely free. Both Colombians and visitors can sign up, and then borrow bikes for up to an hour before returning them to a station. Considering the increasing prices of public transport (a 30% increase in the last five years), this entirely free system is a great initiative to make the city more inclusive. 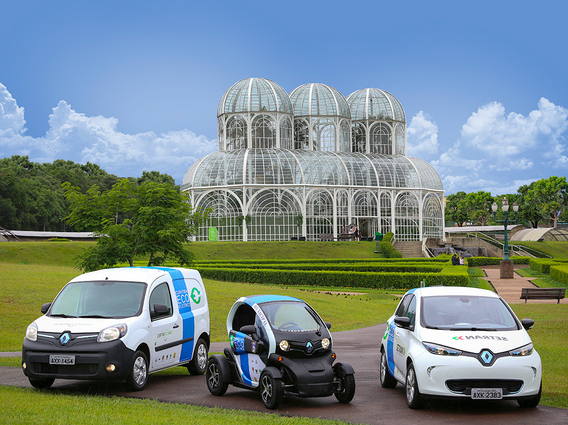 Though well-known in Europe, the car-sharing model is just taking shape in Brazil. As the city invests in collective solutions, such as building more exclusive lanes for buses and a subway, Andréa Azambuja underlines that the government is also trying to renew the role of individual transport. Inaugurated in 2014 by the city in partnership with the hydroelectric plant Itaipu Binacional, with the Renault-Nissan Alliance and the Center for Excellence and Innovation in the Automotive Industry (CEIIA) in Portugal, Ecoelétrico earned the capital the largest national fleet of fully electric cars and micro-buses. These vehicles have logged more than 80,000 kilometers while at the service of the Municipal Guard, the Municipal Transit and Curitiba Tourism Institute. In a new phase of implementation, the initiative is now in the process of directly benefiting the general population through a car-sharing system, with additional services such as wi-fi signal, shared bicycles and information centers.

These articles presented initiatives from around the world to promote alternative means of transport in cities. Check out more of the discussion on transportation on URB.im and contribute to the debate.