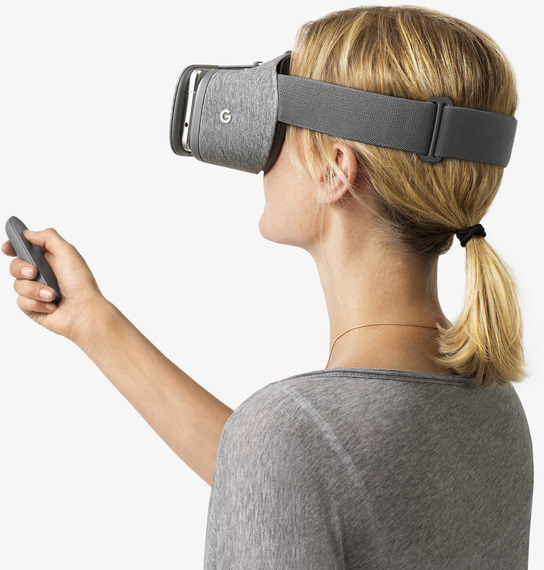 Your business, out in front, setting the pace in a new and lucrative market.

Your competitors lagging behind as you consolidate your reputation as the go-to brand in a fresh and exciting space.

Sounds like a dream scenario, right? Well, that's the end goal of something called the blue ocean strategy; a business theory that posits that businesses are better off looking for ways of tapping into an uncontested market space, rather than going toe-to-toe with traditional competitors.

And the imminent launch of Google Daydream could be a very real and very exciting opportunity to guide your business into uncharted waters.

Virtual Reality is an already growing industry. Some of the biggest tech companies in the world have their own VR offering in play, from Facebook (who purchased Oculus in 2014) to HTC and Samsung with the Vive and Gear respectively.

And now you can add Google into the mix.

The Daydream platform looks set to arrive with Android 7.0 in November, and for the first time VR feels like it might be on the cusp of a mainstream breakthrough.

The New Kid on the Block

Google has already dipped its toe into the world of Virtual Reality with the Cardboard VR viewer, but the Daydream platform represents its first real foray into combined VR hardware and software. The project is essentially Google's VR-enabled mobile platform, from which it will house content such as apps, videos, and games.

The latest Android OS, Nougat, was launched to support the forthcoming Daydream, rendering smartphones, headsets, and controllers compatible with the VR platform. Daydream-ready devices will ship with an Android VR mode, meaning users will be able to use VR versions of Google's native applications, such as Street View, Google Photos, Play Movies, and of course YouTube.

Accompanying those apps will be a host of content from a number of third-party developers, including the likes of EA, Ubisoft, Netflix, Hulu, HBO, and IMAX. Top US sports leagues like the NBA and Major League Baseball have also been drafted in to create content, while filmmakers and notable YouTubers will be recruited to produce exclusive immersive and engaging 360-degree video.

And when Daydream goes live, we will also see the launch of a number of new and improved devices, including Android phones, VR headsets, and controllers.

All of this points Google, Daydream, and Virtual Reality in general, in one direction.

Towards A Critical Mass

The Daydream platform could be the turning point we've been waiting for when it comes to the widespread adoption of VR technologies.

This is because Google has the capabilities and wherewithal to dominate mobile-based VR in much the same way online search has become synonymous with their brand.

Unlike many of the other major VR players, Google doesn't appear to be too focused on merely building and selling consoles or headsets. Rather, they wish to establish the Daydream platform as the quintessential Virtual Reality interface.

Google is sticking to its open-source approach with Daydream, releasing designs for its own Daydream View headset for others to copy. It would appear that, so long as the hardware is being used with the Daydream platform, Google isn't too bothered about who manufactures the headsets.

The potential for Daydream to take off like no other VR platform before it is rooted in the Android mobile OS. Android is easily the most popular, most widespread mobile OS on the planet, present on almost 80% of all smartphones.

This means that most modern smartphones running an up-to-date version of Android will be VR-ready; and when that's coupled with the more affordable compatible VR headsets (the Daydream View will retail at $79.00) it puts Virtual Reality within touching distance of a potentially massive audience.

So, is this why Daydream is the clear blue ocean? It's certainly part of it.

Think of the accessibility of Android as the ship. And what propels ships forward on the water?

The Daydream platform is a potential game changer for Virtual Reality, uniting a standard interface with affordable, accessible hardware and exclusive content.

But the possibilities do not just begin and end with entertainment for Daydream. As more and more people adopt VR technologies, and in particular Google's Daydream platform, there exists an opportunity to dominate a hitherto unconquered niche.

For instance, by drilling down into a specific scientific, technological or medical sector on Daydream, a business could carve out a reputation for themselves as a market leader, before anyone else has even thought about competing.

Psychologists have already used VR technologies in the field to enhance their more traditional treatment options. PTSD, anxiety, and depression have been treated via Virtual therapies. Meanwhile, medical professionals have used VR to practice complex surgical procedures and better prepare the next generation of doctors.

Product testing, health and safety training, architecture and interior design, fashion and retail, travel, and military applications; all of these have nuances and disciplines that can be better supported by VR.

The possibilities are nigh on endless, and Google's investment in VR will certainly smooth the way for widespread adoption across a whole host of professions.

You may not be familiar with Lucius Annaeus Seneca, or Seneca the Younger as he was otherwise known, but he was a renowned Roman philosopher, statesman, and dramatist.

Why are we bringing him up? Well, while he may not have been up-to-speed on all things VR, he did once write that "if one does not know to which port one is sailing, no wind is favorable."

This particular quote seems apt as we round off this article, as it's worth bearing in mind that setting sail on a metaphorical vast blue ocean without a destination in mind can be something of a recipe for disaster.

Yes, Google's Daydream platform is a new world just waiting to be conquered. But just as the many explorers and innovators before would have, you must plan carefully.

If you do, it could be plain sailing towards unprecedented VR success for you and your business.