Sex bloggers Alvin Tan and Vivian Lee have been charged and imprisoned without bail in Malaysia after they posted a photo offensive to Muslims on their Facebook page. They face up to eight years in prison.

The photo in question featured the duo eating pork stew, "bah kuh teh," while greeting fasting Muslims for Ramadan. 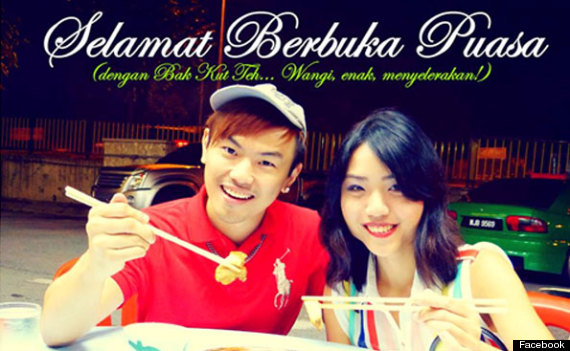 Pornography is illegal in both Malaysia and Singapore, where Tan used to be a law student at the National University of Singapore, though he was stripped of his ASEAN scholarship after the public outcry against their X-rated blog.

The Muslim-majority country defines sedition as actions that spread ill will among people of different races, and is considered a serious crime. Tan and Lee have been charged under:

a) Section 5 of the Film Censorship Act 2002 for publishing indecent photographs online between July 6 and 7. If found guilty they can be fined not less than RM10,000 or not more than RM50,000 and or imprisoned for not exceeding five years;

b) 298A Penal Code for promoting enmity between different groups of religion or race and doing acts prejudicial to maintaining harmony by publishing an offensive Ramadan greeting which carries a minimum jail term of two years or a maximum of five years; and

c) Section 4(1) (c) of the 1948 Sedition Act for posting seditious material through the offensive greeting which carries fine maximum fine of RM5,000.

Tan and Lee, 25 and 24 years old respectively, pleaded not guilty to the charges, but will be jailed without bail until their next court date on August 23. They apologized on their Youtube page soon after the incident, saying "We are recording this video to ask for forgiveness for offending Muslims in this holy month of Ramadan," but the authorities are taking their case very seriously, as it casts doubt on the value of free speech in the conservative countries.

Malaysian Prime Minister Najib Razak said on Wednesday, "The insolent and impudent act by the young couple who insulted Islam showed that freedom of expression and irresponsible opinion can jeopardise the community," according to The Star.

Though they now seem apologetic, their social media trail tells a more convoluted story. Their Facebook and Twitter pages have been shut down, but content was still quoted by news outlets before the pages were killed. They tweeted that their Facebook page had been shut down due to "strong negative feedback," and a cached copy of the page shows a sample of the outraged comments on the photo.

The couple next tweeted defiantly on Saturday, "You may shut us down now but we will be back and be stronger and better than ever. Enjoy your Ramadan for now," according to MSN.

The furor over the photo was heightened by a crime believed to be linked to the issue, according to Malaysia's attorney general, Abdul Gani Patail, who said that an ethnic Chinese man was abducted, stripped, and beaten by a group of men. They inked his chest with the words "I insulted the religion of Islam" in Malay before setting him free.

Patail says that Tan and Lee are being detained because "they have the potential to upload content that could stir public anger." On August 23, a court will decide their fate.

Alvin And Vivian Jailed: Malaysian Sex Bloggers Charged With Sedition For Inciting Religious Enmity With Ramadan Image
How Internet Is Restricted Around The World

1 / 7
North Korea
Internet use is extremely restricted with many of North Korea's 24 million people unable to get online. Some North Koreans can access an internal Intranet that connects to state media. Members of the elite, resident foreigners and visitors in certain hotels are allowed full access to the Internet.
AP