It was recently brought to my attention that my 4-year-old son was old enough to play T-ball with our local youth softball league. Wait? What? Really? They've got to be kidding.

He's spent only 48 months on this earth, and he's old enough for an organized sport? I would later learn that "organized" in regards to 4-year old T-ball is a generous word. However, yes, for organized T-ball Jack was, indeed, eligible, if questionably capable.

I spent a few weeks deciding whether I should sign him up. It seemed too early. By starting now, surely, he'd be worn out and washed up by 12. He'd then turn to drugs and by 16, I'd be shopping rehab facilities. T-ball having served as the gateway drug.

However, I was also well-aware that Jack's athletic gene pool was probably pretty shallow, so if he wanted to play, I better give him any head start he could get. So I drank the Kool-Aid and hopped on the the ride to nowhere.

I soon learned that there would be a T-ball draft. Yep. This is a real situation. Coaches actually get together and haggle for players, half of whom can't even wipe their own butts, my son among them.

Jack was drafted to the Devil Rays, and his first practice was scheduled.

That practice. The Devil Rays looked like castaways on the island of misfit toys. And the poor well-intended coach handed Jack a bat -- on purpose -- not knowing that Jack would rather swing the bat at his teammates like a sword than try and hit the ball.

Watching a group of 4-year-old boys play their first game is like watching tiny aliens arrive on planet earth. As a majority, they have no clue what's happening or why. And if you're Jack, you really don't care. Here's what Jack does care about during his T-ball game:

1. Making a perfect dirt angel while he mans second base

2. Licking the inside of his hat

4. Picking grass out of the outfield, running it into the infield and throwing it at this teammates. The ball? Oh that probably just whizzed on by him. He'd rather lick his hat.

Jack likes to hit the ball off the tee and then hurl the bat -- usually the bat goes farther than the ball. He then likes to gallop, skip or run backwards to first base. Even with his theatrics, he usually makes it on base courtesy of the the absurdity and hilarity of 4 year old T-ball.

It's like the wild wild west out on that field. Balls flying, bats swinging. Kids running in all directions. No rules apply. If Jack decides he'd rather play pitcher, he goes and shoves the pitcher off the mound. If a player is running to third base and Jack doesn't like the look of him, he blocks him like a linebacker.

There are no rules in Jack's wild wild west T-ball show except one: You always slide home. Running home? Slide! Going up to the plate to bat? Slide!! And why throw the ball home and make the out when you can run it in and... slide!

We bring Jack home looking like he got bombed with dirt. But he's really bombed on sugar. After the game comes Jack's favorite part of playing T-ball -- a trip to the concession stand. God bless the concession stand for feeding my family dinner (and dessert!) four nights a week.

Not surprisingly, the Devil Rays are 0-10. Which is horrible, except if you're Jack. Win? Lose? It doesn't matter to him. That's the best part of 4-year-old T-ball. The scoreboard, for these days, for these kids, doesn't exist. This won't always be true. Some day, in the near future, there will be winners, there will be losers but this summer, out on the field, all that matters is sliding home. 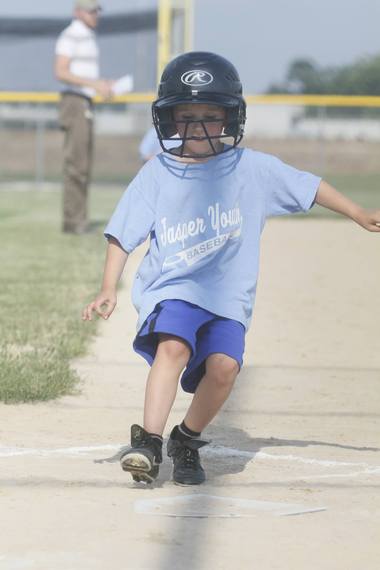 More:
softballMotherhoodParenting Parentst-ball
Newsletter Sign Up
Raise the kind of person you'd like to know
Subscribe to our parenting newsletter.
Successfully Subscribed!
Realness delivered to your inbox