Alyssa Kramer wanted to see just how far men would go for a good time.

So the Philadelphia blogger created an outrageous online dating profile for her alias, "Marla," a fictitious 26-year-old from Queens, New York, and wrote about her experiment for Slacktory.

Kramer wrote what she considered to be the most ridiculous descriptions of Marla's interests and attributes, including a line that detailed her body type as "used up." She also uploaded a photo that showed only her hair and shoulder -- features she didn't consider particularly sexual.

SCROLL FOR PHOTOS OF "MARLA'S" PROFILE AND CONVERSATIONS

As Jezebel points out, Kramer went into the project with a few rules: Don't make the first move, don't further conversations and don't lead guys on.

Despite her best attempts to dispel men, Kramer received a series of rather amusing responses from potential suitors still interested in chatting. Apparently even talk about constipation (!), syphilis (!!) and incest (!!!) couldn't keep these dudes away.

Perhaps the moral of Kramer's story is that there's someone for everyone... "as long as you're willing to settle for a guy who might be into some equally weird shit," Jezebel's Erin Gloria Ryan notes.

Just ask one woman whose date confessed to listing all his Match.com dates on spreadsheet or a Philadelphia woman who received a detailed survey from an ex-suitor, asking her to rank his appearance, manners and masculinity.

Despite the popularity of online dating sites, a recent study suggests that finding love on the Internet is no more effective than "the old-fashioned" way.

The report, published in the Feb. 2 issue of Psychological Science in the Public Interest notes that the scientific algorithms popular dating sites tout aren't really that useful in determining the perfect match, CBS reports.

Take Trish and David Palmer, who married after they met playing "Word With Friends."

Click through the slideshow below to see Marla's conversations with potential suitors: 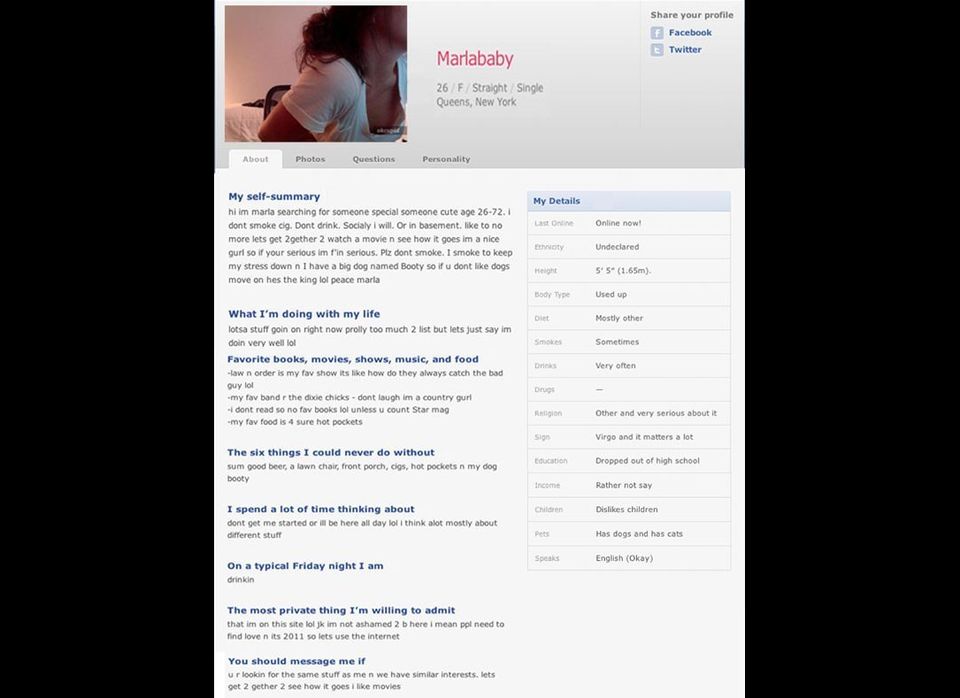