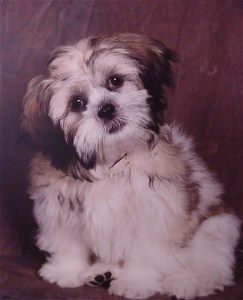 Peter, my precious little Shih Tzu puppy, was brown and white with enormous brown eyes; his tail never stopped wagging. I was so happy I'd chosen him. Actually, I didn't choose Peter. He chose me. Like the Mona Lisa, his eyes followed me everywhere I went in the pet store.

I left that place and went to another, but there were no puppies as beseeching as Peter, so I returned to the first store. Peter's eyes locked on to me again the instant I entered. So that settled that. He became mine.

Peter was the cutest puppy you ever saw. And that's not just my opinion. I was walking him one day when a lady stopped her car and stuck her head out the window. She said -- and I quote -- "That's the cutest puppy I ever saw!" So that made at least two of us. Plus Ed, my beloved Romanian soul mate of 30 years, loved Peter just as much as I did.

Ten years later, beginning in 2005 when Ed developed Alzheimer's, I often took Peter to visit him in the nursing home. One day when we arrived Ed was dozing in his wheelchair. 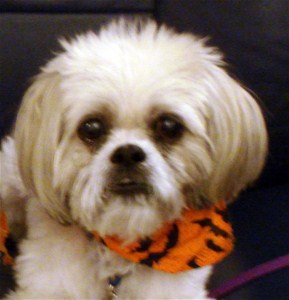 "Hi, Ed. Here we are," I said, certain my voice was loud enough to awaken him.

He lifted his head and saw us.

Ed didn't even look at me.

"Hi, Mar-r-rie," he said, finally turning his attention to me. "Can I hold Pe-tair?"

I put Peter on Ed's lap and expected him to jump down immediately and come to me as he had done every single time I'd taken him the whole 17 months Ed had lived in the facility. In fact, even if I went to Ed's bathroom Peter insisted on going in with me.

Ed started stroking him slowly, his hand starting on Peter's head and moving down his back all the way to his tail. Then back to his head again and slowly down his back once more. I sat down in the rocking chair, waiting for Peter to squirm, jump down and run to me as he had done a hundred times before.

Peter just stretched out on Ed's lap, closed those enormous brown eyes, and rested his chin on Ed's arm.

Mary, the housekeeper came in and emptied the waste basket.

"I have to go on to the next room now, Edward," she said when she finished.

He thanked her, kissed her hand three times -- as was his habit -- and told her how beautiful she was. He told all the female staff members and all of his visitors (even men) how beautiful they were.

After Mary left, Peter put his chin back on Ed's arm, and Ed resumed stroking him.

"Does he like it when I 'pad' him?" Ed asked, looking at me expectantly.

I watched them while I rocked. It was almost like meditating. But I wondered what was making Peter stay on Ed's lap. He'd never done that before. It worried me.

What does Peter know that I don't?

As I was driving home I remembered a story about a cat in a nursing home who went to sit beside patients just before they died. I was frightened and tried to put that thought out of my mind. And I tried to forget how Peter had stayed on Ed's lap for the whole visit.

To read more about Ed, you can order my award-winning book, "Come Back Early Today: A Memoir of Love, Alzheimer's and Joy," and visit my website, which has a wealth of information about Alzheimer's caregiving. A slightly different version of this post was published on the Alzheimer's Reading Room.