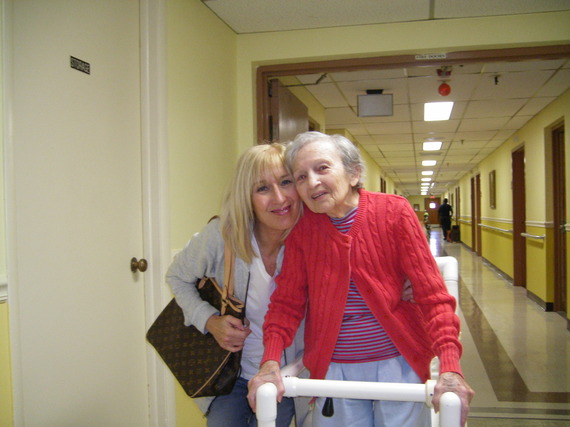 Alzheimer's -- Could There Be A Silver Lining?

Since my mother lives in Florida and I reside in New York it had been a while since my husband and I had visited her. What made this trip extra special was the fact that we would be seeing her every day for one whole month. This was not one of my usual quick three-day visits. It was one we did the year before with both of us knowing how meaningful and rewarding it would be.

Upon arriving at the nursing home I nervously asked my husband to sign in as we proceeded to the second floor. Although many of the patients on this floor have Alzheimer's it is not a locked unit. Fortunately for us mom has never been one of the wanderers. She has never been on any medication for agitation, depression or any other ailments. Except for Alzheimer's and macular degeneration, at the age of, 91 she is in "perfect" health.

As I exited from the elevator I quickly hurried to the nurse's station to introduce myself to a new nurse whom I never met, and to find out where my mom was. Was she walking around the second floor in her Merry Walker or was she still in bed? I was told that she was "off and running". I circled the floor and found mom in a corridor all alone. As I observed her I noticed that she was walking much slower. The good news was that she was still mobile.

I went to her and softly kissed her cheek as my eyes filled with tears. Mom was happy to see "someone" yet she had no idea that I was her daughter. It appeared that she was slipping further into the disease. The first thing she said to me after I kissed her was "kill me". I asked her what she said as she quickly corrected herself and said "kiss me." I wondered if this was a Freudian slip, did she actually say it in a moment of clarity, or was this something that she might have really wished for?

On day two mom, as soon as she saw us, said that she was very tired yet that she also felt happy. Was there some recollection to who I was? Was it the sound of my voice, my touch on her skin, or were my kisses different than the ones she receives from the nurses and aides?

As we went into a sitting room that we nicknamed "the living room" we took mom out of her chair and sat down together on a couch. Mom held onto my hand and squeezed tightly, as if she never wanted to let go. The way she kept smiling at me made me want to believe that she was aware that I was her daughter.

We played some songs from YouTube that I knew she was once familiar with. She became alive as she sang along to Frank Sinatra's "My Way" and "New York, New York". It never ceases to amaze me how much music cheers the soul of those who suffer from this disease. It is the best "healing" medication there is. The magic of music somehow opens up their world; a world that no longer exits.

The following day mom refused to get out of bed. We found her laying in a fetal position looking, should I say, lost and trapped into her own world. She hardly spoke and refused to get up. I once again held her hand and was surprised and a little relieved when she threw me a kiss and told me that she loved me. It was a difficult visit just seeing her trapped and lost in her own world.

Unfortunately mom cannot describe or tell us what might be bothering her. Maybe she didn't sleep last night or maybe she was not feeling well.

On day four I was feeling anxious and filled with anticipation on how we would find mom. It turned out to be a day filled with miracles. Mom was up and about in her Merry Walker. As we approached her she told us that she was looking all over for us. We went to "hang out" in the living room and seeing how lucid mom was, I asked her to spell some words. This was something that she did well. We ambitiously asked her to spell orange, purple, yellow, sunshine, apple, and with amazement, she quickly spelt each word correctly.

This disease remains such a mystery to me. I have witnessed things with my mother's mind and after 13 years with Alzheimer's I am still baffled. Since entering the nursing home why does she run around searching for her parents? She speaks about them in such present tense and only wants to go home believing that they are worried and waiting for her. She repeats this same scenario almost every day.

I wonder how she can still spell when spelling takes a memory and how can hearing music bring back the words that have long been forgotten? How can she be lucid one moment and then disappear into her world the next?

Yes, Alzheimer's is one of the cruelest disease's that eventually takes your life. Some people live with it for years and others succumb rather quickly. My mom has had Alzheimer's for many years and if there could be any silver lining then I have found one. Mom cannot remember anything in her life that caused her any pain or suffering. She does not really understand what has happened to her and if she does the thought passes through her brain so quickly that she can "peacefully" go back into the world that she now lives in.

As her daughter first, and her caregiver second, I believe that I am the one that feels her pain; yet I too have been so fortunate to have been able to live in the world of being thankful & grateful for whatever mom and I still can share.

My Mom My Hero