Ed, my Romanian soul mate, had Alzheimer's. And I knew I'd never be able to accept it.

It was true that he'd been wonderfully transformed by the medications the doctor had prescribed for his depression, obsessive compulsiveness and delusions. But he was still demented. It was so bad I couldn't have a meaningful two-way exchange with him. He couldn't advise me about my problems or praise me for my successes as he'd always done. He couldn't provide emotional support and be that solid rock who had always been there for me. I often felt overcome by the loss of that great man I'd loved so deeply for over thirty years.

One morning before going to the nursing home to visit him, I stopped by Walgreens to buy some shampoo. To get the shampoo, I had to pass the stuffed animal section. I had no idea why, but those sweet little playthings caught my eye and brought Ed to mind.

Would he like a stuffed animal? He was childlike at times.

I immediately told myself I was crazy and that he'd feel insulted and become irate if I gave him a stuffed animal. But finally, on a whim and against my better judgment, I decided to buy one. I chose a miniature yellow chick. When you pressed a little red button on its chest it said "peep, peep, peep."

On the way to the nursing home, I kept wondering what a 92-year-old man was going to do with a stuffed animal that peeped. That former erudite scholar, lawyer, and professor of French? The man who'd had such a brilliant mind?

I arrived and found Ed sitting in his rocking chair looking at the newspaper, which he was holding upside down. When I greeted him, he exclaimed how delighted he was to see me. I sat down beside him, feeling both anxious and silly.

"I brought you a present today, Ed," I said, summoning all my courage.

I held the chick for him to see, then handed it to him. I knew in my gut he was going to be angry so I braced myself for the onslaught, but at first he didn't react at all. He just sat there looking at the thing. I wondered what was going on in his mind. His facial expression was blank.

I didn't have to wait much longer. His reaction shocked me, to say the least. His eyes sparkled and a look of wonder came over his face. He gazed at me as though I'd just given him something magical.

I showed him how to push the little red button. The chick went "peep, peep, peep." He looked at me again as though he'd just witnessed a miracle. His eyes shone and he started laughing and pushing the button repeatedly, putting the chick to his ear each time. Then he held it by its little feet with his left hand and began stroking its back with his shaky right hand.

"Mar-r-rie, I can't enough thank you," he said with his usual Romanian accent and flawed syntax, smiling radiantly as he continued petting the chick. "You help me so much and now this wonderful puppy you brought me."

He called all stuffed animals 'puppies.' 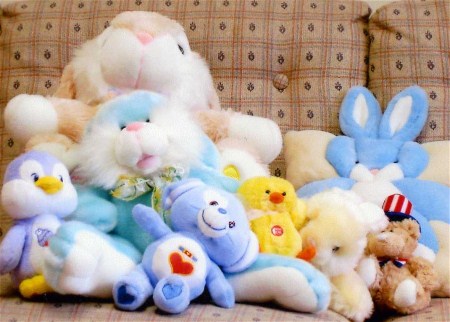 "And I r-r-really meant it from my heart. It's not just words from my mouth," he said, using that charming phrase he used so often.

"I think you should give it a name," I said.

"The Lee-tle Yellow One!" he announced with glee. "He is wonderful. I am so happy to have him with me here."

"I'm coming to visit you again tomorrow," I said, changing the subject

"Oh, I'm delighted!" he said. And then he asked, "Do you know who else is delighted?"

"The Lee-tle Yellow One!" he said.

It was clear he was aware and proud he'd said something amusing.

I was always astonished when he had those moments of lucidity. They were even more touching when he was humorous.

Hearing the excitement in his voice, I decided to take a chance and asked, "Would you like to have a bunny rabbit, too?"

"Oh, yes! I would love a bunny r-r-rabbit to have because he would be for the Lee-tle Yellow One a companion."

So I decided that if stuffed animals gave him so much pleasure, maybe I'd keep bringing him little child-like presents and maybe even start interacting with him as though he were a child. It wasn't the kind of interaction I'd been wanting all those months, but I guessed it would be better than sitting in silence, feeling dejected and unloved during my visits.

On my way home, I felt joy that I'd brought him so much joy with the little chick. I later realized that when I'd experienced his joy at that tiny stuffed animal, my heart began to be transformed. Gradually, my need and desire for my 'old Ed' began melting away as I realized that I could bring such happiness to my 'new Ed.' The man who had lost so much was in a state of child-like bliss thanks to my small gift. His fervent gratitude for the many little stuffed animals I later took him and the fun he had playing with them all made me feel joyous, too.

I eventually became aware that little by little and without even noticing, I had accepted his illness and I had found new ways to relate to him, ways that were genuinely satisfying for both of us. Just seeing him smile and hearing him laugh had become more than enough to make up for losing our previous relationship. My heart had changed forever. Our love had adapted and endured, despite that last and most daunting obstacle it would ever face.

Note: This story was awarded Honorable Mention in the 2012 Writers-Editors Network International Writing Competition. For more stories about Ed you can read my book, Come Back Early Today: A Memoir of Love, Alzheimer's and Joy and visit my website. A slightly different version of this post was published on the Alzheimer's Reading Room.