People caring for those with Alzheimer's have long known that music is special to these individuals. It won't stop or slow the progression of their disease, but it can be of significant benefit to them.

Many people with Alzheimer's can sing songs, including most or even all of the lyrics, long after their Alzheimer's has progressed beyond the point of recognizing loved ones, dressing themselves or even remembering what happened five minutes earlier.

After listening to music some are clearly more calm, in a better mood and more outgoing than before, which improves the quality of life for both the patient and the caregiver. Finally, music has been found to help those with dementia retrieve some memories their caregivers had assumed were lost forever.

There are a few simple recommendations for using music therapeutically with people who have Alzheimer's:

Play Music for the Person

Live music can be provided in several ways. Early-stage people may be taken out to concerts. You could also have a musician come to your home. 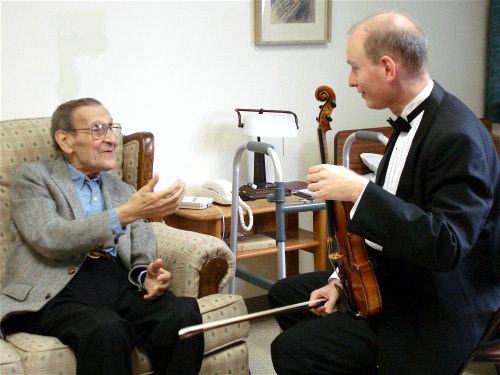 Ed and a violinist I hired to play for him

Nursing homes typically have an activity staff member who regularly performs for their residents. They can also arrange to have soloists or small ensembles come to the facility. Further, whether at home or in a facility, caregivers can sing to patients.

Having the person listen to recorded music is somewhat less engaging than listening to live music because, unlike live music, it doesn't provide any visual stimulation. It does have the advantage, however, of allowing the patient to listen to a piece over and over and at any time rather than just when performers are present. Some caregivers these days are loading up iPods with the type of music their loved ones cherished the most before they developed the disease. Even background music can bring comfort, calm and pleasure to people with Alzheimer's.

Arrange for Musical Experiences in Which the Person Can Participate

Getting your loved one to participate in musical activities is more engaging than having them just listen. This can be conducted in various ways. In facilities, the most common type of musical participation is sing-alongs. Typically led by activities staff, these sessions often catch the attention of even the residents in the most advanced stages of the disease. It's surprising the number of lyrics they can remember given their state of cognitive decline. For those living at home, sing-alongs with family and friends can be arranged, bringing enjoyment to all.

People with Alzheimer's in any setting can be given drums, tambourines or other simple percussion instruments to "play." These require no musical talent or experience and can bring smiles to faces that were previously blank.

Another approach is to have loved ones who played instruments before they developed dementia try to play them again. Some, especially those with early dementia, may be still be capable of performing. If they can play they will probably get quite a bit of enjoyment from it.

Use Music Appropriate for the Person

The cardinal rule when using music with someone with Alzheimer's is to always observe how they are reacting to the music and stop it immediately if it seems to be having a negative effect.

You can effectively use whatever type of music the person liked most before developing cognitive impairment. An alternative is to use "golden oldies." A third consideration is that people with dementia will generally react most favorably to music that was popular when they were in their teenage years or early 20s.

To avoid over-stimulating or making the person agitated you should not use music that is loud, dissonant or frenetic-sounding. Also be careful to avoid sad music, such as sad love songs, or selections that individuals may connect to some specific sad experience in their past, such as music played at the funeral of a loved one or the "favorite song" they had with a deceased mate.

Following these simple guidelines may give you and your family new ways to connect, interact and bring comfort and joy to your loved one. In fact with people with advanced Alzheimer's you may find it's one of the very few things to which they'll really respond.

I personally used to listen to music regularly with my 92-year-old Romanian soul mate and he always enjoyed it. His face would light up and he would move in time with the music. Sometimes he would hum along.

Two instances in particular stand out. One was when I pretended to be conducting the music, emulating the type of "wild" conductor he had always enjoyed so much. The other was when I had a classical violinist show up in a tux to play a special concert just for him in his room in the nursing home. Both events brought him great joy and consequently brought joy to me as well.

Can any of you out there share stories of your own experiences using music to connect and bring pleasure, comfort, or calm to your loved one?

Note: To read more about how I used music with Ed you can read my book, Come Back Early Today: A Memoir of Love, Alzheimer's and Joy, and visit my website, which contains a wealth of advice about Alzheimer's caregiving. A slightly different version of this post was published on the Alzheimer's Reading Room.