I'm writing to tell you about a most unusual person with Alzheimer's. You're going to think I'm crazy. You really are. But to tell you the complete truth, I have say that Ed, my beloved Romanian soul mate, became more and more contented as his Alzheimer's developed. More contented than he ever was before.

Ed was in his late 80's when he began experiencing cognitive decline. He knew something was wrong. He was endlessly frustrated and afraid of his early symptoms. What's more, he spent a lot of time thinking about death.

He became angry and depressed. He drank to excess -- starting at noon and continuing all day and half the night. He drank vodka, and he didn't drink it from shot glasses. He filled a regular water glass half full every time he wanted a drink. And he wanted a lot of drinks.

He stayed up until three in the morning and he slept until noon. Then, as soon as he got up, he started drinking again. Was he an alcoholic? No. He just drank a lot. And try as I did, I couldn't get him to stop. I had a full-time job and he'd arranged to have the vodka delivered to his apartment when I wasn't there.

I couldn't take care of him at a certain point and we fought constantly about him going to a nursing home. He said he'd die first. He always said that. But eventually he became so impaired he forgot his opposition to the idea and finally agreed.

As his Alzheimer's progressed, however, he slowly began to be transformed. As the months went by, he became a new man. He became even sweeter, more loving and more loveable than the man I'd known years before. He was tremendously adorable and contented.

He loved the staff at the nursing home and thanked them repeatedly when they did anything for him -- and I mean anything. When the cleaning lady came in to empty his trash basket he thanked her over and over. Then he kissed her hand and told her how beautiful she was and how lucky he was to have her help.

He was also contented with his financial situation. He once told me confidentially, "The American government is paying for my nursing home stay!" I just let him continue thinking that.

His previous depression gradually went away and he became a joy to be with. Everyone at the nursing home loved him dearly and he loved them as much. Once, one of the young girls who worked in the kitchen asked him, "Where were you when I was looking for a husband?" He and I laughed a lot about that.

He no longer worried about death because he didn't have the capacity to think about the future. And he didn't stew over any unpleasant things that happened to him because he forgot them all very promptly.

During the earliest years of his dementia he had been quite verbally aggressive with me and I didn't know how much longer I could take it. But as his condition advanced he became a true joy for everyone, and he himself was very contented -- more so than I'd ever seen him. He knew and experienced joy even on the last day of his life.

I have often wondered -- what if Ed never had Alzheimer's? 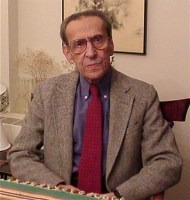 Note: For more about Ed and our relationship you can read my book, Come Back Early Today: A Memoir of Love, Alzheimer' and Joy, and visit my website, which also contains a wealth of advice for caregivers. A slightly different version of this story was previously published on the Alzheimer's Reading Room.