As a gay man, the stereotype is that I'm fashionable. Still, if I had the option -- and the technology existed -- I would only wear a mosaic that tastefully covered my naughty bits. This way, I wouldn't have to decide what to wear when walking my dog, visiting the mailroom of my apartment building or waiting for my Uber to drive me to a lunch meeting.

Admittedly, there are times that fashion interests me. After binge watching several seasons of Real Housewives shows on Bravo, I became unhealthily obsessed with zebra print. I painted a giant canvas with stripes, purchased printed sheets and even ordered a tiny zebra stapler. When I finally unveiled my new studio apartment to my friends, they gasped in wonder. "This looks like a drag queen den!" shouted one of them. I had never been so honored. 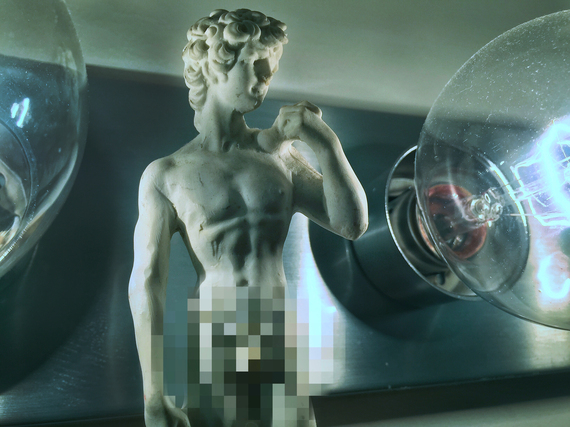 Recently, I've strayed from the animal print and purchased couture, slightly inspired by my fashionable boyfriend. This, unfortunately, also led me to committing a gay fashion faux pas: I ordered a Dolce & Gabbana shirt. I, being the ever-frugal shopper, hopped on the discounted garment only to discover, days later, that there was a boycott on the brand.

"Elton John told me not to wear this!" I huffed to my boyfriend. Evidently, one of the designers scoffed at gays who opted for in vitro fertilization. Rightfully so, Elton John -- the father of two children born via this process -- was pissed.

Suddenly, I felt motivated by Elton to boycott the brand. I felt like the gay community got enough flack, let alone from a designer who raked in mountains of our hard-earned cash. However, with a no-return policy on discounted items, I didn't know what to do with the shirt. I imagined Elton, high on a balcony, tossing out a continuous stream of shimmering D&G ascots and white capris onto his emerald lawn. Once he left from sight, his waitstaff would rush onto the field, fervently collecting the garments to sell on eBay. As I looked at my new Dolce & Gabbana shirt, feeling its soft fabric between my fingertips, I knew that I couldn't bring myself to toss it out the window. Thus, I opted to shove the thing deep in a drawer until an official apology was issued.

Once the dust settled, and the designer delivered a light apology, I thought that the coast was clear for gays to wear what we wanted again. Then, Giorgio Armani spoke out in a Sunday Times interview. He stated that a homosexual man "does not need to dress homosexual." Again, I felt offended -- and perplexed. What does a homosexual dress like? I'm gay, so does that make the v-neck I'm wearing also gay? Is it a problem that the v-neck is purple? Is purple a homosexual color?

Perhaps the fashion world is attempting to tell gay men something. Have we been living our stereotypically fashionable lives in a very unfashionable way? After much confusion, I decided to stop feeling angry and to discover the truth for myself. I drove to the nearest high-end mall, visiting the Emporio Armani for answers. Inside of the mostly empty store, save for one customer -- a thin, inebriated man in a Burberry scarf, listlessly petting a shaved Pomeranian -- I perused their collection to see which clothes were considered appropriate by one of the world's leading creators of fashion.

Shortly after I inspected a violet silk sweater -- officially making purple okay-for-gays again -- a clerk asked if she could assist me. I told her about my mission, and she nodded with a thin-lipped smile. Then she pointed me toward her recommendation, an $800 neoprene poncho located on a nearby rack.

"This isn't gay?" I asked, feeling the poncho's squishy fibers between my thumb and index finger. When she shook her head, I asked, just to clarify: "What about lesbian; is it lesbian?" This time, she vocalized, no.

Though the clerk was unhappy that I didn't purchase anything, I left with a little more understanding. Perhaps, Armani is trying to make homosexuals more fashionable by buying his brand. Or, perchance, he's just another fashionisto with a terrible choice of words. Either way, I think I'll let this one go; life might be a little too short to add this to my list of brands I'm that boycotting. Plus, I have a very non-homosexual Armani mesh tank top that's just dying for me to wear tonight.