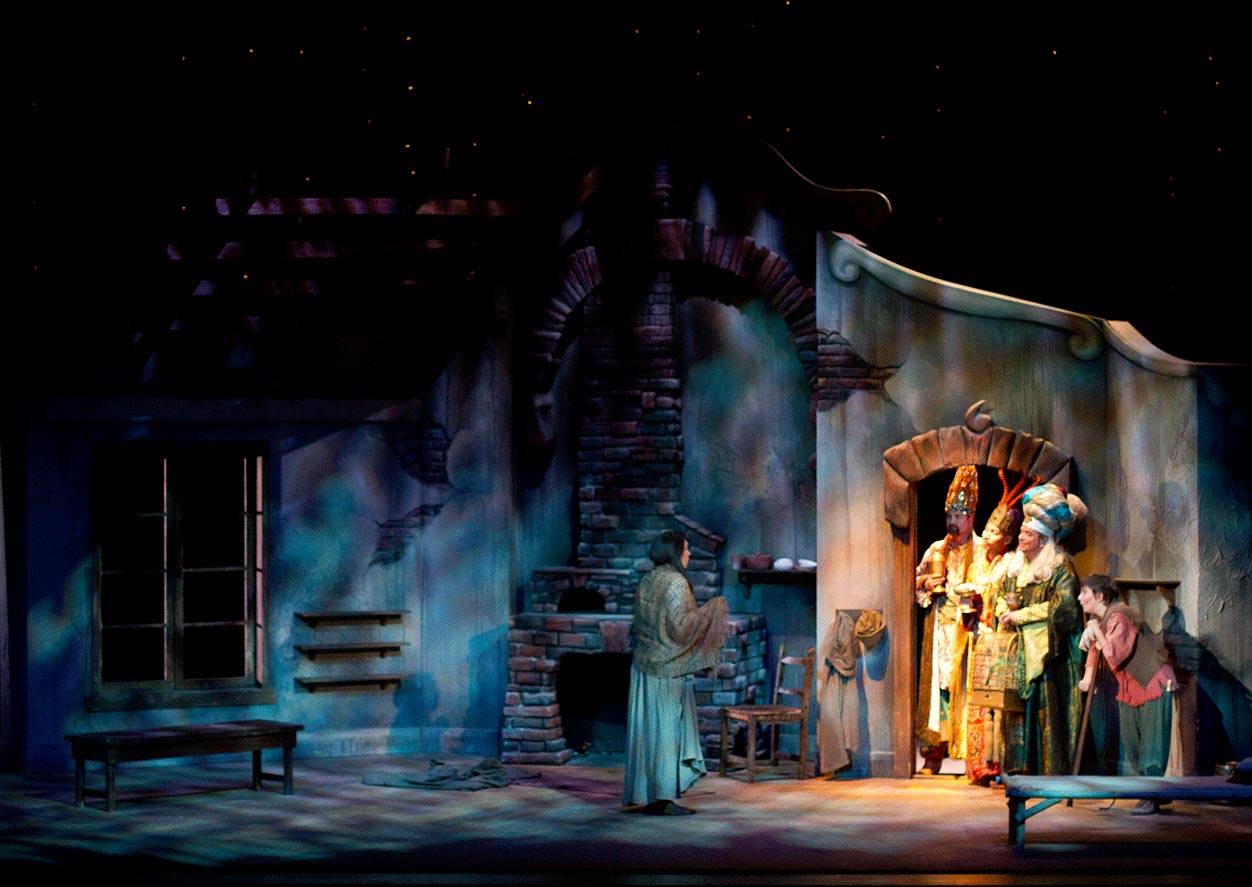 If you know Intimate Opera of Pasadena, it is probably from its earlier iteration as a kind of singers' collective that for a decade or more presented excerpts of operas at a bookstore-cum-café in Pasadena's Old Town district. In this capacity they had proclaimed themselves as unique in Southern California.

In their latest outing, however, they are seeking to change the game by mounting their first full production, Gian Carlo Menotti's 1951 television opera, Amahl and the Night Visitors, five performances of which were given at the venerable but underutilized Pasadena Playhouse, December 16-19. I caught the opening night of the grander, less intimate future-to-be.

The challenge facing the company is similar to that of child actress Shirley Temple when she reached the awkward teen years; she had to become a starlet after having been a star. Intimate Opera's first production was mostly successful, despite some wrinkles here and there. The company has made a big step forward, but one that will subject it to comparisons with larger, more seasoned opera companies.

Amahl is probably as good a choice as any for a first production. It is short, accessible, easily staged, vocally undemanding, and has a built-in appeal for the holiday season. Whether the work itself is worthy of a continuing life is a matter of individual taste. Its central character, the crippled Amahl, is just a little too reminiscent of Charles Dickens' Tiny Tim, and the story's dénouement has the kind of simplicity that wants to be called simple truth.

The production was handsome in a traditional way. John Iacovelli's pictorial unit set delineates the interior of a mother and child's humble home somewhere in the path of the Magi's route to meet and greet a baby of reputed metaphysical promise. Kate Bergh's costumes were appropriately drab for the home's occupants and their neighbors and extravagantly opulent for the three Magi who arrive unexpectedly, seeking a night's shelter.

An added bonus for the production was the Playhouse's rococo interior, which became a natural extension of the fairy-tale atmosphere suggested by the Magi's colorful gowns, particularly in the sensitive lighting of Jared A. Sayeg. (Think of the jewel-box theater in Ingmar Bergman's Magic Flute.)

Just as important, the hall's fine acoustics easily projected the musical contributions of the slender orchestra led by Jeffrey Bernstein, offering the singers a lovely pillow of lyricism to decorate. Conny Mathot's choreography was well executed by dancer Stephanie Hullar and her male counterparts.

(Nice as it is, the theater was too cold on opening night, and there needs to be a closer collaboration between the Playhouse's staff and the IOP for smooth operations and audience comfort.)

Stephanie Vlahos' staging was efficient and the performances she elicited effective, particularly from old pros at the LA Opera like Greg Fedderly, Cedric Berry, and Robin Buck, who traded in their usual comprimario assignments at LAO for the more prominent Magi roles here. Fedderly's hard-of-hearing Kaspar in particular gave him the opportunity, fully seized upon, for droll comic touches.

The Amahl of Caleb Glickman was clear-voiced and likable, if not yet particularly memorable on opening night. LA Opera regular and native Angelino Suzanna Guzmán handled her transformation from a scolding to a desperate mother sensitively. Menotti's protracted haggle between mother and son over his reporting on the arrival of the mysterious visitors remains as tedious as in other productions of memory.

The variable articulation of the singers made the vocal dialogue, in simple English, difficult to understand, as from Guzmán's otherwise beautiful and darkly produced mezzo. Even in an opera as straightforward as this, supertitles are advisable. They will become more necessary when IOP produces Madame Butterfly next spring and Rigoletto the year after.

Taking on Amahl in a community setting with no competition from another opera company is a safer risk than the likes of Puccini and Verdi operas, which are regularly produced at grander houses nearby. IOP will of necessity be competing with those larger houses. One of the ways to differentiate itself is to cultivate a loyal, local following.

In that regard, and given the obvious attraction of Amahl for children during the holiday season, it was concerning to see the already smallish Playhouse half empty on opening night, its seats mostly occupied by senior citizens. Where were the children? This was a lost opportunity in marketing. The viability of a producing opera company involves more than just putting on a show. If seats are not sold they should be given away, if for no other reasons than to generate goodwill and cultivate tomorrow's audiences.

Bookending the opera proper had been a prologue and postlude by actor Malcolm McDowell. He opened with a stentorian reading of Dylan Thomas' A Child's Christmas in Wales in the period costume and drawing room of an early twentieth century Welsh gentleman. McDowell returned silently to the stage after the opera's conclusion to peer out of the same window where his earlier reading had helped conjure the tale. The play-within-a-play conceit worked well enough.

All in all, it was a good start on a long journey of reinvention for Intimate Opera of Pasadena. We wish them well. As Tiny Tim might have said, "May God bless them, everyone."

Above photo: Jared A. Sayeg
Rodney Punt can be reached at Rodney@artspacifica.net