Novelist Amanda Filipacchi comes from a beautiful family. Her mother was a Ford model, and she describes the other members of her family -- the non-models -- as “gorgeous.” Perhaps, she suggested in a recent phone conversation with HuffPost Books, that’s why she’s so interested in the concept of beauty and the sway it holds in our society. Despite her early association with so much beauty, she says, “I’ve been disappointed in my life noticing how important beauty is in relationships in finding love. It puzzles me, I don’t quite understand it.”

Filipacchi’s new novel, The Unfortunate Importance of Beauty, makes that interest just as explicit as the title. The author, whose previous novels, Nude Men, Vapor and Love Creeps, earned her a reputation as a gifted comic surrealist, has long shown an interest in the dynamics of desire. In Love Creeps, for example, a woman feels envious of the purpose and fulfillment her stalker finds in desiring her, so she decides to become a stalker herself. In her latest novel, the troublesome relationships between desire and beauty are placed into exaggerated focus.

“I’ve been disappointed in my life noticing how important beauty is in relationships in finding love. It puzzles me, I don’t quite understand it.”
“It wasn’t my intention to really write a whole book about beauty, but then it just sort of grew, it just became bigger,” says Filipacchi. The novel, which centers on friends Barb and Lily -- who are, respectively, very gorgeous and very ugly -- and their search for meaningful love, uses their extreme contrast in appearance to tease apart the ways physical attraction can confound our search for love. Barb, suspicious of men’s motives due to her overwhelming loveliness, won’t date a man who doesn’t fall for her while she’s wearing her daily disguise: a fat suit, a grey wig, and glasses. Lily, a prodigiously talented pianist, resorts to using her magical music to beautify herself in hopes of making her long-time crush fall for her. While Barb feels disgusted by any romantic interest rooted in physical attraction, Lily devotes every moment to the hope of creating even a false moment of physical desire to spark a relationship.

In a magnified way, this gulf reflects a paradox about our own common relationship truisms; we want to be loved for our real selves, not for our looks -- but who among us wants to be loved despite our looks? As Filipacchi would argue, for (straight) women at least, it’s a false choice anyway: Men will not love us despite our looks. “The whole system is unfortunate,” says Filipacchi matter-of-factly. “It’s just sad and unfair that unattractive people don’t get as much romantic interest. And then the ones who are attractive get romantic interest that’s probably not of very high quality.”

"Filipacchi militates against the homogeneity of what’s considered desirable in today’s world."
In the darkly humorous modern fairy tale that is The Unfortunate Importance of Beauty, happy endings are possible for the too-beautiful and the too-ugly alike, but Filipacchi seems less optimistic about the real world. “No matter how much we complain, no matter how many books are written about it and how persuasive they are, I doubt they’re going to make any difference, because it’s so ingrained in our nature,” she explains. “But I still think some effort could be put into being more open-minded and looking for beauty in people, looking for other aspects to find beautiful, like the way they move. There are so many aspects that can be beautiful.”

Her bluntness in separating the beautiful from the ugly can be uncomfortable in a feminist landscape of Dove soap ad campaigns and exhortations for all women to find their beauty. In her mind, though, it’s just realistic. There’s an objective element to what we consider beautiful and what we consider ugly, and most of us have an idea of whether we’re pretty, average or hideous, despite what our well-meaning friends may protest.

The Unfortunate Importance of Beauty refuses to gloss over these real differences in conventional physical attractiveness women grapple with in the world. Even a makeover can’t help Lily, whose ugly features are somehow only highlighted by the use of cosmetics. Instead, Filipacchi militates against the homogeneity of what’s considered desirable in today’s world. “I wish it were a little bit more actually in the eye of the beholder,” she says. “Why can so few people see beauty in ugliness? I’m struck sometimes by that.” She also points to deeper qualities such as creativity or talent as another potential foundation for love, and yet: “How often do men fall in love with women for their talent? I don’t hear of that often, if ever! It’s usually just her looks.” 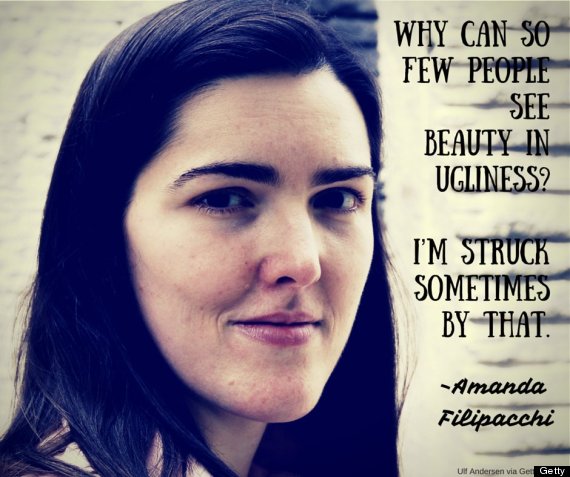