An Italian court has found Amanda Knox guilty of murder in her latest trial on Thursday, ABC reports.

This is the third trial for Knox and her Italian ex-boyfriend, Rafaelle Sollecito, in the 2007 murder of Knox's British roommate, Meredith Kercher. An Italian court found Knox and Sollecito guilty in 2009, but the pair was acquitted in 2011 on appeal after spending four years in jail.

Knox returned to the Seattle area to resume her studies until Italy's highest court struck down the appellate decision in March 2013.

As USA Today notes, the Knox saga has grabbed headlines around the world, with the University of Washington student being portrayed "both as a she-devil bent on sexual adventure and as a naif caught up in Italy's Byzantine justice system."

With the conviction, Knox and Sollecito's case will return to the supreme court. If the verdict is upheld, Italy could seek to have Knox extradited in order to serve her sentence. This process could take months, and according to legal experts, the U.S. might challenge extradition on the basis of "double jeopardy," a defense that forbids a defendant from being tried again for the same crime after an acquittal.

An appeals court in Florence on Thursday upheld the guilty verdict against U.S. student Amanda Knox and her ex-boyfriend for the 2007 murder of her British roommate. Knox was sentenced to 28 1/2 years in prison, raising the specter of a long legal battle over her extradition.

After nearly 12 hours of deliberations, the court reinstated the guilty verdict first handed down against Knox and Raffaele Sollecito in 2009. The verdict had been overturned in 2011 and the pair freed from prison, but Italy's supreme court vacated that decision and sent the case back for a third trial in Florence.

Sollecito, whose lawyers said they would appeal the verdict, was sentenced to 25 years. Reached by telephone, Knox's father, Curt Knox, said he had no comment.

While Sollecito was in court Thursday morning, he didn't return for the verdict, and the 26-year-old Knox was home in Seattle awaiting the decision with, in her own words, "my heart in my throat."

Sollecito's lawyers said they were stunned and would take their appeal to Italy's top court. "There isn't a shred of proof," said attorney Luca Maori said.

Presiding Judge Alessando Nencini ordered the 29-year-old Sollecito's passport revoked but made no requests for Knox's movements to be limited, saying she was "justifiably abroad."

Knox's defense team gave its last round of rebuttals earlier in the day, ending four months of arguments in Knox's and Sollecito's third trial for the 2007 murder of her British roommate, Meredith Kercher, in the Italian university town of Perugia.

Knox's lawyer, Carlo Dalla Vedova, had told the court he was "serene" about the verdict because he believes the only conclusion from the files is "the innocence of Amanda Knox."

"It is not possible to convict a person because it is probable that she is guilty," Dalla Vedova said. "The penal code does not foresee probability. It foresees certainty."

Dalla Vedova evoked Dante, noting that the Florentine writer reserved the lower circle of hell for those who betrayed trust, as he asserted that police had done to Knox when they held her overnight for questioning without legal representation and without advising her that she was a suspect.

Knox had returned to Seattle after spending four years in jail before being acquitted in 2011. In an email to this court, Knox wrote that she feared a wrongful conviction.

She told Italian state TV in an interview earlier this month that she would wait for the verdict at her mother's house "with my heart in my throat."

Knox's absence didn't formally hurt her case since she was freed by a court and defendants in Italy are not required to appear at their trials. However, Nencini reacted sternly to her emailed statement, noting that defendants have a right to be heard if they appear in person.

Sollecito, on the other hand, had made frequent court appearances, always in a purple sweater, the color of the local Florentine soccer club. He was in court again Thursday morning, accompanied by his father and other relatives and said he would return for the verdict. But he didn't come for the verdict. 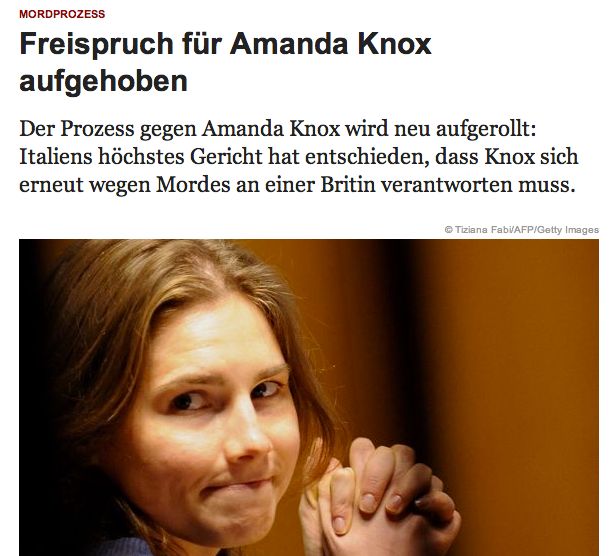