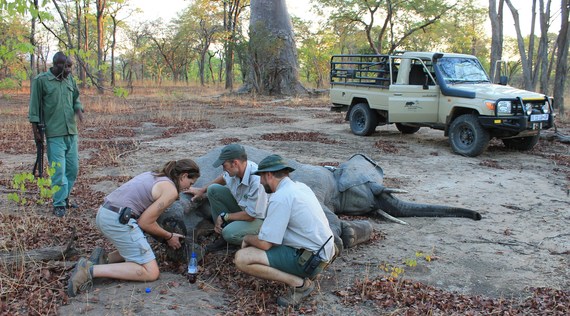 Malawi is a small country in southern-central Africa. Stationed there, Amanda Lee Salb, DVM, is the nation's first resident wildlife veterinarian. She began her work about three years ago, when she first came to the country to work for the Lilongwe Wildlife Trust (LWT) as the veterinarian at their rescue and rehabilitation wildlife center.

As part of her journey towards becoming a veterinarian, Amanda earned the following academic credentials: a Bachelor of Arts (BA) in Biological Sciences from Mount Holyoke College; then a Masters of Science (MSc) in Medical Science from the University of Calgary (where her research focused on Wildlife Epidemiology). Finally, she became a Doctor of Veterinary Medicine (DVM) through Louisiana State University.

After learning about her childhood, I'm not surprised by her career choice--who doesn't yearn to be engaged in a career they love? Amanda always enjoyed science and exploring nature as a child. It was typical for her to be out and about, playing in ponds, climbing trees, or catching frogs and insects for closer inspection. By the time she was in elementary school, she had memorized field guides for birds and mammals; by high school, her insect collecting paid off when she developed a prize-winning insect collection.

When it came time for college, Dr. Salb opted for her undergraduate alma mater, Mount Holyoke College, for several reasons. A strong Biology program (her first choice for a major), extensive opportunities for exploring different disciplines, and a supportive learning environment were all very compelling factors in her decision. "It was comforting and empowering being in an environment where a lot of women were interested in science and it was considered almost normal to pick up that cool bug and collect fall leaves in your textbooks."

Amanda first began considering a veterinary career while attending Mount Holyoke College. Initially she thought about becoming a physician, but after a period spent shadowing her grandfather (a medical doctor), she decided not to follow in his footsteps.

Prior to applying to veterinary school, Amanda decided to pursue a career in wildlife medicine. This specialization was confirmed as she gained more experience in veterinary school tending to wildlife and exotic animals.

In her role, Amanda wears many hats. Today, Dr. Amanda Lee Salb oversees the Wildlife Emergency Response Unit (WERU), a joint partnership between the LWT and the Department of National Parks and Wildlife (DNPW.) In addition, she manages the veterinary activities at LWT's Wildlife Center. Her official title is LWT Head Veterinarian and WERU Project Manager. Recently, her role at the LWT expanded to also include Head of Wildlife Rescue and Welfare. In this role, Amanda is responsible for developing the LWT's new national wildlife rescue service. The rescue service is all about improving the welfare of wildlife across Malawi through rescues of wildlife in trouble, implementing animal confiscations, and providing education.

I was fascinated by the Wildlife Emergency Response Unit and wanted to learn more. I discovered that the Unit was created to assist wildlife injured by poachers -- most often, this means treating snare wounds. All wildlife are potentially a victim to poachers, but thanks to Amanda and the many other dedicated individuals who assist in these rescue efforts, many animals are able to heal and return to nature...where they can continue to thrive. When asked what kind of animals she treats, Dr. Salb replied:

"Some of the wildlife who were being found injured from snares included endangered species like black rhinos, and flagship species like African elephants. Some of the animals I've treated as the veterinarian at the LWC include vervet monkeys, yellow baboons, common duiker, python, African lions, serval cats, side-striped jackals, African pygmy hedgehogs, chameleons, hingeback tortoises, and a variety of owls. Animals I've treated while in the field or at small reserves while running WERU include black rhinos, elephants, zebra, spotted hyena, waterbuck, and one really huge crocodile. Basically, I help out any wild animal that needs medical care."

Injured animal reports are forwarded from DNPW to Amanda. Often, injured animal sightings are first reported by park rangers or tourists. Amanda then coordinates the treatment mission with the Park Manager, and scouts to find and treat the animal. Treatment usually takes place in the field where it's more conducive to the injured animal's safety and comfort

For those thinking about this career path, Dr. Salb offers these insights for future wildlife veterinarians:

"While I had training and experience in zoo/wildlife/exotic animal medicine in the States, working with wildlife in the field is something else entirely. When you're in the field, there sometimes isn't anything between you and your patient, your patient is likely to run off if you aren't quick/quiet enough, and you usually don't get a second chance (at least not right away!).

To be effective in my job, I need to be flexible and imaginative; wild animals rarely want to follow MY plans and often have their own plans, to which I must adjust. Being very organized is also necessary so I can capture an animal, deliver the treatment efficiently, and then get out of there quickly so the animal experiences as little stress as possible. Having a sense of adventure helps as well; occasionally I have had to sneak up on black rhinos and elephants on foot in order to deliver medications. In those instances I am very excited and sometimes a bit nervous, but I have to focus in order to get the job done safely.

As a wildlife veterinarian, I love being able to work outside, get dirty, and appreciate the weird and wonderful fauna, big and small. Science and medicine has given us enough answers to be able to help these wild animals, while still sparking those countless questions that keep me thinking, learning, discovering every single day."

I'm so appreciative of individuals like Amanda Lee Salb who have dedicated their lives to this mission. I'm also thankful to the organizations that make this work possible. Africa's magnificent animals are a true gift to the world; I so enjoy seeing their beauty and splendor as they thrive in their natural environment.

Follow Diane on Twitter @HerSTEMCareer where she celebrates and champions STEM women from around the world. To learn more about women's colleges, visit Diane's blog, Advantages of a Women's College, where a complete listing of all women's colleges in the United States is provided. To understand why first-year STEM girls attend women's colleges, read the linked blog post I penned earlier. To understand why I'm blogging about STEM alumnae in 2016, read: New Year, New Focus: STEM Alumnae From Women's Colleges.