Right before I called Amanda to do this interview, I had muted my television. There was a car commercial on the screen, using as it's background music an iconic pop song by an '80s artist whom, I was fairly sure, never dreamed he would someday be selling cars with his music. When he wrote that song 30 years ago did he hope that the memories it evoked would be replaced by the knowledge that it was now being used to sell cars?

We're poised at an incredible moment in the world of art and commerce, because artists who have a robust fanbase actually do have a choice not to pimp themselves out for cars or shampoo or whateverthefuck. We're just taking baby steps so far into this new paradigm. It's almost like we're going back to the olden days when minstrels traveled the back roads and were given bread and wine by patrons who curled up by the fire and listened to their music. In a virtual, steampunky, postmodern way. The Internet is the campfire -- and it's the biggest campfire there ever was.

Unsurprisingly, Amanda Palmer is one of the first into the fray to create an ongoing income source with which to create art using Patreon, which was founded two years ago, per their site, "to enable fans to support and engage with the artists and creators they love. Empowering a new generation of creators, Patreon is bringing patronage back to the 21st century." Palmer, who's best-selling book The Art of Asking (Hachette) was published last year, has staked her career and her integrity on knowing exactly how and when to ask for help.

The Art of Asking, which I wrote about here, can easily be recommended to anyone who can read. At any age or in any walk of life. And as for her Patreon support, where Palmer has amassed nearly 5,000 people all over the world holding her up with virtual arms to make her art, this was no overnight success. This is directly the result of years of hard work, building an audience brick by brick, tweet by tweet, hundreds of club appearances with small eager crowds, lots and lots of in person connecting with fans late into the night after a show, crowd sourcing everything from musical instruments to a bed to sleep in overnight in a strange city.

And this is post-Kickstarter, where she had made a fearsome noise two years ago to crowfund her Theatre Is Evil album and tour. She had set her sights on 100K and made a million plus, biggest Kickstarter ever, broke the indie music world in half. And it almost destroyed her, because with big money comes big attention and mega-big problems, people who want to throw shit your way because you have the audacity to succeed.

"I still look at it as a kind of potential loss leader to make sure the fans really trusted me," said Amanda. "With the Patreon, one of the reasons I really wanted my schedule cleared before I put it out, which is why it took so long to launch it because I could have launched it in the last couple years. I really wanted to make sure that I had everything cleared off the deck, and immediately start making content and really roll with it." And so she has. So far she's delivered poetry, songs, videos, images, blogs, and plenty of interaction with patrons. Her most recent delivery is a song called The Thing About Things.

And as for her Patreon campaign itself? "Cue the inevitable backlash," she exulted, referring to the Kickstarter attacks of 2013. "But the backlash has never felt more irrelevant. It just doesn't matter. What is the backlash going to affect? This is just a direct story. It doesn't matter if people don't like this system. People who don't like this system simply aren't going to use it. The majority of those aren't my fans anyway and weren't going to hop on board anyway. At a time everyone criticized the Kickstarter. They didn't need to back it. It works anyway. The backlash is starting to seem more and more irrelevant."

"It does feel like every step that I have taken has culminated in this, which is the ultimate act of trust on the part of the audience. Part of my motivation when I was delivering the Kickstarter, and I mean all of the nitty-gritty bullshit that most of the mass media completely ignored because they were so enthralled with the romance of the million dollar number, but nobody was covering the stories when I was making and manufacturing all of the stamped journals and the hand-painted record players and the house parties all over the world some of which cost five or ten thousand dollars to deliver. I really went out of my way to over-deliver on the Kickstarter because I knew I was going to be back."

Now that Patreon has taken care of a way to get out All The Things she wants to share with the world, I asked her exactly what those things might be. "The obvious one is music. That's the nice thing about being a solo performer and piano composer and ukulele composer sometimes. I don't need to necessarily wait until my entire band is free and the studio is free and the producer is free and do everything in one giant fell swoop." She also plans to make and share essays, poetry, videos, films, performance art, and "weird inexplicable shit."

We need to create and ingest art so badly to keep us sane in a world that everyday appears to be spinning more and more out of control. How does Amanda Palmer stay motivated in a world where people get captured and tortured, where a plane crashes because a pilot is mentally ill and drives it into a mountain range, where people have terminal illnesses, where guns are in the hands of people who don't know how or when to use them?

"My yoga and meditation practice is really important to me. That's the number one thing that helps keep me going. I notice if I don't practice I find it much harder to stay balanced, literally and figuratively. I cling to my basic philosophy, which is suffering is optional and people are inherently good." She cited a favorite book she was currently revisiting, which she originally read in school years ago when studying holocaust literature. "It's called Man's Search for Meaning, by Viktor Frankl. It's unlike any other piece of holocaust literature. It is one of the most inspiring books I've ever read. It's also brutal. It's no holds barred. One of the most beautiful things I remember taking away from the book, and I think probably why I subconsciously went into a bookstore and re-bought it to reread it was one of his biggest takeaways from being in a concentration camp. The final ultimate human freedom that nobody can take away from you is the attitude that you choose to take to the situation that you find yourself in."

Further to the Patreon business model, it seems a little duplicitous that people will hem and haw and throw things to protest an artist who has the balls to crowdfund their art. Meanwhile these same people think nothing of major label artists with platinum records and who are able to support themselves that way. It's discourteous to ask for help. It's not normal. It proves that the 'star-making machinery behind the popular song' (thank you, Joni Mitchell) is perhaps not even necessary. Nothing scares the people that run the machine more than that. It becomes a matter of public outrage. Because we (some of us, that is) can't think outside the box.

"What if I were running a tech company? Would people have these same criticisms? What if I were just manufacturing sneakers? Would people have these same criticisms? Or is it something about art and people really feeling like art and commerce are so uncomfortable that I have to be in this mysterious middle spot in order to function?" Amanda ruminated. "It's really interesting stuff and I'm fascinated by humanity. I never really considered these things. It wasn't until I left my label and started having these conversations with people all the time, and I started seeing the paradoxes that are really hard to understand or try to understand why people are able to think simultaneously two ways at once."

There's a lot going on this year with Amanda Palmer. Besides continuing to create and share All The Things, she's currently touring England and Ireland until June 14th. She'll do two more shows stateside, in Woodstock on July 6 and in Providence on July 11. She's opening for Morrissey in San Jose on July 25. And then, she's going to finish crafting arguably her greatest work to date: a baby that she's collaborated on with her husband Neil Gaiman, due in September. 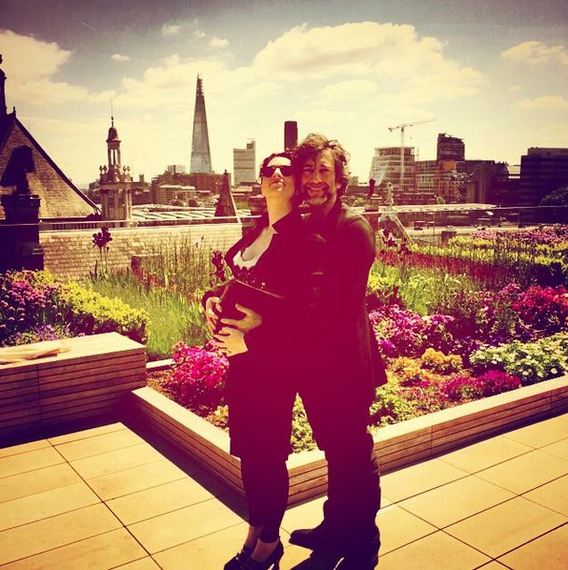 Neil and Amanda with their new project, 23 weeks old, via Instagram

Neil and Amanda recently co-edited the newest issue of The New Statesman which just hit the stands. The issue takes as its theme saying the unsayable, with many amazing contributors (Michael Sheen, Stoya, Hayley Campbell, David Byrne, Nile Rodgers, Nick Cave, Kazuo Ishiguro, to name but a few).

As the magazine went to press, there was a last minute miscommunication about the cover art they had chosen by the brilliant graphic artist Art Spiegelman and his cover art was withdrawn. It's a long, sad story and the rich irony of this being an issue about being able to say the unsayable is not lost. In their co-blog, Amanda and Neil summed it up thus: "We just wish we were as proud of the cover as we were of the content."

On June 8th, Amanda will present a patrons-only webcast live from London's Union Chapel: "lots of songs and talking, and a special chat with guest Caitlin Moran, hilarious UK author of How To Be A Woman and How To Build A Girl." The two US shows in July will be her last before the Morrissey show, and then "then off to the woods to give birth."