Amanda Todd, a Vancouver-area teenager who posted a story to YouTube last month about being cyber-bullied, was found dead Wednesday night in Coquitlam, Canada. Authorities believe she committed suicide.

Amanda's video tells a heart-wrenching story of the bullying she was subjected to -- both online and off. "In 7th grade," she begins, sharing her message on cue cards, "I would go with friends on webcam [to] meet and talk to new people." At one point, a stranger flattered her into flashing the camera.

One year later, a man contacted her on Facebook, threatening to send around the picture of her topless "if [she] don't put on a show." Terrifyingly, the stranger knew everything about her: her address, school, friends, relatives, and the names of her family members. Soon, her naked photo had been forwarded "to everyone."

Amanda developed anxiety, depression, and anxiety disorders, she says in the video, followed by a path into drugs and alcohol.

She changed schools and found a new group of friends in an effort to leave behind the bullies. Then the man created a Facebook profile, using her uncensored photo as his profile picture. "Cried every night, lost all my friends and respect people had for me... again... then nobody liked me," she wrote in the video.

Soon after, the bullying started again and she began to cut herself. Amanda moved to yet another school, where, after a boy began flirting with her, a troupe of girls from her first school came and beat her up. "Kids filmed it," she writes. "I was all alone and left on the ground."

"Teachers ran over but I just went and layed in a ditch and my dad found me." When she went home with her dad, she drank bleach in an attempt to kill herself, but was saved after a rushed trip to the hospital.

Amanda's bullying continued despite moving to a new city. Anti-depressants and counseling did little to combat the severe depression. The description on her YouTube video reads:

I'm struggling to stay in this world, because everything just touches me so deeply. I'm not doing this for attention. I'm doing this to be an inspiration and to show that I can be strong. I did things to myself to make pain go away, because I'd rather hurt myself then someone else. Haters are haters but please don't hate, although im sure I'll get them. I hope I can show you guys that everyone has a story, and everyones future will be bright one day, you just gotta pull through. I'm still here aren't I?

"It is a very sad case," Paul McNaughton, a principal at CABE, the high school she'd moved to in Coquitlam, told the Vancouver Sun. "I can tell you we feel we tried everything we could to help her when she came to us."

"She was quite connected here. The staff and the students here are very much impacted. She had some very strong ties in the school and to staff in the school."

A Facebook page titled Rest In Paradise Amanda Michelle Todd had nearly 11,000 likes at the time of this writing. The wall features countless messages of condolence. 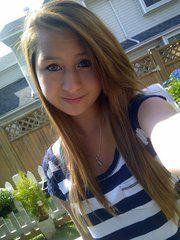