For most of its history, Rimini - established by the Romans more than 2000 years ago - was a sleepy provincial town on the Adriatic coast. 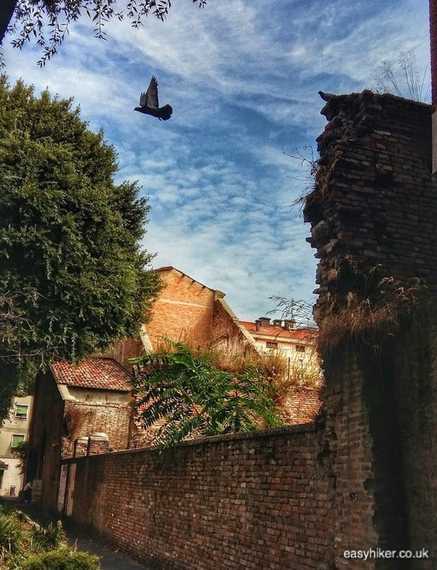 Within 20 years after the end of WWII, Rimini was to change forever. First came the Invasion Of The Northern Hordes, aka the birth of mass tourism. And then a local boy, the scion of a respected middle-class family, became the most famous movie director on earth.

His name was Federico Fellini and soon the whole world would know about Rimini: its sexually frustrated teenagers, its ridiculously self-important bourgeoisie and its equally ridiculously large-breasted women.

Only two of Fellini's films are actually set in Rimini, the early I Vitelloni and his most popular work, Amarcord ("I remember"). However, neither film was shot on site. Instead, Fellini used the studios of Cinecittà to rebuild his remembered Rimini. But all the recurring themes in Fellini's films (lust, sin and the loss of innocence) as well as many motives (the rituals of the Catholic church, the coast, the circus) reflect his experience of growing up in Rimini. For Fellini, Rimini is everywhere.

Rimini may not return the compliment inasmuch as Fellini is not everywhere in town. But he can be found. There are still places that connect the modern city to the sleepy provincial town of Fellini's youth. Here are five of them: 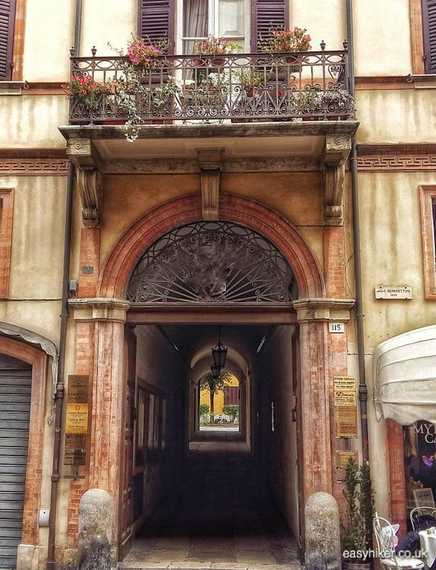 The Fellinis moved half a dozen times during Federico's childhood, but their flat in this building is the first one that Fellini actually remembered, as he later said. He was born in a house on 10 Via Fardanelli but had no recollection of the house and only remembered his father telling him "this is where you were born" when driving past in a horse-drawn carriage. (That house has since been torn down.) 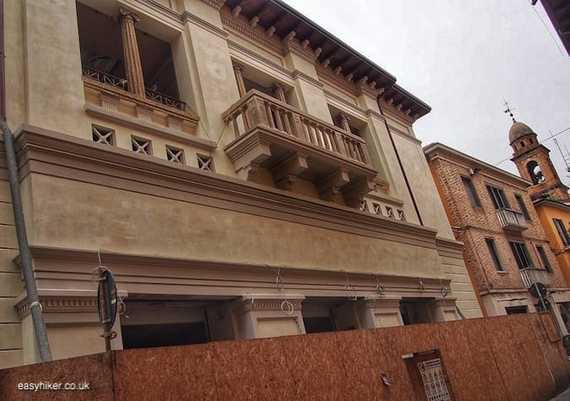 A place of pilgrimage for Fellini and his Hollywood-besotted friends. In the Fulgor, as Fellini later confessed in his book La Mia Rimini, he also touched up Gradisca (Amarcord's femme fatale), while sitting next to her in the audience, slowly shoving his hand further and further up her leg until, nonchalantly she turned to him and asked what he had lost and whether she could perhaps help him look for it. (Nowadays, he wouldn't be able to get into politics for that.)

The cinema is in a near-constant state of reconstruction and will eventually become a Fellini Museum, although nobody quite knows when.

Piazza Cavour provided the blueprint for the central town square in Amarcord. You may remember the Fontana Della Pigna (clearly recognizable also in the sets for Fellini's 8 1/2) for the scenes of the snowball fight and the peacock ... 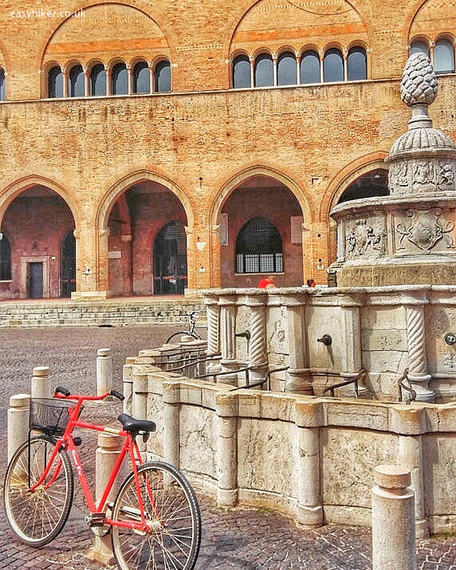 ... and the stairs of the Palazzo Arengo from the film's fascist parade. 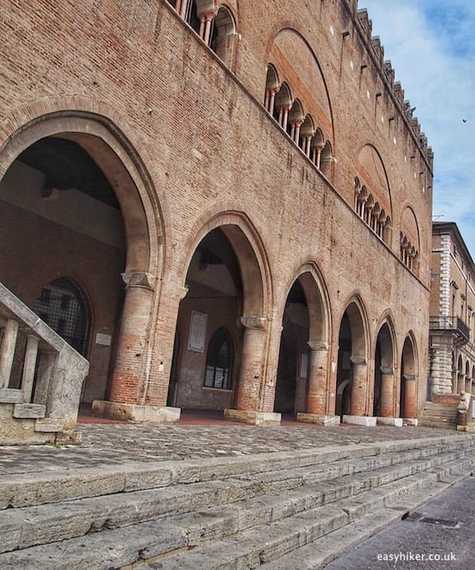 After his death, Fellini returned here for one last visit: his body was laid in state in the foyer of the Teatro Galli at the top of the piazza. 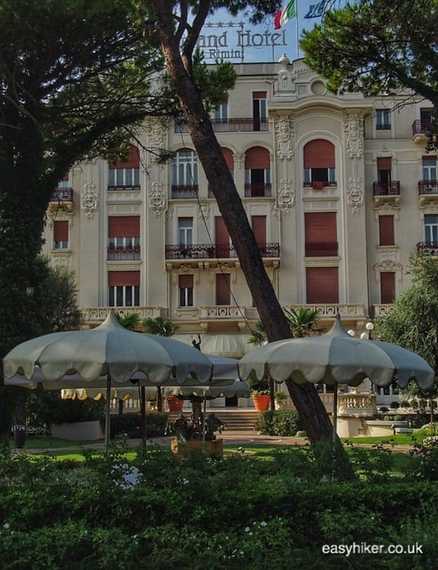 For young Fellini, the Grand Hotel - visited by foreign millionaires and aristocrats - was the very symbol of distant and unobtainable glamour. Later in his life, he made it a point to stay here on all of his return visits to Rimini (always in the same room: no. 315). This is also where he suffered the stroke that would eventually kill him in 1993.

Learned essays have been written about the role the sea played in Fellini's films. The Mediterranean certainly puts in numerous appearances, and one might imagine the relatively wild coast northwest of the Grand Hotel ... 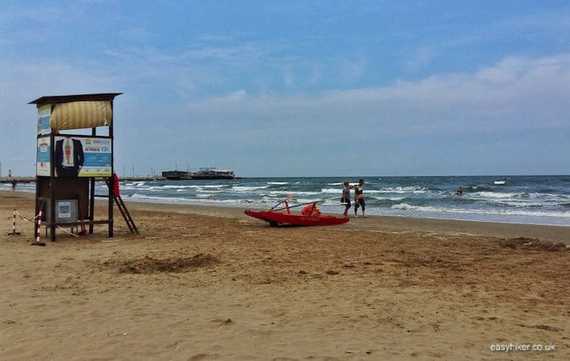 ... as the home of the terrifying Saraghina (in 8 1/2) who, it is said, was modelled after a local lady who lived rough in a beach cabin. Or as the place where the sea monster was beached - a real event in Rimini from 1935 - that clearly inspired the final scene of La Dolce Vita.

Further up the coast, however, the town's coastline was changed, changed so utterly in the 1950s when the "terrible beauty" of new Rimini was born. 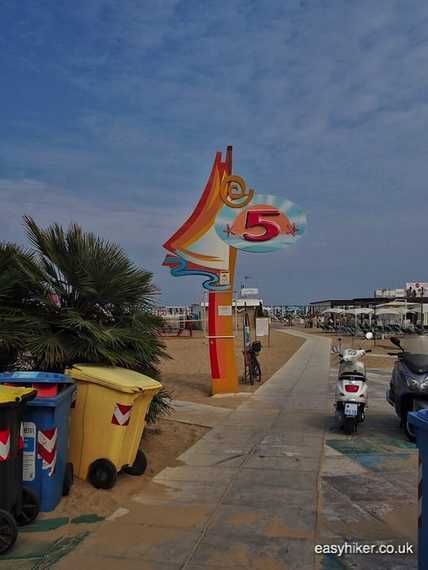 Fellini would later write in his autobiography that, having returned to conduct some on-site research for his book, he had failed to recognize the city of his own youth. This city, whatever it may have been like, has been lost for ever.

But for that, we shall always have Amarcord. 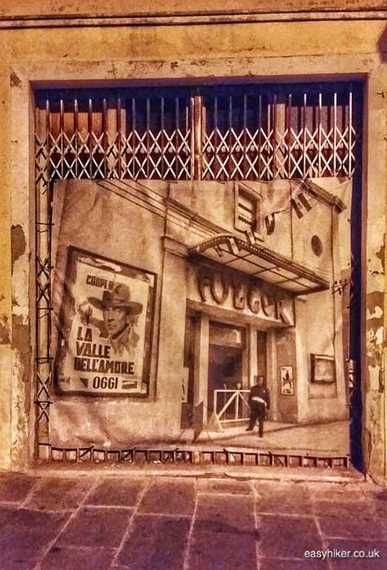 We hope this could serve as your guide in search of Federico Fellini on your next visit to Rimini. Check out Easy Hiker for more city walks and easy hikes in Emilia-Romagna