Up until late Monday night, the most famous punches thrown during the longstanding rivalry between the New York Knicks and the Miami Heat had failed to land. Amare Stoudemire changed that. During the 1998 NBA Playoffs, former teammates Larry Johnson and Alonzo Mourning had circled one another at Madison Square Garden before each fired off a few errant jabs and haymakers. Knicks coach Jeff Van Gundy infamously grabbed on to Mourning's leg in a foolhardy attempt to break up the melee. For more than a decade, that misguided peacekeeping ploy by Van Gundy seemed the most foolish moment in the Knicks-Heat rivalry. Amare Stoudemire may have also changed that.

Following the Knicks' loss to the Heat in Game 2, Stoudemire landed a blow to the casing of a fire extinguisher near the vistors' locker room at America Airlines Arena. A pane of glass in the case shattered and sliced open the left hand of the All-Star forward. In a scene described by Frank Isola of the Daily News as "complete choas," paramedics were called into the Knicks' locker room. Rachel Nichols of ESPN tweeted a photograph of blood stains on the carpet.

After leaving American Airlines Arena with his hand heavily bandaged and his arm in a sling, Stoudemire tweeted about the incident.

We all have done thing out of anger that we regret. That makes us human. Bad timing on my part. Sorry guys. This to shall pass.

I am so mad at myself right now, I want to apologize to the fans and my team, not proud of my actions, headed home for a new start

Among the many responses -- some supportive and others critical -- that Stoudemire's tweet received there was one from an unexpected source... the fire extinguisher.

On Tuesday morning, the frenzy around Stoudemire's self-inflicted injury had reached a fever pitch. At one point, the rundown of stories being teased along the left edge of the screen during episodes of Sportscenter read:

The coverage ran the gamut from the macabre (lots of images of the bloodstained carpet) to the absurd (an amazing GIF from SBNation). The back pages of the tabloids in New York where merciless in their treatment of Stoudemire -- who, coincidentally, injured himself during the 2011 NBA Playoffs with a pre-game dunk attempt.

On its back page, the Daily News declared Stoudemire to be a "Glasshole." 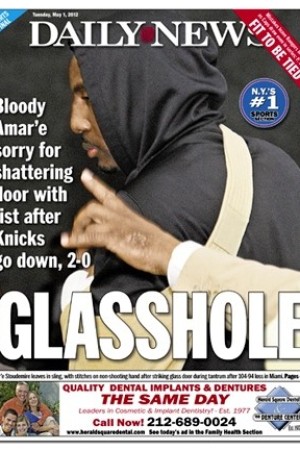 Racking more than 1,450 followers the Twitter account @AAAExtinguisher taunted Stoudemire, Knicks coach Mike Woodson and even Tim Tebow. Continuing with the anthropomorphizing of objects at the arena, Jason Gay at the Wall Street Journal presented an oral history of the hallway fracas that featured testimony array of of unexpected eyewitnesses. Among the highlights, the soda machine lauds Kobe for being polite and carrying exact change.

While the Fire Extinguisher meme will likely be short lived, the long-term impact of the momentary lapse of reason by Stoudemire remains to be determined.

According to ESPNNewYork, Stoudemire escaped ligament and tendon damage but will still miss Game 3 against the Heat. The source cited by ESPN stated that Stoudemire could still miss more time.

Howard Beck of The New York Times also tweeted that Stoudemire escaped serious damage. His source, however, ruled Stoudemire out for the duration of the first-round series.

If the team's starting power forward were to miss the remainder of the Knicks-Heat series (and given the New York's 0-2 deficit seems likely to be the remainder of the playoff run) there isn't exactly a consensus that this is terrible thing for the team. Zach Lowe at Sports Illustrated notes the extended struggles of the Stoudemire-Anthony lineups throughout the season and the success of the team during Stoudemire's injury-enforced absence in April. Similarly, Niel Paine points out at ESPN.com that the Knicks played to a 14-5 record during games Stoudemire missed and that Anthony played some of his best ball during that stretch.

Facing an 0-2 hole in the best-of-seven series and the most dynamic team in the game, the Knicks certainly seem in need of a hero. But are they also in need of hero ball? For as long as Stoudemire sits after his ill-thought punch, the Knicks seem likely to get at least one of these things.

UPDATE: Per ESPN, the Knicks have confirmed that Stoudemire will miss Game 3.