These touring feline circus performers leap. They jump through hoops. They play instruments!

And sometimes the members of the Chicago-based "Amazing Acro-Cats" quit doing tricks altogether and just go wandering out into the audience. But that's fun, too.

The troupe was founded by the cats' owner, animal trainer Samantha Martin, who also serves as ringleader as they perform in circus shows across the country. The Acro-Cats have already starred in a Target commercial, and given that their tour schedule is packed tight as sardines, they're probably coming soon to a theater near you.

Here are 11 essential facts about these talented cats. 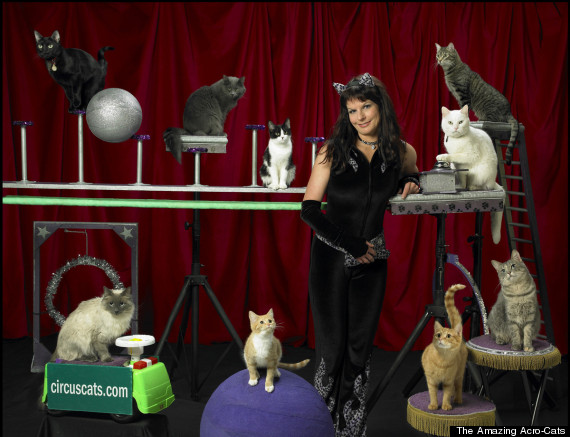 The Amazing Acro-Cats consists of 14 cats -- of which all but two are female. 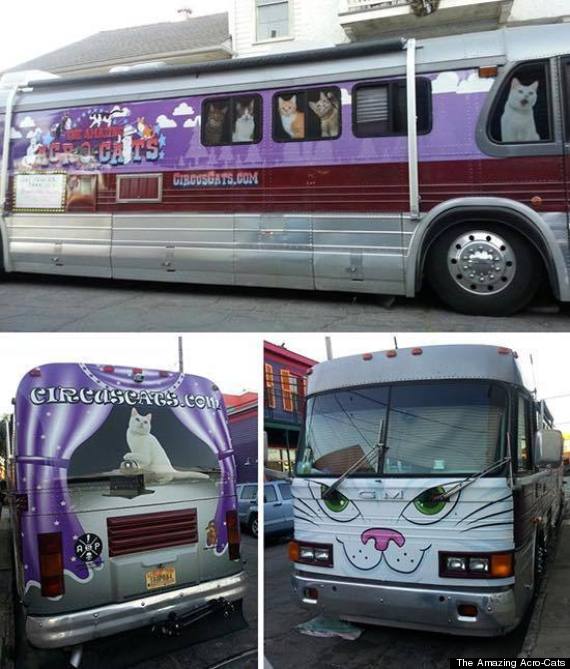 The Amazing Acro-Cats and their human helpers -- besides Martin, there's publicist Polly Smith and fearless assistant Seunga Park -- travel about 10 months of the year on a "purr-fect" 35-foot tour bus that is kitted out for the cats' maximum comfort.

The cats even get the on-board master bedroom, proving they "have more room than the humans," says Martin. 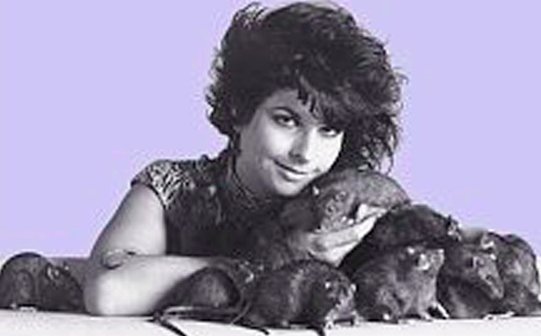 "I couldn't make a living on just rats," she says. So about a decade ago, Martin switched to cats, that other misunderstood, often underestimated breed of animal. She had been putting on cat shows at art galleries and other small venues, and began realizing felines might be a more sustainable venture.

The group includes a Guinness Book of World Records record-holder!

Alley the cat, who was rescued as a kitten from a Chicago alleyway, now holds the record for longest jump by a cat. 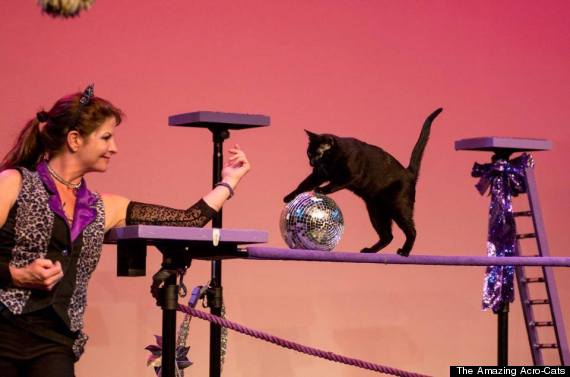 The cats and other performing critters are taught their tricks using only positive reinforcement, like clicker training and food treats. They're never scolded or punished.

"No one protests after they've seen the show," Martin says. "It's not cruel in any way." 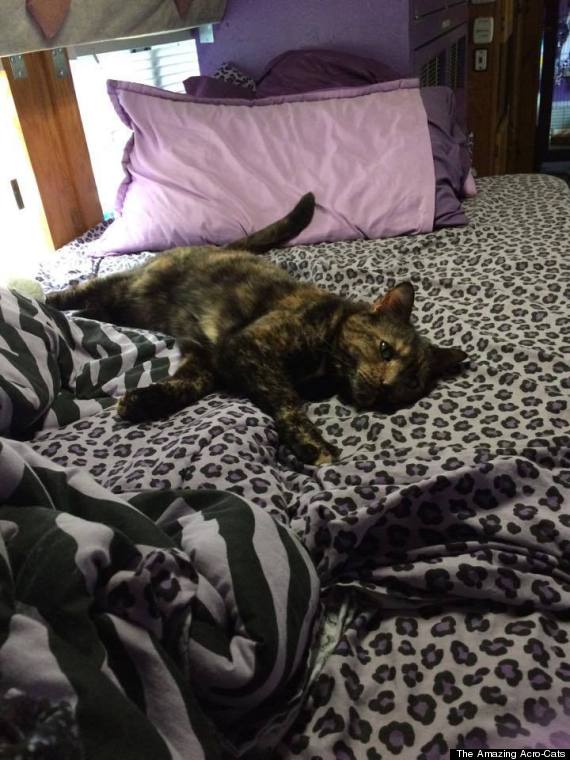 You may not be able to run off with the cat circus, exactly. But you can definitely participate!

Volunteers are used in each city to help out with the box office and wrangling cats between shows. And if you've got a pad where the kitties can crash for a couple of days between gigs, that's also very welcome -- as are folks who have some bus-fixing skills they want to donate.

It's an old bus, Martin points out. 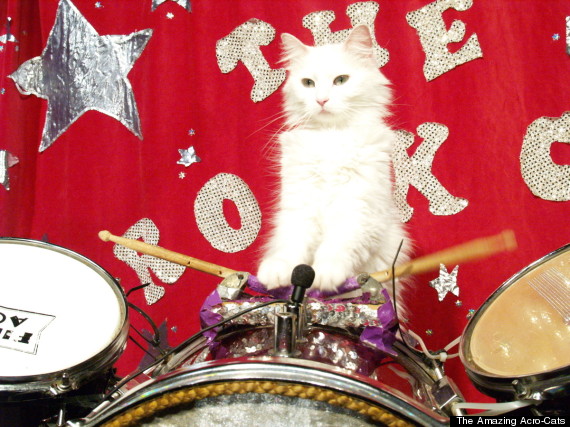 The Rock Cats are, as far as we know, the world's only feline rock band.

Tuna the cat is on cowbell. Sookie plays the chimes. Nue's on keyboards. Dakota hammers away on the drums. And, of course, Cluck Norris pecks away at the cymbals.

The result: a little dada. A little daffy. Completely delightful. 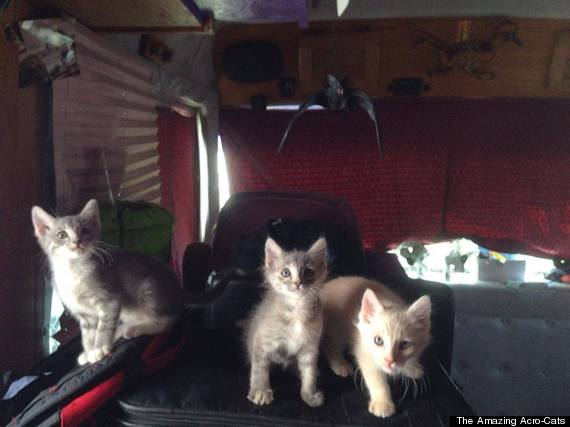 The Amazing Acro-Cats often travel with foster kittens who are available for adoption. In fact, since Martin has a special fondness for the teeniest kitties, the tour bus travels with an incubator.

All the babies get basic clicker training, Martin says, and most are able to high-five by the time they are dispatched to their forever families.

So far, 157 cats have been fostered and then adopted into permanent homes, Martin says. That should be 158 soon -- an adoption application has been put in in for a sweet little orange guy named Opie. 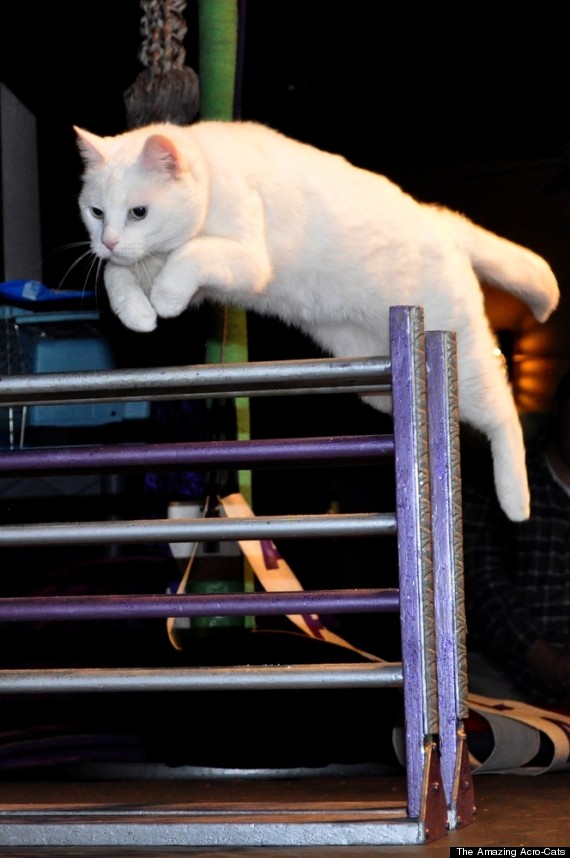 The Acro-Cats aren't just here to entertain audiences, though, certainly, they will do that. Martin is also using her feline circus to show folks that cats are really, really fun and trainable.

"I want to help people build a better relationship with their cat," she says.

To that end, Martin has devised a cat training kit. We can't promise your cat will do leaps one on command, but we're pretty sure you'll have a good time trying. 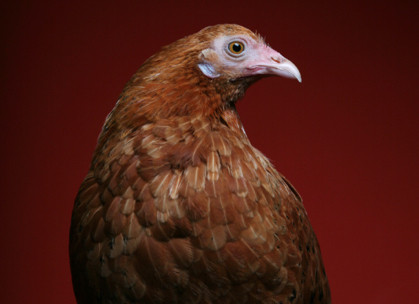 The cats can sometimes be a bit persnickety. As well-trained as they are, and as much fresh tuna as they receive as rewards, feline performers don't always feel like doing their tricks.

Cluck Norris, on the other hand, never misses her mark.

"You don't see cat circuses around because people can't stand the humiliation," says Martin, but "Cluck is a total professional. Has a good work ethic." 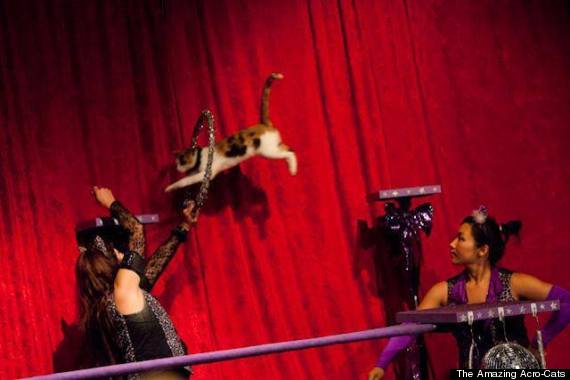 Home is an apartment in Chicago with a big screened-in yard, where Martin says she and the cats pretty much do the same things they do on stage in front of an audience. Jumps and tightropes are spread out across the living room, and the Rock Cats' instruments are set up in the kitchen, where they like to play while Martin cooks.

"This is what I would do at home," she says, wearing a cat ear headband and gesturing toward one Acro-Cat climbing up a tower. Another is seated at a set of drums, while several more sit on scraps of purple carpet -- their "marks" -- and another perches, waiting to be rewarded. Cluck Norris is napping in her carrier, and Garfield the groundhog is running laps around the room, pausing only occasionally to be petted.

But as fun as it is being home, getting back on the road is also a good time for Martin and the rest of the gang.