On Maui, the search continues for a young humpback whale that was seen having trouble swimming due to fishing line wrapped around its tail.

Fishing line is a huge danger for marine life. It can strangle or weigh down smaller sea animals, such as dolphins, sea lions and turtles, and can cause a slow, painful death for whales that drag the line -- and the fishing gear attached to it -- for an average of six months before dying. According to the Pacific Whale Foundation, young whales like the one missing off Maui are more susceptible to entanglement because they try to play with the gear.

But not every fishing line encounter ends in tragedy. Sea life caught in fishing line often lend themselves to some of the most beautiful and dramatic animal rescues. Here is a look back on the last two years of fishing line entanglements that began tragically, but ended happily.

Fisherman GoPros His Rescue, Virginia Beach, July 2013
Pat Foster and Adrian Colaprete had exactly what they needed when they encountered a Northern right whale entangled in rope and dragging fishing gear: a really big knife and a GoPro. Northern right whales are extremely endangered. With his camera strapped to him, Colaprete dove down to cut the whale free. It seemed as though the behemoth knew what he was doing. "As soon as the whale caught up past me and I was parallel to its face and eye, it kind of stopped, which was a trip.”

Grommet Sticks With Foggy, Nova Scotia, September 2013
When Foggy the humpback whale became entangled in fishing rope off Nova Scotia, her best friend Grommet did not leave her side. Foggy had rope around her head, blowholes and tail, and was dragging lobster traps. As crews worked for hours on freeing Foggy, Grommet patiently waited. And as an observer from a whale watching boat wrote afterward, "The instant the rope came off Foggy’s head, Grommet dove, and then burst from the water in a spectacular breach." The two whales then swam off together. 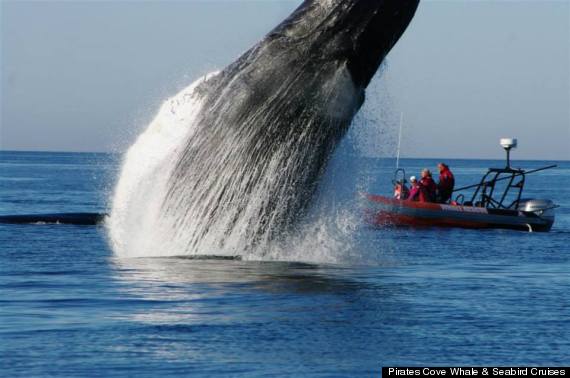 Gray Whale Drags Net Of Dead Fish, Dana Point, March 2012
A California gray whale dragged a fishing net for a week before rescuers found the distressed cetacean. The net contained a “whole ecosystem” of dead animals that the whale had been forced to drag, including a sea lion and a 5-foot shark. A crew spent seven hours cutting nylon to free the whale before it was able to swim away. “Usually the whale does not make it in this type of situation,” an emotional volunteer told reporters.

Sea Lion Shot With Dart Gun To Be Saved, Canada, October 2013
Last month, a veterinarian made what he believed was the first successful sea lion disentanglement rescue done with a tranquilizer gun in Canada. The sea lion was being strangled by plastic string wrapped around its neck. The vet shot the dart gun from afar to tranquilize the sea lion. After it was asleep, rescuers worked on cutting away the strings. Veterinarian Martin Haulena speculated that the string had been used to wrap fish boxes.“On its own it looks so innocuous, but you can see the severe injury caused to the sea lion.” The lion had bright red lacerations underneath where the string had been. After it woke, the sleepy guy slid back into the water and swam off, finally free from pain. 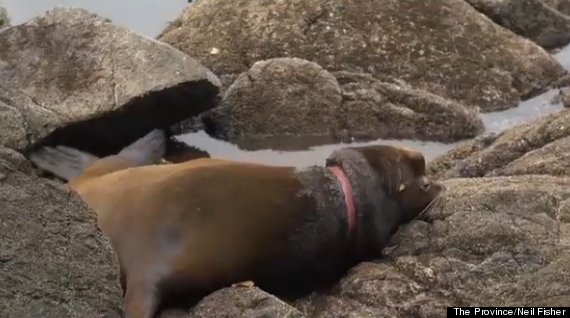 Dolphin Asks Divers For Help, Kona, January 2013
A bottlenose dolphin swam up to divers in waters off Kona, Hawaii with a fishing hook stuck in its pectoral fin and line coming out of its mouth. As though it were asking for help, the dolphin rolled over on its back and stuck the fin in front of the divers. After the divers cut the line, the dolphin swam to the surface for air, then returned to them so they could finish untangling the line. More evidence that dolphins are often smarter than people.

Divers Find Four Trapped Whale Sharks, Indonesia, November 2012
Why save one whale when you can save four? Divers in Indonesia got the surprise of a lifetime when they encountered four whale sharks caught in a fishing net. The enormous creatures were freed by pure teamwork as the group of divers cut the sprawling net open, after which the gentle giants stayed and swam with the divers, letting them hold on to their fins and even sticking around for an underwater hug.

Visit the Pacific Whale Foundation to see how you can help protect sea life from entanglement, and check out Monterey Bay Aquarium Seafood Watch’s list of seafood most and least likely to come from sustainable fisheries.

Amazing Whale, Dolphin And Sea Lion Rescues Show The Tragedy Of Irresponsible Fishing
Hurricane Sandy Animals Rescues
1 / 10
A dog named Shaggy is handed from a National Guard truck to National Guard personnel after the dog and his owner left a flooded building in Hoboken, N.J., Wednesday, Oct. 31, 2012, in the wake of Hurricane Sandy. Some residents and pets are being plucked from their homes by large trucks as parts of the city are still covered in standing water.
Craig Ruttle, AP