It began with a lamp, or should I say -- a lack of a lamp. Many years ago, I'd purchased two bedside lamps from Ikea. Now, after a few fixes, one had gone to the home furnishing graveyard -- leaving my wife's side of the bed in darkness. It was time to grab the tool belt and keyboard and become: Home Fix-It Man! Cue dramatic music.I took a brief spin though Ikea's website, but was quickly reminded that Ikea somehow is lacking the online gene. Their entire ecommerce experience is terrible in ways I can't even begin to describe. Suffice it to say, it's all of the stress of shopping at Ikea, but in the end -- your shopping cart is empty. And, frankly my tastes had moved a bit more upscale since the last figures were purchased -- I wanted nice fixtures.

Next stop -- Amazon. Amazon has built exactly what Jeff Bezos set out to build -- "The Everything Store" as so well chronicled in Matt Stone's new book. So, a few clicks later I was looking at Wall Sconces, Modern, 4 Stars or Better, Amazon Prime Shipping. The choices were in the hundreds, and narrowing by price and type of metal didn't help much. Quickly -- I found a great offer; $49 (stunningly low) with good reviews, and one click later -- my shopping was done.

If only it was that simple.

Two days later I was installing the new wall fixture, only to find that my wife quickly pronounced it " too hot!" I tried to shrug it off, but she was right. They were damn hot. So, back they went.

Now here's a place where Amazon has made a part of the retail process that was formerly terrible a breeze. Anyone who ever tried to return something to the now thankfully defunct Circuit City remembers the walk of shame and accusatory interrogation whenever anything needed to be returned or exchanged. Amazon simply smiles and give you your money back -- a breeze.

The only problem was -- I still didn't have bedside lamps. And here frankly, I was now overwhelmed with choice, and lacking information. Halogen or LED? Dimmable or not? What's the difference between $149 and $649? Would it hold up? Did it feel good. Try as I may to buy from Amazon, lighting -- and I dare say a growing list of categories -- can't be purchased on Amazon. Certain products need to be seen and touched. And Bezos' Everything Store has crowded Amazon's shelves with such massive stock, the the number of options without guidance or curation is becoming overwhelming.

So, the next weekend -- I headed down to the Mecca of consumer lighting -- Lighting By Gregory on the Bowery in New York's Lower East Side. I have to confess, I have a bit of longstanding problem with what my family euphemistically calls "lighting land." When I go there, my credit card seems to levitate from my wallet and into their bank.

After hours of googling and amazon shopping -- I was discouraged. But the Lighting By Gregory salesman was immediately optimistic. 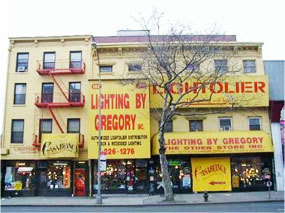 I'd find a dimmable LED light, modern, and not that pricy -- he had choices. The cloud lifted. One manufacturer who I liked he told me, in a hushed tone, was having "money troubles" and he wouldn't recommend. Ah -- knowledge! I was saved from the rabble of Amazon's bounty. After half an hour of turning lights on and off, and exploring color temperatures and heat output -- I zeroed in on a lamp I liked. Three times the cost of my Amazon bargain light that had been returned... and told the salesman to ring it up. A few minutes later he was back -- sullen. It was out of stock, ordering it would take weeks. He didn't even try to save the sale -- he knew I was in search of instant lighting gratification.

I went in with no intention to be one of those "showrooming" customers who visit a store and they slyly buy online. But there I was, snapping a picture of the lights model number -- so I could go online and complete the purchase.

Hours later the deed was done. Amazon, of course. Same price as retail -- not a penny cheaper -- and free shipping. As I closed the shopping cart I wondered, why had I simply not found this model within Amazon's bounty? I looked again, it had been there -- among the thousand choices, with a thin description and confusing consumer comments ("dimmable?" one said yes, another "No"). But Lighting By Gregory was curated and experienced. They only stocked quality goods, and their salesmen knew their products.

Two days later -- Amazon's shipment arrived. The lights were perfect, installed and working in an hour. Home Repairman was able to return tools and hero's cape to the closet.

Yet in hindsight, I couldn't help but think how much waste there was in the entire effort. The shipping and return of the first poorly chosen item, the salesman and overhead of Lighting By Gregory that wasn't recouped, the salesman's inability to point me to Amazon or another online retailer and get paid for the referral. Amazon shipped from Build.com, why couldn't Gregory point me there with an affiliate number?

Brick and mortar retail and online shopping need each other. In a world of infinite choice and overnight fulfillment -- the wasted cycles on the item-return carousel are not only bad for the environment, but also for customers, and bad for business.

So, while Amazon is building the ultimate end-run around curated retail -- another web behemoth is looking for a better way. What exactly is eBay Now? And why did I need to go to Katz's deli to find out? That's part two:

Part 2: "Why Can't We All Just Get Along? eBay and Local Retail Go Steady" (HERE)