A bitter public feud with a book publisher, eviscerating segments by Stephen Colbert and reports of terrible warehouse working conditions don't seem to be having much effect on how Americans feel about Amazon, according to a new survey.

Amazon, the world's largest online retailer, kept its spot as America's favorite brand in YouGov BrandIndex's semi-annual ranking of how U.S. consumers feel about some of the biggest global companies. The market research firm released the rankings on Wednesday.

Amazon was already number one, having bested Ford at the end of last year, when BrandIndex last released what it calls its U.S. Buzz Rankings. 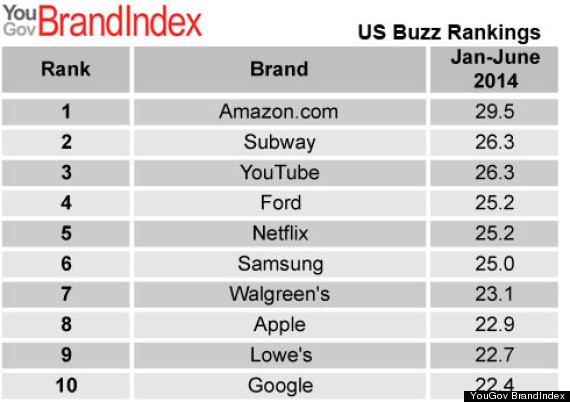 But a lot has happened since then. Amazon and Hachette, the fourth-largest book publisher in the U.S., have been locked in a dispute over the share each company is to get from e-book sales. According to The New York Times, Amazon is responsible for 60 percent of Hachette's e-book sales.

As negotiations have faltered, Amazon has tried pressuring Hachette by removing presale buttons from some Hachette titles and delaying shipping times on others.

This has enraged many Hachette authors, including Stephen Colbert, who said last month on "The Colbert Report" that "because of Amazon's scorched-earth tactics, more people are getting screwed than in Fifty Shades of Grey."

All of this bad publicity doesn't seem to have hurt Amazon. At least not yet.

"People tend to focus more on the good aspects that they hear about Amazon and are perhaps more forgiving of any negatives they might hear," Marzilli told The Huffington Post.

But as Amazon continues to grow -- and as more disputes with suppliers and reports of terrible working conditions become public -- the company could risk losing popularity.

"As you become bigger and people no longer look at you as the underdog or the upstart, but rather as the established player and the big guy on the block, that's when they start to look for the next upstart or underdog to cheer for," Marzilli said. "And as a consequence, they might be a little bit more likely to focus on the negatives or remember some of the negative things they've heard."

The latest rankings -- which BrandIndex determined by asking more than 4,000 people in the U.S. each weekday if they've heard in recent weeks anything positive or negative about certain brands -- are a mixed blessing for Amazon. "Kindle," Amazon's brand of e-readers and tablets, fell off the top 10 list in the latest survey.

This is sure to upset Jeff Bezos, Amazon's notoriously cantankerous founder and CEO. At the launch of the company's first smartphone last month, Bezos boasted that Amazon had two spots on YouGov's BrandIndex.

"It's not easy to get two brands on this list," Bezos told a crowd of journalists, analysts and Amazon customers.

Turns out it's just as hard to keep two brands there.

YouGov conducts daily polls for The Huffington Post, but the BrandIndex research was not part of that partnership.