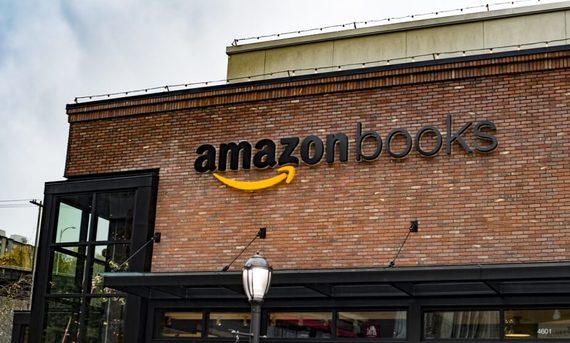 While the rampant mayhem of our beloved political process has diverted everyone's attention from both ISIS and whether they should follow the Paleo Diet, something else has been afoot that Americans haven't noticed: Amazon, after single-handedly obliterating most brick and mortar bookstores in the country, has been quietly opening brick and mortar bookstores of its own.

Life in the Boomer Lane knows that you have temporarily diverted your own attention away from CNN and/or the latest Hysterical Trumper Tweets, long enough to read this post. Why on earth, you ask, is Amazon doing this? Isn't that sort of like the Ford Motor Company, after introducing the automobile to the world and precipitating the demise of the horse and carriage era, would suddenly start creating horse farms, and producing both carriages and large-size pooper scoopers?

Maybe so. Or maybe not. Amazon has discovered that selling people books and random stuff online may be extremely lucrative, but it runs a distant second to ruling the world. Just ask any of the folks who have attempted to rule the world over the course of history. Most of them tried to do so even before anyone invented the internet. Some of them even attempted to do it before anyone invented guns or proper camo wear. Of course, the advantage these earliest world ruler wannabes had was that they thought the world was a lot smaller than we know it is now. They conquered some ratty villages within walking distance of their own (lacking proper military footwear, in addition to everything else) and immediately invented the phrase "world dominance."

Amazon was a lot smarter. It waited until people could first be sucked into the concept of Christmas shopping without ever having to look for a parking space. Soon, packages started miraculously arriving at doors all over the country. People forgot they were the ones who had paid for these items in the first place and were unaware that they were spending all of their retirement money on a lot of stuff that they or anyone else didn't need. Amazon realized that it had the ability to rule.

Online sales were just the beginning. Next came entertainment and media. The Kindle meant you could travel wherever you wanted and carry around 1000 books at a time. And, unlike anything made of actual paper, you could then turn your Kindle on and read US magazine, while everyone around you assumed you were reading Being and Time, by Martin Heidegger. It also meant that it was only a matter of time before films and TV shows would follow. (Readers note: "Mozart in the Jungle" is swell. Watch it.)

Buying everything through Amazon was like being a member of an elite club, one that couldn't turn you down, as long as your VISA card was viable. Everybody joined Amazon Prime, which does something very special that LBL isn't quite clear about. LBL only knows that for a tidy sum each year, she gets free rush shipping of whatever she orders on Amazon. She wasn't aware that she needed anything rushed to her, until that option was offered to her. Now she demands that everything be rushed, even when the item ordered is a birthday present for a grandchild, being purchased six months in advance. Because Amazon now has secret delivery stations all over the country (LBL is quite sure that one of them is behind the tree on her front lawn), items can be delivered even before they are ordered.

Bookstores were a logical next step, not because Amazon needed bookstores but because bookstores sealed the deal on world domination of the book industry. Think of it this way: Napoleon probably didn't need Russia. The Russians were rather uncouth, compared to the French. Their weather wasn't as good, their culinary skills were stalled at raw pig fat and meat jello. Russian women weren't nearly as hot as French women, and everyone started drinking vodka as soon as they woke up in the morning. But Napoleon looked east, saw Russia and decided that he couldn't rule the world without conquering it. In fact, over the entire history of the planet, virtually every territory except New Jersey has been conquered and occupied by someone.

In its quest for world domination, Amazon opened its first bricks and mortar store in Seattle a few months ago. Plans this year are for 400 more stores across the country. Barnes & Noble, the only big chain of bookstores that remains, has 650 physical stores remaining across the U.S. The company isn't doing well here anymore, so with Amazon now breathing down its neck, one can imagine that the days of Barnes & Noble are numbered.

Do not believe that books, online shopping and entertainment are the end of it. LBL has obtained secret documents pertaining to Amazon's plan to take over the world. It includes the following plans:

Amazon Delivery Services Having mastered the art of merchandise delivery, Amazon has turned its attention toward expectant parents. No need to deal with the muss and fuss of your standard hospital delivery. Amazon will deliver your baby to your door and dispose of the afterbirth. As always, Prime members will not have to pay extra for rush delivery.

Amazon Travel Amazon is, as you read this, negotiating to purchase Cuba and turn it into a private club for Amazon Prime members

The Amazon Party This will be a new political party, in which all candidates' debates and voting will be done online. If one doesn't like a particular candidate, one can minimize said candidate on one's screen and use Amazon Twitter Services to say rude things to said candidate. The Amazon Party will be neither liberal nor conservative, but will create a new category of voter, called "consumer." Amazon Prime members get to vote twice.

Amazon Cruise Lines Amazon will eventually control all sea lanes and will immediately sue the Amazon River for name infringement.

Where will this all end? The answer is, it won't. But this post ends now.