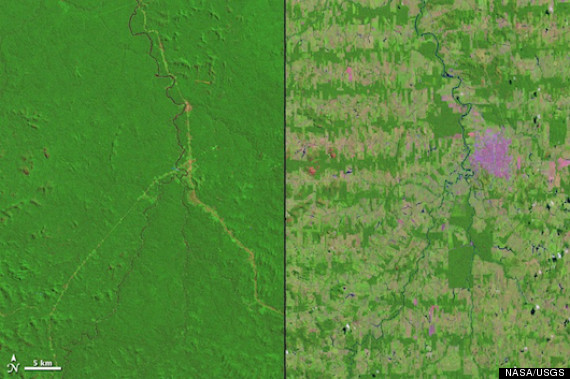 MISSING THE FOREST FOR THE TREES: NASA reveals 37 years of Amazon deforestation by juxtaposing satellite photos of western Brazil taken in 1975 and 2012.

As the 2012 Summer Olympics draw worldwide attention on London, a newly released pair of satellite photos highlights a nagging environmental problem for the host of the 2016 Olympics: deforestation of the Amazon rain forest in Brazil.

Taken by NASA's Landsat 1 satellite in 1975 and 2012, the two images reveal dramatic effects of clear-cutting for roads and agriculture in Rondônia, a rural state in western Brazil. This process began with the construction of a major north-south highway in the 1970s, according to NASA's Earth Observatory, followed by secondary roads through dense forest at right angles to the first road. As settlers continued expanding over the decades — first by cutting down trees, then burning ground cover — their merging agricultural tracts took on a "fishbone pattern," as NASA describes it.

The rate of Amazon deforestation is now much slower than it used to be, having fallen nearly 80 percent since its most recent peak in 2004 (see graph below). Yet roughly 224,000 square miles of the rain forest have still been lost since 1980, including more than 1,000 square miles per year in Rondônia from 1980 to 1992. And according to research by NASA biologist Compton Tucker and Michigan State forestry expert David Skole, deforestation speed isn't necessarily the most important stat to measure.

"Because these roads cut deep into the rain forest and then spread outwards, there's a much greater loss of habitat and species than if there was a single area of deforestation," Tucker says in a NASA statement accompanying the photos, "because the amount of edge is critical for biodiversity."

Even at relatively slow rates of destruction, the effect on biodiversity can be devastating if wildlife habitats are fragmented — a distinctive effect of Rondonia's fishbone pattern, Tucker and Skole found, because it creates more exposed edges between clear-cut areas and intact forest. These "edge areas" not only suffer more from wind damage and desiccation, but they also provide humans with easier access for hunting, poaching, animal capture and logging.

In recent years, the focus of deforestation in Brazil has shifted from Rondônia to the eastern states of Mato Grosso and Pará, where large swaths of forest are being cleared for mechanized agriculture rather than small farms. According to data released Thursday by Brazil's National Institute for Space Research (INPE), Rondônia lost 14.5 square miles of rain forest in July and averaged 8.8 square miles over the past four months. By comparison, Pará lost 35.9 square miles in July and has averaged 18.1 per month since April, while Mato Grosso's numbers were 19.7 and 30, respectively.

The graph below shows overall deforestation of the Brazilian Amazon (in square miles) between 1988 and 2011, according to satellite data collected by INPE: 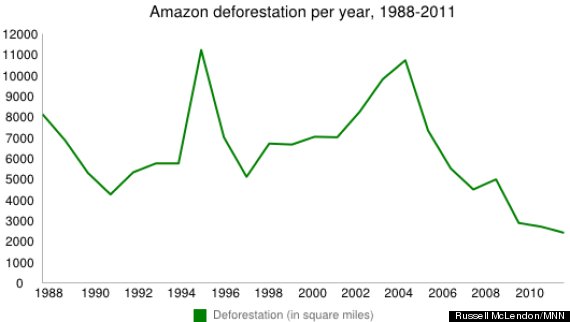 Aside from drawing attention to the ongoing issue of deforestation in Brazil, NASA released the pair of satellite photos above to mark the 40th anniversary of Landsat 1, which was first launched in July 1972. To see more highlights from the satellite's 40-year career, check out this NASA gallery of Landsat's greatest hits.