The problem is, nobody seems to be buying them.

IDC, a technology market research firm, said that shipments of Amazon’s Fire tablets fell by more than 69 percent during the three months that ended in December, compared to the same period in 2013.

The entire tablet market shrank in those last months of 2014, a first since the devices went mainstream in 2010, IDC said. But Amazon in particular got crushed. 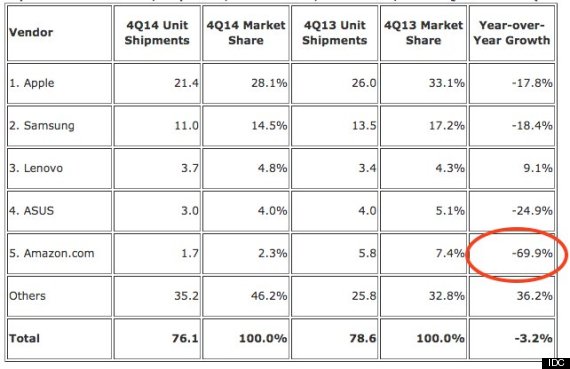 (The 6-inch version of Amazon’s Fire HD, the budget tablet that starts at $99, wasn’t included in IDC's estimates. The firm considers a device a “tablet” only if its screen sizes measures between 7 and 17 inches.)

Jitesh Ubrani, a senior research analyst who tracks tablets at IDC, said Amazon was especially hard-hit for two reasons. One, because the online retail giant's tablets aren't available in many physical stores, thereby preventing people from trying out the devices before buying them. And two, because there are a lot of other good tablets priced similarly.

“Other vendors caught up and were able to offer better value at lower prices, and it's really hurt Amazon's performance,” Ubrani wrote in an email to The Huffington Post. “We have seen some very competitively priced tablets from HP, RCA, E FUN and many others, and they are all eating into Amazon's share.”

A spokesperson for Amazon reiterated that the IDC report omitted the $99 Fire HD 6, which she called “our most affordable tablet ever” and “one of our high-volume products.” Amazon, however, declined to give sales figures for its tablets.

It’s been a particularly bad 12 months for Amazon’s hardware business. The highly anticipated Fire Phone, the smartphone Amazon announced to much fanfare in June, has sold abysmally. Amazon had to take a $170 million charge related to unsold inventory and “supplier commitment costs.”

The phone started at $199 on a two-year contract with AT&T, the exclusive carrier, but Amazon slashed it to 99 cents just a few months after it came out.

Bloomberg reported Monday that Amazon may be interested in buying a number of locations from Radio Shack, which may be in the process of negotiating a bankruptcy deal with Sprint. If Amazon owned a bunch of stores, potential customers could try out hardware before committing to buy it.